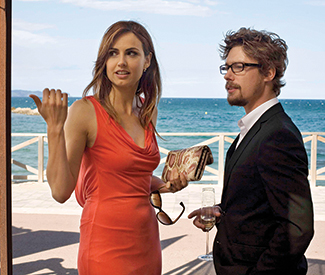 FILM Foodie movies — a perennially popular genre, thanks to standard-bearers like 1996’s Big Night and 1994’s Eat Drink Man Woman — are having a particularly heady moment. There’s Steve Coogan and Rob Brydon’s travelogue The Trip to Italy — as full of hilarious impressions as it is delectable pasta dishes — which screened to appreciative crowds at the San Francisco International Film Festival; and Jon Favreau’s food-truck comedy, Chef, poised to open locally May 16 after taking the audience award at Tribeca.

Beyond narrative films and documentaries (see: 2011’s hugely popular Jiro Dreams of Sushi), there’s intense interest in celebrity chef culture, which has crossed over into pop culture with the success of shows like Top Chef and Anthony Bourdain: Parts Unknown, not to mention gossip sites’ breathless reporting on food trends (is the cronut craze over yet, or what?). In late April, Copenhagen’s Noma was named numero uno among the San Pellegrino World’s 50 Best Restaurants, aka “the Oscars of fine dining,” per CNN. But no restaurant was more lauded in its lifespan than Ferran Adrià’s legendary El Bulli, which closed in 2011. Naturally, someone made a documentary about the joint — on Spain’s Costa Brava — and now there’s Tasting Menu, an ensemble Euro-comedy that takes place at “Chakula,” a 30-seat restaurant on Spain’s Costa Brava that’s about to serve its final meal.

Why is the apparently successful Chakula closing? Gorgeous chef Mar (Vicenta N’Dongo) isn’t saying, nor is she revealing the final menu — and neither is director and co-writer Roger Gual (2002’s Smoking Room). We catch glimpses of artfully plated dishes as they’re assembled in the kitchen and whisked around the seaside dining room (and get one descriptor: “Snail caviar”), but this ain’t Like Water for Chocolate-level cooking porn. Gual is mostly concerned with the diners themselves, all of whom are rich, well-connected, or lucky enough to have scored the most exclusive reservation on the planet. Alas, there’s not a truly compelling personality among them, though an impish widow (Fionnula Flanagan) who dines with an urn containing her husband’s ashes, and a mysteriously morose man (Stephen Rea) who may or may not be a food critic, come the closest. (The Spain-set movie was mostly filmed in Ireland, hence the presence of these Irish stars.)

Elsewhere, there’s estranged couple Rachel and Marc (Claudia Bassols and Jan Cornet, the latter last seen undergoing an epic transformation in 2011’s The Skin I Live In) whose passion is reignited in the presence of snail caviar; a nervous maître d’ (Andrew Tarbet) charged with overseeing the top-secret surprise dessert; a pair of grouchy Japanese businessmen who are competing to take over the restaurant after Mar steps aside; and assorted other stereotypes and rivals tossed in to bring tension to what’s essentially a pleasant-yet-woefully-unexciting dinner party, filled with guests who linger much longer than they should. Last-act excitement enters, kinda, when a boat sinks just offshore and the assembled company rushes to help, but by then there’s no saving Tasting Menu, whose blandness comes into face-slapping focus when Flanagan’s character counsels the romantically confused Rachel to “just follow your heart” and that “there’s nothing more precious than freedom.” Burrrrp. *