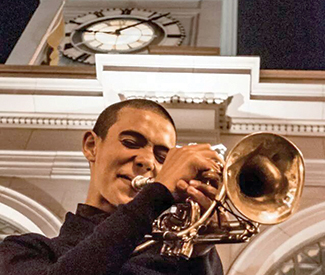 If you’ve spent time in downtown San Francisco, chances are you’ve seen him: thin as a rail but dressed to kill, light on his feet in squeaky-clean dress shoes amidst the grey monotone of Market Street, he takes a deep breath in — and when he breathes out, into the mouthpiece of his trumpet, the sound is pure confidence, come to sonic life.

Then he starts tap-dancing while he plays, using the staccato clack of his feet as a rhythm section, swinging his trumpet like a baton every now and then just for show. Depending on the day, he might stop after a few songs and take out a microphone and, armed with the backing tracks of some current Top 40 favorites, belt out a tune or two, all while dancing, grooving, jumping; it’s a rarity to catch him being still. Busy businessmen stop and stare and listen despite themselves. He winks at women and they get the giggles.

Gabriel Angelo is the ultimate entertainer, and he is 14 years old. Known as “the Trumpet Kid,” Angelo, an Oakland native, been playing trumpet and dancing since he was six, at a level that earned him an appearance on the Ellen Degeneres show in 2012, among other publicity, as well as the adoration of one of the toughest audiences in the city: harried FiDi pedestrians.

In honor of our “streets” issue, on a recent Thursday afternoon, I caught up with Angelo when he was playing on the traffic island outside the Ferry Building, serenading appreciative tourists and farmer’s market-goers. His voice has changed. There’s a whiff of cologne about him. Look out, San Francisco, the Trumpet Kid is growin’ up.

San Francisco Bay Guardian How did you get your start in music?

Gabriel Angelo My mom sent me to take piano lessons when I was six years old, but when I set foot in the music room, a few feet away from me there was this shiny brass trumpet. And I reached out and grabbed it and it was love at first sight.

Since I was really young, I always wanted to be an entertainer — my family watched a lot of old movies, like with Fred Astaire, and they inspired me a lot. My two older sisters were also very musical — they sang, danced, played the cello, piano, and violin. Our church was very heavy on the arts.

SFBG How often are you out here? Are you in school?

GA I’m out here most Thursdays, Fridays, Saturdays and Sundays, more if my schedule allows it. I try to get at least four hours of practice a day, usually more like six or eight. I’ve been home-schooled my whole life, and I actually already completed high school. Now I’m working on degrees in music and business through a program called CollegePlus.

SFBG What do you think you’ve gained from performing on the street from such a young age opposed to going the academic route with studying music?

GA This is my stage. There are so many people here, and I get to practice my stage and speaking skills, make connections, meet awesome people. I’ve learned a lot by talking to the homeless people in San Francisco, especially — they tell me their stories and experiences and that’s given me a whole new understanding. And I like feeling like I can help people with music. I’ve had people come up to me and say ‘Oh, I just had a person close to me die, and you put a smile on my face.’ With singing, my goal is just to inspire people. And also to make women feel beautiful.

GA Yeah, because a lot of people don’t have fathers to tell them that, parents who make them feel good, and that one little thing affects their whole life. I know I wouldn’t have achieved anything without my mother’s support, without mentors in my life. And life comes from women.

SFBG Amen. Are you tight with other street musicians downtown? Are there turf wars?

GA No, we all have a lot of respect for each other. It’s whoever gets there first. But if someone ever really wanted me to move, that wouldn’t be [a big deal].

SFBG How much do you make on a given day?

GA It really depends. Anywhere from a penny to $100. It’s all going to help fund my career: paying for costumes, music videos, etc.

SFBG Any big projects coming up?

GA Well, I’m excited that I just signed with Journey’s manager. And I’m going to be playing the 2015 Super Bowl halftime show in Arizona. And I met someone who wants to make a movie about me, called “Swaggy.” (I’m Swaggy.) So yeah, it should be a fun year.