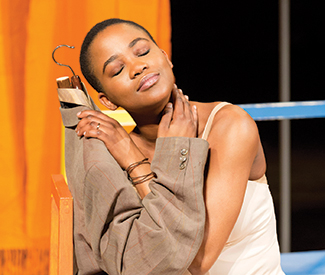 THEATER In the 1940s and ’50s, Sophiatown was a poor and rough but exceptionally vibrant black suburb of Johannesburg. Its destruction under apartheid, which entailed the forced removal of residents in 1955, remains a painful emblem of South Africa’s racist system. It also forms the suggestive backdrop to a small domestic tale of infidelity in Théâtre des Bouffes du Nord’s touring production of The Suit — directed and co-adapted from the famous Can Themba short story by legendary maestro Peter Brook, and now making its Bay Area debut at American Conservatory Theater — which turns the personal lives of its protagonists into an existential rumination and a subtle but resonant political allegory.

But in Brook’s hands — and those of his principal collaborators, translator and co-adaptor Marie-Hélène Estienne and composer Franck Krawczyk, working with the stage adaptation by Mothobi Mutloatse and Barney Simon — the story and its themes are inseparable from a pure theatrical experience. With a few choice properties, a fine trio of actors, a smattering of evocative songs, and three protean musicians (who add a rich soundscape to the proceedings as well as good-naturedly people scenes when necessary), The Suit unfolds as a deceptively simple, wistful, and whimsical communion with its audience, a shared space for dreaming the world as it really is and as it might be.

To this end, the stage comes dressed with little more than a handful of brightly colored wooden chairs and a couple of empty rolling coat racks, the latter serving variously as closet, wall, entry way, or bus shelter. Each of the three actors helps to narrate the story, which centers on Philomen (played by the impressive Ugandan-born London-based actor Ivanno Jeremiah) and his beautiful young wife, Matilda (radiant South African actor and singer Nonhlanhla Kheswa).

Philomen, deeply in love with Matilda, is devastated when, en route to work one day, he learns from his friend that she may be having an affair. He heads home instead and discovers her in bed with a young man who promptly runs out of the house, leaving behind his suit. He decides the suit will be the basis of Matilda’s punishment. She will have to care for it as an honored guest in their house, to the point of feeding it meals and taking it along for the couple’s strolls around the neighborhood. This humiliation takes a heavy toll on Matilda, but she is powerless to change Philomen’s mind on the matter. For his part, he acknowledges that he has lost his former self, that some “mechanism” that was his life has broken down and now functions perversely. It is finally his best friend who, in a quietly poignant moment of contact, convinces him to forgive and forget, but by then it is too late.

The domestic world and its promise of bliss are thus distorted and starved, and come to resemble instead something more like a cage, while mirroring a larger system of oppression outside — especially as news comes of the forced relocation of Sophiatown’s residents and the resistance movement it sparks.

But in its deft, joyful staging and gorgeous musicality, the production never lets go of the sense of what is being denied, namely a profound harmony and a depth of feeling, making their loss in the story all the more affecting. Moreover, the music itself (mingling traditional African songs with one by Nina Simone, as well as a raw and stirring rendition of Abel Meeropol’s “Strange Fruit”) reveals a consonance with histories, legacies, and unsung stories much closer to home. *