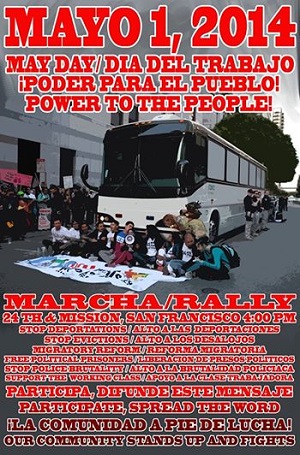 Happy May Day, comrades, and what a fine May day it is even if the urgent mayday spirit on this International Workers Day doesn’t seem as strong as some recent years past in the Bay Area.

While Russia seems to be rediscovering its previous practice of massive May Day marches marked by anti-Western propaganda, spurred on by renewed nationalism from the standoff in Ukraine, May Day has never been very big in the US.

The holiday celebrated throughout the world with workers showing their strength and demanding their fair share of our collective wealth marks the anniversary of a labor demonstration that turned violent and triggered a harsh crackdown in Chicago in 1886. While the socialists of the Second International adopted the May Day holiday in 1889, the American holiday of Labor Day was adopted as a bland alternative meant to take the radical edge off of workers movements.

But many leftists in the US retained an affinity for May Day, and it was infused with a renewed spirit and radical energy by supporters of immigration reform and an end to deportations that divide up families, with massive marches in major US cities in 2006 catching the media and political establishment off-guard.

Then, two years ago, fresh off of the Occupy Wall Street (and Occupy San Francisco, Occupy Oakland, etc.), some young anarchists rampaged through the Mission District, breaking windows, spray painting luxury cars, attacking a police station, and generally targeting what they saw as the forces of wealth and gentrification, albeit in a misguided and widely condemned way.

Today’s big May Day march in San Francisco starts at the 24th Street BART Plaza, again strongly emphasizing the need for immigration reform, but also marrying that cause with the anti-displacement and anti-eviction activism that are roiling San Francisco these days. [The poster for the event even features a photo of a recent Google bus blockade CORRECTION: The photo is actually of immigration activists blocking a deportation bus.]

Meanwhile, in the East Bay, the main May Day march begins at 3:30pm at the Fruitvale BART Street, also with a focus on social justice and immigration reform. So get on out there, comrades, you have nothing to lose but your chains.