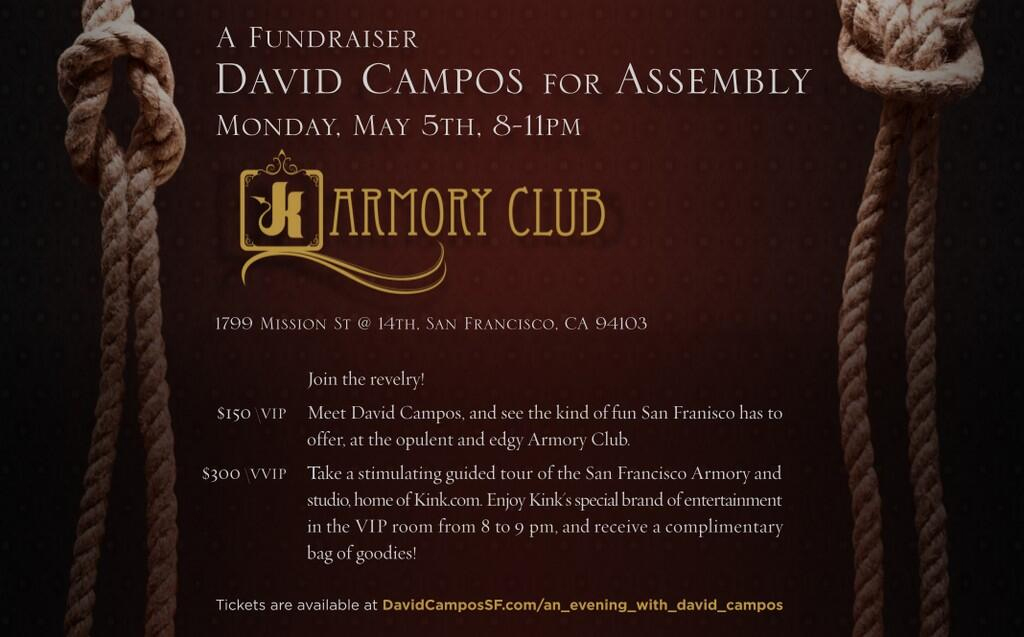 Looks like the heat in the Assembly race is about to turn up a notch, but not in the way you’d expect.

The porn-purveyors known for ball-and-gag videos, submission wrestling and sex robots, is located within the boundaries of Campos’ supervisoral district 9.

But Kink.com’s reputation for delightful perversion begs a question: Just how kinky will the Kink.com political fundraiser get?

We went straight to CEO Peter Acworth for the answer, and it’s a bit hotter than we expected. An exotic dancer will be gyrating away in the Armory Club’s VIP area, Acworth confirmed for the Guardian. They dancer will be scantily clad, he noted, but won’t be nude.

The $300 VIP tickets will also grant a “stimulating private tour” of the historic Armory building and cocktails.

Acworth said he’s backing Campos because he’s a politician who “isn’t afraid of a little kink.”

“He is one of the rare politicians who has ever reached out to me,” Acworth said, “and is unafraid of the association.”

Having a friend in the Assembly may be one way to put the breaks on the condom requirement legislation.

“I believe he is more likely to listen and seek to understand our issues,” Acworth said. Beyond condom use though, the CEO said he believed Campos’ would be a staunch advocate for the LGBT community.

We contacted Campos to see if he’d combat the condom ban if elected, but didn’t hear back from him before publishing.

Campos isn’t the only Assembly candidate to have a good time on the campaign trail. To give credit where credit is due, candidate and Board of Supervisors President David Chiu had his own fun fundraiser (and birthday party) recently, hosting a roller disco.