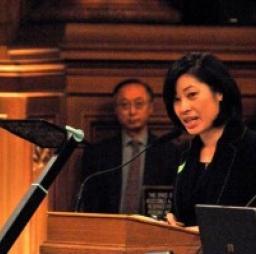 Police Commissioner Angela Chan fought the federal government as they unjustly tried to deport undocumented San Franciscans who were guilty of no crimes, and won.

She fought to arm the SFPD with de-escalation tactics instead of Tasers, and won again.

But at today’s Board of Supervisors meeting, Chan lost.The board denied her reappointment to the Police Commission, and seven supervisors voted to appoint her opponent, Victor Hwang, instead.

“I can see the writing on the wall and the way the votes are coming down,” Supervisor Eric Mar said to the board just before the vote. “It’s a sad day for the immigrant rights movement when a strong leader cannot be reappointed. Its a a sad day when a woman standing up for immigrant justice is not reappointed.”

The decision came after heated backdoor politicking by Chinatown political leader Rose Pak, insiders told us. Politicians involved would only speak on background, for fear of reprisal from Pak, but openly told the Guardian that Pak felt Chan spent too much time advocating for other communities of color, instead of just focusing on issues affecting Chinatown.

Chan gained national recognition for her work against Secure Communities, or S-Comm, a program that allows U.S. Immigration and Customs Enforcement to hold undocumented persons they’d later like to deport, often indefinitely.

Pak came out swinging against Chan in the wake of those battles, we were told, because they diverted from efforts relating to Chinatown. Public records requests also show that Pak’s allies operated against Chan, demonstrating Pak’s influence.

A series of public records requests from the Guardian confirmed that Malcolm Yeung, a well-known “hatchet man” for Pak, emailed the Board of Supervisors with scores of support letters for Chan’s opponent, Hwang. One of those support letters came from noted Reverend Norman Fong, a powerful voice in the Chinatown community and the executive director of the Chinatown Community Development Center.

For a full recap of the nasty politics that came out to slam Chan, check out our post from earlier today.

Sup. Katy Tang introduced the motion to strike Chan’s name from the appointment, and replace it with Hwang’s.

“We are lucky when we have such strong candidates,” Tang said. “However it is because of Victor’s sense of criminal justice and civil rights experience that we bring to a full vote to put Victor to the Police Commission.”

But other supervisors noted the obvious elephant in the room — there was not only one vacant seat on the police commission, but two. One appointed by the supervisors, the other appointed by Mayor Ed Lee.

Supervisor John Avalos suggested the Board of Supervisors make a motion to request the mayor appoint Hwang himself, allowing for both Chan and Hwang to be appointed, a compromise move that would benefit everyone.

“[Mayor Ed Lee] could appoint Victor to the committee,” Avalos said to the board. “There’s room for both of them to be on the commission.”

But Board of Supervisors President David Chiu said he asked Mayor Lee that very question, and that he was denied.

“It’s something I asked,” he said. “It is not something that will happen.” He went on to note that both candidates were very well-qualified, but did not explain why he would support one over the other, saying: “It is not the practice of the mayor to solve difficult decisions of the board. It’s up to us.”

Then Chiu said he would vote for Hwang, a surprising move. Chiu is running for state assembly on the notion that he is the compromise candidate, yet was unable to broker a compromise that was clearly in front of him: there were two vacant police commission seats, and two candidates.

Chiu’s support for Hwang was especially surprising considering Rose Pak is oft-described as Chiu’s political enemy. One must wonder what political favors he gained for his support of Hwang.

Kim repeatedly referenced her friendship with Hwang in the discussion leading up to the vote.

In the end, Supervisors Mark Farrell, Scott Wiener, Malia Cohen, London Breed, Jane Kim, Tang and Chiu voted to strike Angela Chan’s name from the appointment, and to vote to appoint Hwang instead.

“I had a good four years on the commission,” Chan told the Guardian in a phone interview afterwards. “I was able to accomplish a lot, along with the many people who came out today to support me. People from the mental health, African American, Asian American and Latino communities. Hopefully with this experience they will become more organized and powerful as a community.”

After Victor Hwang’s victory, the Guardian stopped him outside of the board chambers to ask him: If Rose Pak helped you get your seat, are you beholden to Rose Pak?

“The simple answer is no,” he told the Guardian. “She’ll have no more sway than anyone else. She’s a leader in the community, and there are many leaders in the community. I’ll make independent decisions for myself.”

His first priorities as a Police Commissioner, he said, would be what he called “the little things” — pedestrian safety by the Broadway tunnel, graffiti enforcement, and making sure calls for matters like break-ins are enforced in a timely manner.

Hwang doesn’t want to start new projects right away, he said, because there are already big issues with the SFPD on the table. He said the Alejandro Nieto shooting would be a focus moving forward.

In our last story covering the shady politics behind Hwang’s appointment, we likened the political machines supporting him to the Game of Thrones House Lannister (the purported villains of the show). Hwang wanted to set the record straight.

“I think Ivy [his partner and Sup. Kim’s legislative aide] took one of those personality tests for me,” he said, “it came back as Jon Snow.”

Jon Snow is the closest thing Game of Thrones has to a hero.

Image below: A Guardian file photo of Victor Hwang, newly appointed by the Board of Supervisors to the Police Commission.