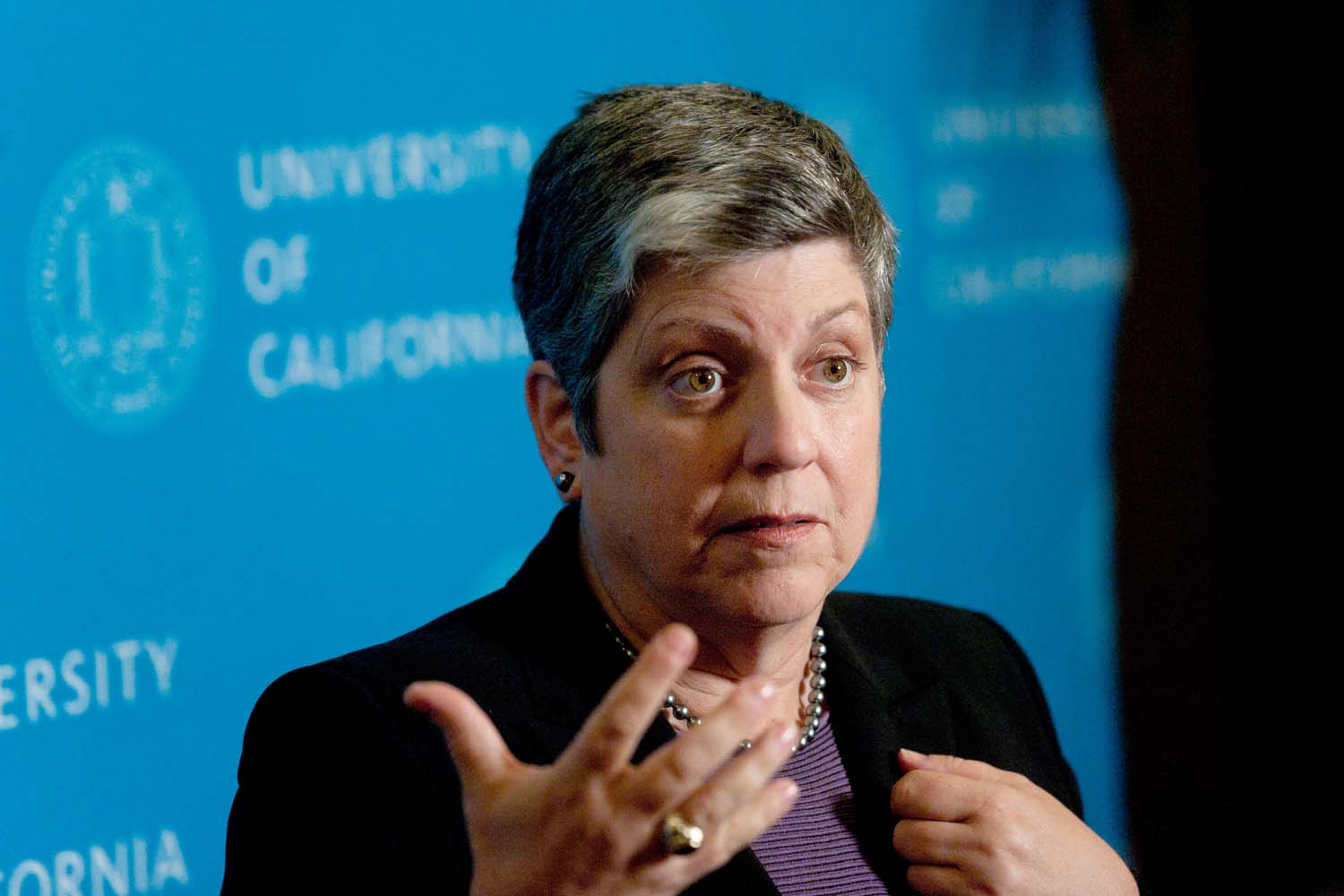 Current and past UC Hastings students launched a petition protesting an upcoming graduation commencement speech from Napolitano, who oversaw what some say are record deportations in the United States.

The Change.Org petition against the speech minces no words in denouncing her role in seperating families from their homes, and from each other.

“As Secretary for the Department of Homeland Security (DHS), Ms. Napolitano spearheaded inhumane policies, including wide implementation of so-called ‘Secure Communities,’ a deportation program notorious for its conflation of the criminal and immigration systems,” the petition states. “Her actions have caused profound tragedy to members of the Class of 2014, their families, and members of the Hastings community at large.”

Napolitano was hired on as president of the University of California system last year, sparking protests from undocumented student rights groups up and down the state, which we’ve covered previously [“Undocumented and Unafraid“, 11/13]. Two student groups, Hastings Students for Immigrants’ Rights and Hastings La Raza Law Association, initially voiced concern over the choice of Napolitano as commencement speaker. When their outcry fell on the school adminstration’s deaf ears, the students reached out to Hastings alumni for help.

“I was immediately concerned,” Noemi Gallardo, a 2012 Hastings alum told the Guardian. “Students are investing a lot of money in their schooling, and graduation is a celebrant time,” she said, except now families who are immigrants, or children of immigrants, will have their commencement given by one of the most controversial figures in their community.

Gallardo and a group of alumni launched the petition and an open letter to Chancellor and Dean Frank H. Wu, which was signed by 15 Hastings student organizations, including the Hastings chapter of the National Lawyers Guild. The petition garnered more than 300 individual supporters in its first few days.

Napolitano speaking to these students makes about as much sense as asking asking Mitt Romney to give a speech to Occupy Wall Streeters. Maybe that’s why Gallardo’s inbox was overflowing with students asking for help in stopping Napolitano from giving the speech.

“I’ve received phone calls, emails, Facebook messages,” Gallardo said. She and a group of fellow Hastings alum sat down for a meeting on Napolitano with Frank H. Wu, chancellor and dean of UC Hastings.

Gallardo and alum hoped Wu would back down on the decision, but instead he’s doubled down. Wu issued a statement to students and posted it publicly on the UC Hastings website.

“I would like to acknowledge those from the UC Hastings community who have raised this issue—some of whom have had loved ones deported,” Wu wrote. “As the child of immigrants myself, I have experienced the effects of restrictive policies for determining who may become a citizen….as Chancellor and Dean of this law school, I want to be unequivocal: I am proud that we have trained advocates for a cause who wish to stand up and speak out. We will do our utmost to protect the free speech rights of those who wish to share their opinions, while ensuring that the dignity of the Commencement ceremony is maintained.”

But caveats aside, Wu ended the letter by reasserting his commitment to Napolitano as commencement speaker. “We do not shy away from the controversy that is integral to the progress of the law,” he wrote. “In this spirit, I look forward to welcoming University of California President Janet Napolitano to the stage for Commencement on May 10.”

For Gallardo, denouncing Napolitano as commencement speaker is not just political, it’s personal.

She’s a first generation American, and her parents are both from Mexico. “We lived very humbly,” she said. She’s worked in the immigrant community for close to a decade, from legal work to translations. She now runs a policy consulting group that works closely with nonprofits, adressing language access, legislation and education issues affecting minority communities.

Students, alumni and their supporters also spoke out against Napolitano’s speech via Twitter using the commencement hashtag #UCHastings2014

Ashamed and disappointed in Hastings’ choice of Napolitano as this year’s commencement speaker! #UCHastings2014

@uchastingslaw I already have zero hastings pride. Let’s not get into negative territory. #UCHastings2014 http://t.co/ALSJqHxZsX

Was hoping for a chance to be proud & joyful with my community. We get a twisted object lesson in “academic freedom” instead #uchastings2014