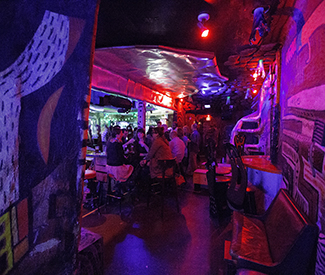 I used to hang out at the Noc Noc (557 Haight Street, SF. 415-861-5811) for too many hours in a row just so I could make out with the bartender after she got off work. She’d feed me bottles of powerful sake and I’d sit around bullshitting with the half dozen or so other dudes who’d come by with hopes of getting in her pants.

I’d convinced myself I wasn’t one of them, since it was me that she made out with after her shift, but more often than not she’d get off and we’d cross Haight Streeet to Molotov’s so I could watch her play pool with all the dudes who hung around fawning over her at the bar. I’m not a competitive person and even more so, hate being forced into vying for someone’s attention, so I got tired of the scene fairly quickly and stopped doing it. Still, she was a really good kisser.

I spent a lot of time at the Noc Noc in my youth though. Many years ago I dated a USF girl who was under 21 and we’d go there because she and her friends could get in. They never carded back in those days (don’t worry ABC, they do now) and we’d sit on the Beetlejuice looking chairs, amongst the psychedelic cave paintings and the black lights, drinking sake and beer. I’d tell those naïve USF kids wild stories about what it was like to be over 21 even though I was just barely so, but it was good enough to impress them and my girlfriend and I would make out and be in love up and down Haight Street. Other people would see us and feel sick or jealous or both. She was also a really good kisser.

The name Noc Noc derives from Nocturnal Nocturne. When Ernest Takai opened the Lower Haight joint in 1986 it was the “first place to play industrial, ambient, dance, acid jazz in San Francisco” or so the website tells me. I didn’t know any of this stuff until right now when I went to the Noc Noc’s website. Anytime I’d ever asked anyone at the bar why the place looked so fucking perfectly unusual I got a bunch of drunk stories that basically amounted to “some crazy ass Japanese dude opened the place and I think he was an artist and liked music or something,” which was good enough for me.

Vagueness makes a bar story good and allows room for mystery, which is something the world is sorely lacking these days. When you can answer any question that’s ever been asked, simply by Googling it, mystery becomes the first casualty of too much information.

One of my favorite Joni Mitchell lines is, “Everything comes and goes, marked by lovers and styles of clothes.” And like always, Joni is right. We keep track of who we were back when, by remembering the people we dated and the silly shit we wore. But the same goes for the places we hung out in. The Noc Noc opened in 1986 and its dark corners and dark beats have been a cornerstone for kissing San Franciscans ever since. Making out with someone is one of the last bits of mystery left in the world. You have no idea where that path will lead but the initial excitement it makes you feel is worth all the Googleable knowledge in the world. Google is a lot of things, but it will never be a really good kisser.