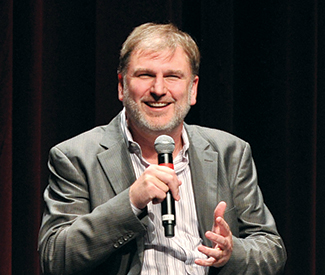 Cowan is very freshly transplanted from his native Toronto, where he worked for years in various roles at the Toronto International Film Festival; his career highlights also include co-founding Cowboy Pictures and the Global Film Initiative. He’s so new in town that his 12-year-old greyhound, Ruckus, has yet to make the move (“He’s gonna come down in the fall, because it’s been so busy, and I’m traveling a lot this summer”); he’s barely had time to find an apartment (home is now the Inner Sunset) and get his bearings.

But the San Francisco International Film Festival, now in its 57th year, waits for no man — not even this man, SFFS’ fourth executive director after the deaths of Graham Leggat in 2011 and Bingham Ray in 2012, and the brief tenure of Ted Hope, who began a new job at Fandor earlier this year. As the fest ramps up to its opening this week, the energetic Cowan — a huge San Francisco fan — gives the impression of someone who plans on going the distance.

SF Bay Guardian So, you started in early March, and the festival begins April 24. You’re plunging right into it!

Noah Cowan Yeah! But I think it’s better that way, because I’m experiencing the key event of the organization. I was able to help out at the very last minute on a few of the bigger films, but [starting right before SFIFF] allowed me to see the tail end of the programming process, and start thinking about ways we want to move things in the future.

SFBG How does this job differ from what you were doing previously?

NC My role in Toronto was really as an artistic leader, as opposed to an executive leader. Obviously there’s artistic-leadership aspects of my current job, but I have the benefit here of three really capable artistic heads: [director of programming] Rachel Rosen, who runs the festival and our other film screening programs; [Filmmaker360 director] Michelle Turnure-Salleo, who runs the filmmaker services and filmmaking area; and Joanne Parsont, who is a gifted director of education. I’m more strategic guidance and day-to-day administration, really learning how to run and expand and change the business.

In my career, I’ve gone back and forth between these two tendencies. I really feel now that I want to be back in the executive director’s seat. I was co-president of my own business for almost 10 years, and I’ve really missed that — the ability to mentor staff and to shape the overall tone of an institution. San Francisco provides unusually interesting opportunities for making a new kind of institution. It’s just a place that loves invention, and the people, including our board, have a real can-do attitude about change. For me, it’s a dream come true! I just need to get through the festival [laughs] to get a breath.

There are certain holdovers from my role in Toronto, where we built a crazy big building, [the TIFF Bell Lightbox, which opened in 2010]. There’s nothing else like it in the world of film, and I had the great honor and privilege of being able to oversee the artistic life of that building. Maybe some things that we did there aren’t going to translate here, but some of them will. We engaged in a lot of pilots in education and film-community outreach that taught me some valuable lessons about how those can and can’t work, and what’s changed about education now that we’re in the digital world.

In addition, I’ve learned the pros and cons of having your own theater space. While I’m highly optimistic that we’ll have alliances in the future where we’ll be able to have a year-round screening presence, I’m going to be pretty cautious about how we go about that from a business perspective.

SFBG SFFS already has several special presentations and mini-festivals throughout the year (Taiwan Film Days, French Cinema Now, etc.) When you say “year-round,” do you mean an increase in programming? Weekly screenings?

NC What would exactly happen in that theater is still a question. Maybe it’s just these small festivals that we have. I think there’s something about being associated with a permanent space, even if you don’t own it, that is really important for a film institution — to really be anchored. Film is kind of a retail business in a funny way, and while festivals are the Black Friday of film going, you need to have a sustainable relationship with your audience to be able to grow it, and to have them trust you to follow different pathways.

SFBG Fortunately, like Toronto, San Francisco has a built-in audience of film fanatics.

NC It’s interesting here — it’s more diffuse environment. While there are a lot of film festivals in Toronto, there are a million in San Francisco and in the Bay Area in general, and there’s positives and negatives about that. When I have a second, after our festival, I’m looking forward to reaching out and understanding the needs of other film organizations in the city, and how we might be able to help. So far, this has felt like a city that really welcomes collaboration, so I hope we’ll be able to have some really exciting conversations.

SFBG What are you most excited about at this year’s SFIFF?

NC I really like this festival. There are a number of terrific films. I really like Rachel Rosen’s taste! Very much like the Toronto festival, the San Francisco festival is really focused on audiences: what kind of audiences are going to be interested in what kinds of films, and in general, an eye to audience enjoyment in the selections, even for films that are on the difficult side. There’s a thoughtfulness to the kinds of responses that the programmers would like to elicit, which really fits in with my own philosophies of why film festivals and film organizations are generally on the planet.

In terms of individual films, there are some films that I’ve championed before that are here, like Roberto Minervini’s Stop the Pounding Heart, or James Franco’s Child of God, which I was the programmer of this past year in Toronto. I’m happy to see them again! And then there’s some new work, particularly in the documentary area, that really impresses me — films like Art and Craft and Burt’s Buzz, which are really strong and really accessible.

And then, of the many elements that drew me to San Francisco, probably the biggest one was the incredible work that we’re doing in making films. So I’ll be paying very special attention to the San Francisco Film Society-supported films — we have seven films that we’ve supported, strictly church and state in terms of being selected for the festival, that are going to be here because they’re just the best films of the year, particularly from an American independent perspective. I’m just so delighted that we can have these deep, family associations with films like Hellion, Little Accidents, and Manos Sucias. These are all films of really high caliber that are going to be among the most talked-about films of the year. *