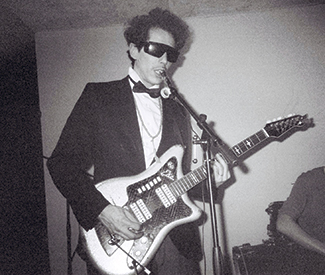 MUSIC Like some bastard love child of Link Wray and Johnny Thunders, Berlin-by-way-of-Israel rock ‘n’ roller Charlie Megira has mastered the art of blending 1950s-style rock guitar and spooky, blood-curdling howls. In his newest incarnation (though not as new as it may seem, but we’ll get to that later), the Bet She’an Valley Hillbillies, he takes those building blocks and adds a vroom-vroom rockabilly twang.

It’s a sound he describes in a typically poetic — and esoteric — word dump: “The beginning of the end of music…dealing with the local in an exotic manner. It don’t mean a thang if it ain’t got that twang…Rings of Fire that burn like love.” Got it.

Bigger news: After a long battle to obtain the proper visa, Megira will head to the United States for his first ever stateside tour, beginning Mon/28 at Vacation SF, then Tue/29 at the Nightlight in Oakland. In a travel loop, he’ll stop by the Austin Psych Festival in Texas and head back to the Bay for a pop in at the Makeout Room on May 14. During the tour, Megira and the Bet She’an Valley Hillbillies will be selling a cassette called The End of Teenage (Guitars and Bongos), a mix of original rockabilly and surf.

That Bet She’an Valley Hillbillies name is a nod to his childhood. He was born and raised in the northern Bet She’an region of Israel, obsessed with Algerian and Moroccan music like Salim Halali and Joe Amar. There was also the excellent record collection of his father, who once upon a time was a musician as well. “They told me that my father used to have a trumpet when he was a kid. I guess he didn’t stick with it,” says Megira. “But he used to play a number on family occasions like weddings. It was great.” Through his father’s vinyl stash, Megira absorbed the likes of Elvis, James Brown, Santana, and 1960s Israeli folk-pop star Esther Ofarim.

“I used to ask him while watching the [White Snake] videos, ‘why are they wearing ripped clothes and torn jeans?’ I thought that they were poor or something,” he says.

He began a succession of his own bands, including perhaps the most well known, at least in Israel: The Modern Dance Club. Before MDC there was the Schneck, Naarey Hahefker, Oley Hagardom, Los Tigres, The Wall of Death, No Hay Banda, The Tralalala Boys; the list goes on.

I first caught on to the Modern Dance Club through its cheeky, perfectly ’60s-aping beach-blanket-bingo encapsulated video for “Dynamite Rock,” off second full-length Rock-n-Roll Fragments. (It was originally released in 2002 and rereleased on Birdman Records in 2009.) The song sounds like a fuzzier, Israeli “Teenager in Love.” It was hard to believe Megira was a modern-day musician, as the Modern Dance Club name hinted at and a quick Google search confirmed. He looked and sounded of another era, a toothy, pompadoured rocker with western motif style and hip-shaking guitar lines. Rock-n-Roll Fragments also contains a song called “Bet She’an Valley Hillbillies,” which informed his next act.

“I read about [Megira] in an Israeli newspaper and heard him on Israeli radio,” says Guitars and Bongos co-founder Eran Yarkon, who lived in Israel for a year before moving to Oakland. “I never thought I would have a label. But of course I was a big fan, and so is my friend Julie Cohen, so we thought of ways to put out Charlie’s music in the US on vinyl. Julie came out with the name of the label, which is based on a Lou Christie song.”

Others might have found Megira through Israeli filmmaker Ari Folman’s follow-up to his wildly popular (and Oscar-nominated) film Waltz with Bashir (2008). The film, sci-fi epic The Congress (2013), included music by Megira and also an animated version of the rocker. “It was great seeing my cartoon character alongside Elvis and Yoko Ono.”

Folman had heard Love Police and tracked Megira down to be in his film. In it, Megira’s cartoon performs his own original song — haunting, slow-burning “Tomorrow’s Gone,” off an early release — and also plays guitar on covers of Bob Dylan’s “Forever Young” and Leonard Cohen’s “If It Be Your Will,” sung by actress Robin Wright in the film.

Appearing in Folman’s film was a coup, no doubt, but the move from Israel to Berlin with his wife and young son a few years back was an even bigger milestone, an epic journey north leading to a prime creativity peak. “It all felt a bit like The Flight Into Egypt theme you find in Gothic paintings. Germany is now our Egypt.”

In Berlin, he revived a sound he first visited in his Rock-n-Roll Fragments days and formed a band by the same name as that aforementioned track: Bet She’an Valley Hillbillies, with a bassist who goes by the Dead Girl (also a member of the Modern Dance Club) and bongo player named Corso, whom Megira met while doing integration classes at a college in Berlin.

For the Bet She’an Valley Hillbillies US tour, however, Michael Beach (Electric Jellyfish, Michael Beach, Shovels) and Alexa Pantalone (Pang, Penny Machine) will back Megira. No matter, he’s long been the songwriter and main driving force behind his bands, fronting with cool abandonment and a sweltering connection to vintage rockers of yore.

Like his sonic ancestors, moody rockers with greasy pomps and snarling attitude, he seems to be on the rebellious, rock ‘n’ roll trip — roaring with fuzzed-out ’50s riffs that still pummel like Link Wray, growling like Johnny Thunders — yet bound to family, home life, and even self-improvement.

However serious, Megira claims, “I want to finally learn how to sing and dance like a serious entertainer and to communicate with people like a normal person. Maybe I should take some courses or something.” But then he’d be a so-called normal person, and what fun is that?