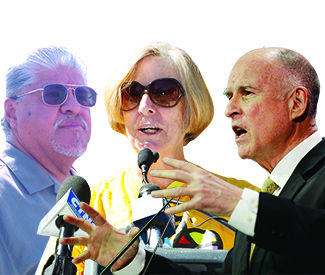 It’s never been easy for progressives to mount a serious campaign for the California governor’s office. The high water mark was in 1934 when famous author/activist Upton Sinclair ran on his End Poverty In California platform and got nearly 38 percent of the vote despite being shut out by the major newspapers at the time.

That campaign was cited by both of this year’s leading leftist challengers to Gov. Jerry Brown — Green Party candidate Luis Rodriguez and Peace and Freedom Party candidate Cindy Sheehan — who say the goal of ending poverty is more important than ever, but who are also having a hard time getting media coverage for that message.

The latest Field Poll from April 9 shows Brown with a 40-point lead on his closest challenger, conservative Republican Tim Donnelly (57 to 17 percent, with 20 percent undecided). Republicans Andrew Blount and Neel Kashkari were at 3 and 2 percent, respectively, while Rodriguez and Sheehan are among the 11 also-rans who shared the support of 1 percent of the California electorate.

Perhaps that’s to be expected given that Brown is a Democrat who pulled the state back from the edge of the fiscal abyss largely by backing the Prop. 30 tax package in 2012, with most of the new revenue coming from increased income taxes on the rich. But to hear Rodriguez and Sheehan tell it, Brown is just another agent of the status quo at a time when the growing gap between rich and poor is the state’s most pressing problem.

“We have to put all our resources into ending poverty,” Rodriguez told us.

The campaigns that Rodriguez and Sheehan are running seem indicative of the state of progressive politics in California these days, with good work being done on individual issues by an array of groups, but little coordination among them or serious work on the kind of organizing and coalition-building needed to win statewide office.

There is still hope, particularly given California’s open primary system, where all Rodriguez or Sheehan need to do is beat the top Republican challenger in June in order to face Brown in a two-person race in November — an outcome that would definitely elevate their progressive message.

“One of our sayings is ‘second place wins the race,'” Sheehan told the Guardian.

But at this point, that seems unlikely, a longshot that points to the need for progressive-minded Californians to rebuild the movement and win over new generations of voters, particularly the young people disconnected from electoral politics and largely behind by the economic system.

When we asked Sheehan how her campaign was going, she replied, “It’s going.” When we pushed for a bit more, she told us, “It’s very, very grassroots and we’ve been trying to get the word out.”

And by “very, very grassroots,” Sheehan seems to mean that it’s not going very well, in terms of fundraising, volunteer support, media exposure, or any of the things a campaign needs to be successful. It’s been a disappointment for a woman who started her public political life as a media darling.

The year after Sheehan’s son Casey died fighting the Iraq War in 2004, she set up an encampment outside then-President George W. Bush’s ranch in Crawford, Texas, instantly becoming a high-profile anti-war activist just as public opinion was turning strongly against the war.

Sheehan parlayed that fame into international activism for peace and other progressive causes, writing a pair of autobiographical/political books, and mounting a primary challenge against then-Speaker of the House Nancy Pelosi in 2008, finishing in second place with about 16 percent of the vote. Sheehan was also the running mate of presidential candidate Roseanne Barr in 2012, although their Peace and Freedom Party ticket didn’t appear on the ballot in most states.

But these days, Sheehan has found it tougher to recapture the media spotlight she once enjoyed, causing her to sometimes bristle with frustration and a sense of entitlement, as she did with us at the Guardian for failing to help her amplify her message before now.

“Who came in 2nd against Pelosi? Who received well into ‘double digits?’ The campaign can’t get steam if ‘lefties’ put the same criteria as the [San Francisco] Chronicle for example for coverage. If I were truly in this for my ‘ego’ I would have quit a long time ago. You write, I campaign all over the world for the things I care about,” Sheehan wrote in a testy April 3 email exchange with me after a supporter seeking our coverage sent her a message in which I questioned the prospects of her campaign.

But getting progressive support in a race against Pelosi in San Francisco clearly isn’t the same thing as having a progressive campaign gain traction with a statewide audience, particularly because Sheehan doesn’t have many prominent endorsers or organizational allies.

By contrast, Rodriguez seems to be outhustling Sheehan, racing up and the down the state to promote his candidacy and work on rebuilding the progressive movement, with an emphasis on reaching communities of color who feel estranged from politics.

“People like me and others on the left need to step up if we’re not going to just accept the control of the two-party system. We have to fight for that democratic reality, we have to make it real,” Rodriguez told us. “You can’t just say vote, vote, vote. You have to give them something to vote for.”

Rodriguez is the author of 15 books, including poetry, journalism, novels, and a controversial memoir on gang life, Always Running, winning major writing awards for his work. He lives in the Los Angeles area, where he’s been active in community-building in both the arts and political realms.

Rodriguez is running on a platform that brings together environmental, social justice, and anti-poverty issues, areas addressed separately by progressive groups who have made only halting progress on each, “which is why we need to make them inseparable.”

While he said Brown has improved the “terrible situation he inherited from Schwarzenegger,” Rodriguez said that the fortunes of the average Californian haven’t turned around.

“People are hurting in the state of California. I think Brown has to answer for that,” Rodriguez said, noting that people are frustrated with the economic system and looking for solutions. “I don’t think Gov. Brown has a plan for it. In fact, I think he’s making it worse.”

Sheehan is critical of Brown for his opposition to full marijuana legalization, his resistance to prison reform, for allowing fracking, and for doing little to challenge the consolidation of wealth.

“My main issue is always, of course, peace and justice. But a corollary of that is for the resources of this state to be more fairly distributed to help people’s lives,” Sheehan said, calling that economic justice stand an outgrowth of her anti-war activism. “Since my son was killed, I’ve been starting to connect the dots about the empire we live under.”

When she studied California history at UCLA, Sheehan said, “I was inspired by Upton Sinclair and his End Poverty In California campaign in the ’30s.” She reminisces about the California of her childhood, when college education was free and the social safety net was intact, keeping people from economic desperation.

“It’s been done before and we can do it again,” Sheehan said. “I love this state, I love its potential, and I miss the way it was when I was growing up.”

Money is a challenge for statewide candidates given the size of California, which has at least a half-dozen major media markets that all need to be tapped repeatedly to reach voters throughout the state.

“I won’t take any corporate dollars and only people with money get heard,” Rodriguez told us.

But he says California has a large and growing number of voters who don’t identify with either major party, as well as a huge number of Latino voters who have yet to really make their voices heard at election time.

“I’m really banking on the people that nobody is counting,” Rodriguez said. “This is the time when people need to come together. We have to unite on these central things.”

That’s always a tough task for third-party candidates. Sheehan has a paltry list of endorsers, owing partly to the left-leaning organizations like labor unions staying with Brown, even though Sheehan claims many of their members support her.

But Sheehan considers herself a strong and seasoned candidate. “I’ve run for Congress, I’ve run for vice president, and I think that politics should be local,” Sheehan told us, saying her main strength would be, “I would work with people to create a better state, not against people.”

It was a theme she returned to a few times in our conversation, her main selling point. “It’s about inspiring a movement,” Sheehan said. “My biggest gift is getting out there and talking to people.” But if her strengths are indeed inspiring a movement, working with allies, and building coalitions, then why isn’t her campaign doing those things? Sheehan admits that it’s been difficult, telling us, “I found it easier in San Francisco to get the word out.”