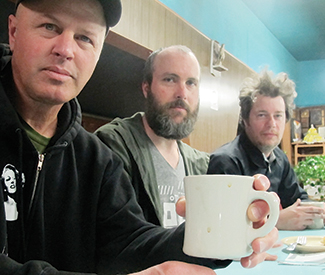 I was 12 years old in 1996, which is the year Jawbreaker, the punk band that’s been (somewhat controversially) called “the sound of the Mission,” disbanded for good. I started listening to them about four years later, and really only started listening-listening to them, in the way that Jawbreaker fans listen to Jawbreaker — obsessively, open-veined, with every part of your body engaged — a few years after that, when I was in college in San Diego, 500 miles from the ’90s Bay Area punk scene that I had only just begun to realize was special once it (and I) was all but gone.

I suspect, however, and a few friends’ Jawbreaker-love stories have confirmed this, that it doesn’t matter how old you are when you start listening to Jawbreaker, because Jawbreaker songs — in the universality of their lyrical angst, wedged as they are in that the puzzle-piece-shaped sweet spot between well-crafted pop and sore throat-inducing (in singer Blake Schwarzenbach’s case, throat polyp-causing) punk rock — will make you feel like a teenager. And not in the hopeful, peppy way people usually mean when they say something “made them feel like a teenager.” I mean, really, confused, hormonal, nostalgic, angry, in love, frustrated, drunk, fist-in-air triumphant, wistful about something you can’t quite place, and generally just fucking waterlogged with feeling.

The band’s enduring popularity and the reverence with which it’s still treated among the ’90s punk/emo-loving population — Google image-search “Jawbreaker tattoo” if you don’t believe me — is certainly, in large part, thanks to that: As an adult, that mood gets harder to access; you don’t often stumble onto art which opens a portal into that level of emotion. Jawbreaker picks you up and hurls you down it before you know what’s happening.

Drummer Adam Pfahler, the driving force behind the past few years of remastered re-issues of Jawbreaker’s iconic albums (on his own label, Blackball Records) has been plenty busy since that band met its demise. He opened Lost Weekend Video on Valencia, and still works there a few days a week. He lives in Bernal Heights; he has two teenage daughters. He’s played in at least a dozen other bands, including J Church and Whysall Lane. So does it bug him that people still mainly associate him with Jawbreaker, some 18 years after they broke up?

“Not at all — I’m totally grateful for that band, and the fact that people still feel that strongly about it is insane,” says the drummer, during a phone interview in which he multi-tasks impressively: He has about 20 minutes before it’s time to run to an evening practice with his new band, California, and he’s making pasta for his kids while answering questions.

“I’m definitely not running from that legacy. I love it, and so do Blake [Schwarzenbach] and Chris [Bauermeister, Jawbreaker’s bassist],” he says. “It is a little funny because I’ve been playing all along…it’s just that certain things take hold or get seen better than others.”

Of course, certain things, like this new project, have the benefit of being able to attach the words “Ex-Jawbreaker/Green Day” to a flier or listing, as the Rickshaw Stop has advertised California’s April 24 show — the band’s third official outing — though Pfahler’s a bit uncomfortable with using his star power that way. Hopefully, he says, the band will be earning that buzz on its own soon enough.

After all, California, a three-piece, is something of a Bay Area punk supergroup: On guitar and vocals you have Green Day‘s Jason White, who, despite having played lead guitar on the band’s tours for the past decade or so, only “officially” became a member in 2012; he also shares guitar and vocal duties with Billie Joe Armstrong in the long-running side project (and supergroup of its own, in a way) Pinhead Gunpowder. Bass and backup vocals are courtesy of Dustin Clark of The Insides; Pfahler is on drums.

“I’d kind of been starting to do stuff under my own name in 2011, just to try writing my own songs again,” says White, noting that Green Day is on an “indefinite break” — though he did just get off the phone with Armstrong, who called to tell him about how crazy it was to play with the Replacements at Coachella the previous night. (White, with a laugh: “I hadn’t wanted to go at all but now I’m super jealous, and bummed that I wasn’t there.”)

White started playing out acoustically about three years ago, at places like the Hotel Utah. When he was asked to play a friend’s 40th birthday party, he invited Clark to play bass; Clark asked Pfahler, whom he’d been playing with (they’re old friends — also SF experimental rockers Erase Errata, featuring Clark’s wife, Bianca Sparta, on drums, used to play in the basement of Lost Weekend). All three are veterans of the scene; all three were excited about trying something new.

“I’m at a place where I just want to try any and everything, stretch out on my own, experiment with some different ideas,” says White, who says he’s also a huge Jawbreaker fan. “And all three of us have pretty distinct individual tastes, which has made for a really nice mix of the three, I think.”

California at the Hemlock Tavern earlier this month. Photo by Greg Schneider.

There’s no music online for fans to listen to or buy just yet — and thanks to a name cribbed from a novella by Pfahler’s friend, the writer Amra Brooks, the band’s virtually un-Googlable — but a handful of demos they’ve recorded suggest a leaning toward the poppier end of the spectrum than you might expect from these three. White’s vocals are clean, earnest, not trying too hard to be too much, reminiscent of the Promise Ring, or of the days (day?) before “emo” became code for whiny and tossed around like a dirty word; tight, punchy, early Green Day-esque bridges and hooks are grounded, kept from being overly sugary by the heft of the rhythm section.

“This is very much a new band, in the garage band sense of the word — I’m happy to pester people with texts and emails to get them to come see our shows, because I’m really proud of this one,” says Pfahler. It’s an especially collaborative band, he says, which tend to be the kind he enjoys — as opposed to “just being the guy back there, being told to count to four.” They have plans to record in the next few months, but right now is the best part, says Pfahler: seeing what works and what doesn’t after hours of practicing, seeing how people react at live shows, when the songs are still malleable. “It’s a little like the early, fun part of a relationship,” is how White puts it. Pfahler: “If you’re fortunate enough to have the opportunity to play them out this early on in the process, once you record it’s almost like the death of those songs.”

Pfahler does feel fortunate, in a number of ways. As a longtime Mission District resident and business owner, he’s had a front-row seat for the neighborhood’s drastic changes over the past two decades. Is he tired of the conversation about gentrification?

“I am a little tired of it, but I’m no less passionate about how I feel,” he says. “It’s harsh. It limits things. We’re feeling that in the shop in a very real way, and certainly people are buying fewer records — but they’re paying for high cuisine, organic wine, you know. There’s no shortage of new bands screaming about this stuff, and they definitely have something to be mad about. It’s good fodder for angry music. When Jawbreaker settled here it was a pretty fertile time; you could get things going back then. I mean, the practice space I use now is shared between 13 people, and it costs more than my first apartment did. And there’s no bathroom! It would definitely be tough to be a kid trying to make music here.”

“At the same time, I think my kids are lucky to be here,” he says, as he beckons one of them to the stove to test the pasta. “Even with this craziness going on. They get around on public transportation, they go to shows. They’re going to be the backlash. They’re smart kids and they have really good bullshit detectors.

“That generation, I have a lot of hope for.”

Also: We’d be remiss to not mention the musical offerings the SFIFF has planned this year: Thao and the Get Down Stay Down and Stephen Merritt of the Magnetic Fields will each be performing live original scores during film festival offerings, on Tue/29 and Tue/6, respectively, at the Castro Theatre. Cross-media creative pollination never sounded so sweet. For tickets: http://tinyurl.com/l8srz9j