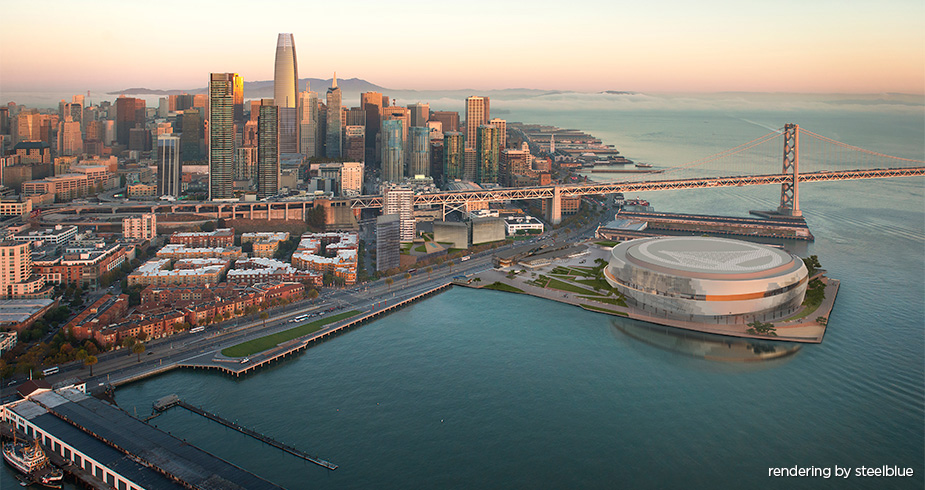 In another waterfront win, the Golden State Warriors have backed off their original arena site to another spot by the bay.

Multiple news outlets are reporting the proposed Warriors arena is moving from its contentious and hotly debated waterfront location at Piers 30-32 to what is now the home of Salesforce, in Mission Bay, a move praised by opponents of height-exceeding waterfront devleopment.

The story was first reported by Joe Eskenazi of the SF Weekly, and within the hour the Chronicle and San Francisco Business Times reported the move as well.

The Warriors’ original proposed arena site drew almost as much fire as the 8 Washington luxury condo waterfront project, which was overwhelmingly rejected by voters last November. Those against 8 Washington, and against the original Warriors site, argued that voters should have the right to weigh in on projects that exceed height limits on the waterfront.

Advocates against both waterfront projects praised the Warriors’ move.

“The Warriors have shifted to a smarter alternative because the people, not just the politicians, became involved in the process,” said former mayor Art Agnos, in a press statement. “Passing Prop. B is the next step to ensure that every other waterfront developer understands that the voice of the voters matters.”

Becky Evans, Sierra Club Bay Chapter Chair, evoked the imagery used to garner opposition to 8 Washington in her praise of the move. “We thank the Warriors,” she said, “for abandoning their wall on the waterfront.”

Yet the bid to protect the public’s views the bay doesn’t end at the Warriors’ arena.

Yes on B is a June ballot initiative which would require waterfront projects exceeding height limits to seek voter approval. And importantly, the Warriors’ arena is only one of three height-limit exceeding properties currently proposed for the waterfront. Two additional projects are a large housing and retail site proposed by the San Francisco Giants at Pier 48/Seawall Lot 337 and a mixed use office, residential, and retail project by Forest City at Pier 70.

The reasons behind the Warriors’ arena move are still as of yet unclear, and we were unable to reach Warriors spokespeople before press time. Sources close to the project however indicated the motivation behind the move is likely the obvious one: they didn’t want to deal with the headache of fighting the opposition.

Salesforce recently announced a move to the new Transbay Tower in 2017, potentially leaving their site in Mission Bay vacant. The Warriors’ arena move to the old Salesforce site represents a compromise it appears Mayor Ed Lee is happy to accept.

“I couldn’t be more thrilled to welcome the Golden State Warriors back home to San Francisco with a brand-new, privately-financed arena in Mission Bay,” Lee wrote in a statement earlier today. “The new Mission Bay arena will generate new jobs and millions of dollars in new tax revenue for our City.”

Jon Golinger, Campaign Co-Chair of No Wall on the Waterfront, viewed the news as a victory.

“When the public gets involved with deciding the future of our waterfront we get better results,” he wrote in a press statement. “Passing Prop B is the only way to be sure that other crazy Port Commission schemes like the Giants’ plans to build 380 foot tall towers for luxury condos on waterfront open space, zoned for a public park, also gets the public scrutiny needed to turn them into sensible projects worthy of our unique waterfront.”