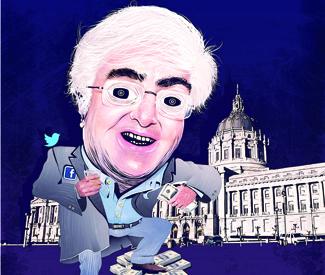 San Francisco Magazine just published an intriguing interview with Salesforce CEO Marc Benioff, and Benioff’s attitude and approach to San Francisco seems to be a striking contrast to the city’s other top tech titan, venture capitalist Ron Conway, who we profiled over a year ago.

While Conway burst onto the political scene a few years ago with a pledge to destroy the progressive movement in San Francisco, sponsoring Mayor Ed Lee and his allies as the main vehicle for those ambitions, Benioff is a San Francisco native who seems to understand this city’s values and accept the responsibilities that come with great wealth and power.

“I say, if you want to be in this city and take advantage of all this great infrastructure—our mass transit, our schools, our hospitals, the safety and stability that we have—then also give back. These are the table stakes for doing business here. This is not a new idea,” Benioff told San Francisco Magazine Editor Jon Steinberg in this extended Q&A.

The news peg for the article was a new Benioff initiative in which he’s asking local tech companies to contribute $500,000 each to Tipping Point Community, which funds local community service programs, an effort that Benioff calls SF Gives.

“The first person I called was Ron Conway. I said, ‘Ron, what we’re going to do is get companies to give $500,000, and I’m going to raise $10 million, and we are going to give back to S.F. en masse with money from organizations, not just individuals.’ He said, ‘This is never gonna work. I run sf.citi [a political advocacy group for 500 local tech companies], and people won’t even pay their dues. You’re not going to raise millions of dollars,’” Benioff told the magazine.

The difference is that Conway is pushing an aggressive political agenda, seeking business tax breaks and special treatment from City Hall for the companies he’s invested in while being tone-deaf to the political backlash it’s causing in San Francisco, one that Benioff acknowledges and says the industry must address.

“Because this is not about any political agenda. It’s not. It’s about pure-play philanthropy: giving back to nonprofits and NGOs that can make a difference in S.F,” was how Benioff answered the question about why companies are more willing to donate to SF Gives than sf.citi.

As we documented in our profile of Conway, this guy is a old school conservative with a history of right-wing politics who conveniently dropped his Republican Party affiliation when he arrived in San Francisco pushing an aggressive pro-business agenda.

As we wrote in our article about an event seven years ago when Conway burst onto the scene and declared his intentions: “’This guy stood up and said that we have to take the city back from the progressives,’ [former Mayor Art] Agnos told us. ‘I barely knew who he was. I’ve been in San Francisco since 1966, and here he comes telling us what to do.;”

To understand this tale of two tech titans, contrast that approach with this comment from Benioff: “It’s a city of innovation, of flamboyance, of transformation, and during boom times, S.F. always changes and evolves. But tied into that has always been generosity: the Haas family, the Hellmans, the Fishers, the Shorensteins. During every one of these boom times, the people who benefited the most were also giving back the most. But this time around, we haven’t been able to talk about a broad philanthropic effort to couple with the growth. So this seemed like a great opportunity.”