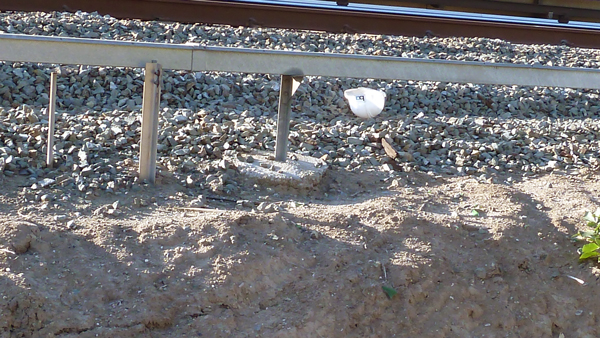 The California Occupational Safety and Health Administration is fining Bay Area Rapid Transit $210,000 for three “willful/serious” safety violations connected to the death of two transit workers, citing a lack of safety measures at BART as the fault of their deaths. BART was fined maximum amounts allowed for the offenses, officials said.

“Employers have a responsibility to ensure worker safety,” acting Cal/OSHA Chief Juliann Sum said in a statement. “Safety standards are designed to save lives and they were not followed.”

Two transit workers were killed October last year during the final days of the BART strike. As we reported then, Christopher Sheppard, a BART manager and member of the AFSCME union, and Larry Daniels, a contractor, were inspecting a “dip in the rail” before they were hit by an oncoming train. The two workers were required to go through what’s called a Simple Approval process to get permission to work on the track.

It’s that Simple Approval process that came under fire in the citation.

“Employer’s control method, namely the ‘Simple Approval’ procedure, does not safeguard personnel working on tracks during railcar movement,” the citation reads. “The employer allowed workers to conduct work on the railway tracks where trains were travelling in excess of sixty-five (65) miles-per-hour.”

“The employees had no warning that a train moving at more than 65 miles-per-hour was on the C1 railway track approaching the location where they were working.”

“Passenger and employee safety is our top priority at BART.  BART has fundamentally upgraded its safety procedures with the implementation of an enhanced wayside safety program and a proposed budget investment of over $5 million in additional resources to bolster BART’s safety performance,” she said. “Cal/OSHA has informed BART these changes correct the concerns which are at the heart of their citations, designating the issues as ‘abated,’ meaning that none are continuing violations or pose continuing safety hazards.”

The statement goes on to say that BART meets CPUC safety standards, though as we’ve seen with PG&E (San Bruno) and Uber (the New Year’s Eve death of Sofia Liu), those standards have been demonstrated to be at times, lax.

The three violations were deemed “abated” within the citaiton. The citation tasked BART with reassigning job assignments of untrained personell, not allowing unqualified workers near energized equipment and facilities, and “controls to safeguard personell during railcar movement shall be instituted.”

Simple Approval has since been terminated, BART Spokesperson Alicia Trost told the Guardian.

“BART permanantly eliminated Simple Approval immediately following the tragic deaths,” she said. “We now require work orders for anyone who goes wayside.  We are also implementing the extra layers of protection for track workers.”

Notably, the two workers were killed as BART management attempted to train managers to operate trains during the strike, according to the National Transportation Safety Board, who is investigating the incident.

Driver of train who struck workers was in operator training. Had held other positions with BART.

Left, a dimly lit BART tunnel. Right, an oncoming train. BART has been cited for safety issues by CAL/OSHA before, including lighting issues which some say led to the death of another BART worker years ago.

The citation specifically lambasts flimsy safety process of Simple Approval, the process workers formerly used to keep the Operations Control Center “aware of the presence of personnel in a specified location in the trackway,” according to BART training manuals. When workers are preparing to work on a track, they recited the simple approval to the Operations Control Center, also known as central control. It works like signing a waiver, saying that you understand the rules of safety, and more importantly, that you can work on the track without diverting trains.

This isn’t the first time BART has run afoul of CAL/OSHA citations, they’ve racked up over 20 in the past years. A hearing held shortly after the two workers’ death also brought many of these problems to light.

Shortly after the accident, Saul Almanza, a longtime BART safety trainer, told us the section of track the two workers died on “crested the hill a little bit.” Having a sight line is important, he said, because you can’t use your ears to hear a train coming.

“It’s like a jet flying over you, you don’t hear it until it’s past you,” he explained. “I always teach in my class: ‘You don’t listen for trains, you look for trains.’”

Below we’ve embedded the citations issued to BART.