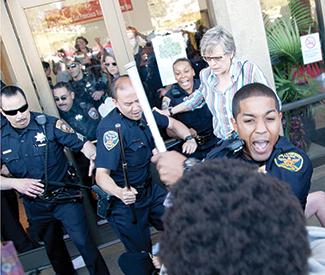 That seems to be the idea the accrediting commission vying to close City College of San Francisco floated in a San Francisco Chronicle editorial Sunday, outlining a “new way out.”

To save itself, they wrote, the college must terminate its own accreditation and apply for “candidacy” status, essentially applying to be accredited as if it were a brand-new school.

“Candidacy would allow City College a fresh start,” wrote Accrediting Commission for Community and Junior Colleges Chair Sherill Amador, and Steven Kinsella, the co-chair. “It would have two to four years to complete its recovery and to ensure that it meets all accreditation standards.”

The recommendation is the latest twist in a long saga over the fate of City College of San Francisco.

Last July, the ACCJC told City College its degree accreditation would be revoked in a year, which would force the college to close. When the news first hit City College saw its enrollment drop by the thousands. The school served as many as 100,000 students at its highest enrollment, but now has a student body of 77,000. The college’s chancellor, Arthur Q. Tyler, noted the enrollment drop in a public letter.

“As you may have heard it has been suggested by some that City College apply for ‘candidacy status’ as a mechanism for addressing our current accreditation process,” Tyler wrote in a letter to the college community. “Let me be clear: we are not considering withdrawing our accreditation. To do so would severely harm our current and future students as well as undermine our current enrollment efforts.”

The editorial from the ACCJC may signal that the accrediting commission intends to deny any appeals made by City College, higher-ed experts told the Guardian. City College’s faculty union AFT 2121 President Alisa Messer agreed.

“The ACCJC — or at any rate, two of its leaders — have announced through this editorial that they have already decided to reject the college’s appeal and move forward with disaccreditation,” she told the Guardian. “Our concern all along has been that nothing CCSF could do would satisfy this commission. Unfortunately, this latest action appears to confirm that.”

Notably, despite all indicators to the contrary, the ACCJC editorial wrote “Internal discord at City College has prevented sufficient progress.”

But in a Chronicle editorial written by Mayor Ed Lee and the California Community College Chancellor Brice Harris, the pair noted City College’s tremendous progress in changing the school. These are changes the college community hasn’t necessarily agreed with, leading to recent protests against the current administration. Despite this resistance, the pair of officials made an impassioned plea for the ACCJC to give City College more time to enact the less-than-popular changes.

“The commitment to reform and the accomplishments already made show that the college is on the right track,” Lee and Harris wrote. “City College has earned the right to finish the job by setting itself back on course.”

But the editorial penned by the ACCJC seems to rebuff any notion that they’ll give City College more time, unless City College revokes its own accreditation.

All along, politicians and the college’s current administration towed the ACCJC line — even though the accreditors advocated for City College to disinvest in its neediest students, take away important neighborhood campuses serving disadvantaged communities, and ignored the college community’s wishes.

On the other side of the imaginary line in the sand, the faculty union and student protesters have advocated against many of the changes proposed by the ACCJC, calling its actions unjust. City Attorney Dennis Herrera’s lawsuit adopted the viewpoint of the the latter group, suing the ACCJC for using its position as accreditor to advocate for the “student success agenda,” which aims to transform community college into degree-mills at the expense of students not specifically seeking degrees.

Stepping on their conservative, misinformed soapbox, the San Francisco Chronicle wrote an editorial lambasting Herrera and the advocates, last August.

“When you have a losing argument, change the subject,” they wrote. “That’s been the approach of certain City College defenders who want the attack an accreditation commission instead of the serious problems it has identified.”

Even the state community college chancellor criticized Herrera’s lawsuit, in an open letter penned just a few months ago.

“Court intervention is not necessary to keep City College open,” California Community College Chancellor Brice Harris wrote. “Characterizations that the cases before the court are a ‘last-ditch’ effort to ‘save’ City College are inaccurate and will do additional damage to the college’s enrollment.”

But Herrera filed for an injunction, which was granted by the judge, which would stop City College from closing until the legal proceedings have finished. The trial date is now set for October.

With the ACCJC signaling it has no intention of allowing an appeal, Herrera’s lawsuit, Mandelman said, may be the college’s only hope.

“The state chancellor, the mayor, and the Chronicle have all said ‘this is the way the process will work and Dennis Herrera should not have brought the lawsuit,'” he said. “Now it seems quite likely that lawsuit will be the only thing that can save City College.”