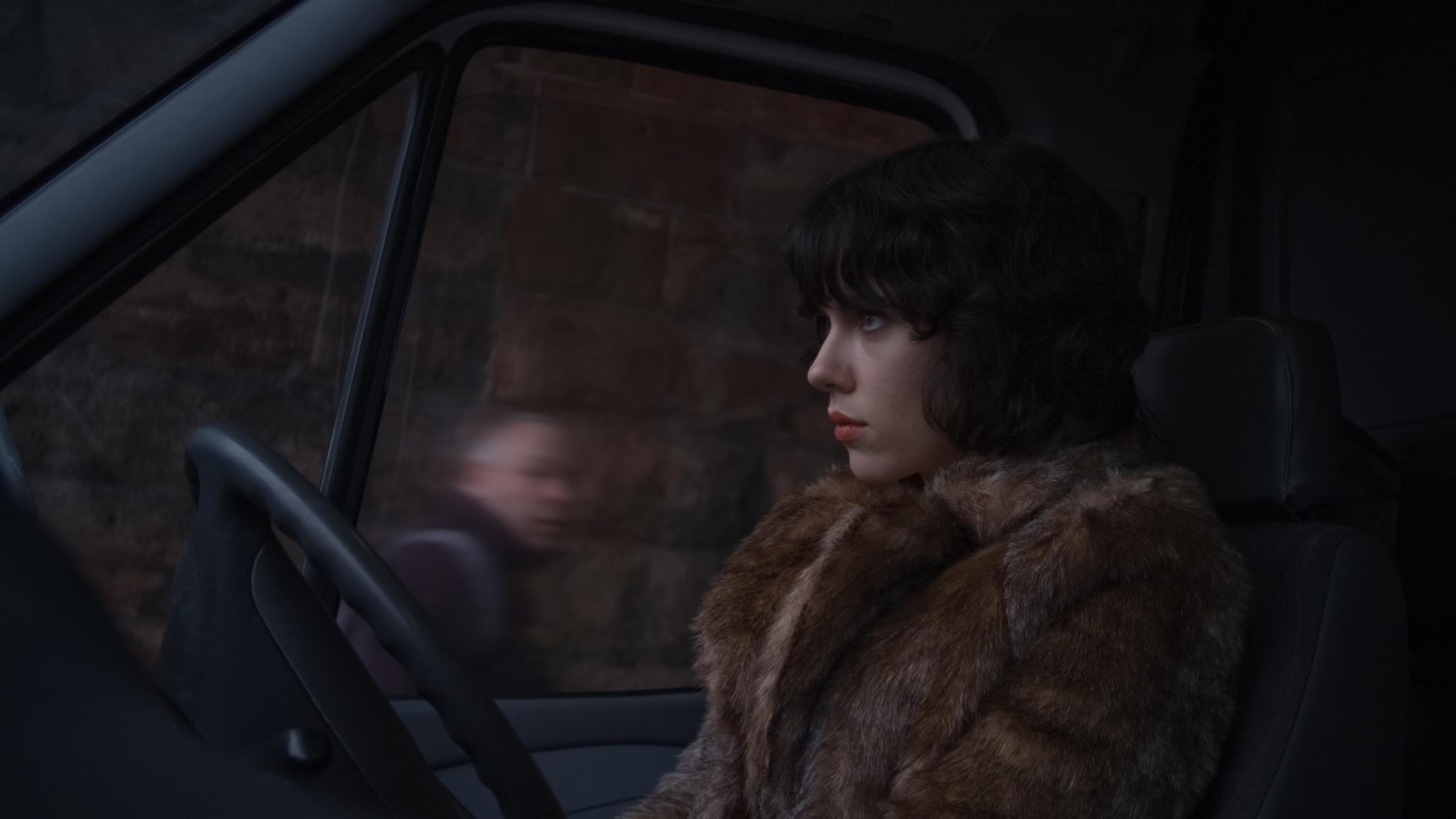 It’s Friday, which means only one thing: new movies R herrre! Though Captain America 2: The Winter Soldier will probably keep body-slamming all the box-office competition, there are some not-to-be-missed flicks just arriving in theaters, including two fascinating docs and two eerie tales, including the remarkable Under the Skin. Read on!

Dom Hemingway We first meet English safecracker Dom (Jude Law) as he delivers an extremely verbose and flowery ode to his penis, addressing no one in particular, while he’s getting blown in prison. Whether you find this opening a knockout or painfully faux will determine how you react to the rest of Richard Shepard’s new film, because it’s all in that same overwritten, pseudo-shocking, showoff vein,  Sprung after 12 years, Dom is reunited with his former henchman Dickie (Richard E. Grant), and the two go to the South of France to collect the reward owed for not ratting out crime kingpin Mr. Fontaine (Demian Bichir). This detour into the high life goes awry, however, sending the duo back to London, where Dom — who admits having “anger issues,” which is putting it mildly — tries to woo a new employer (Jumayn Hunter) and, offsetting his general loutishness with mawkish interludes, to re-ingratiate himself with his long-estranged daughter (Emilia Clarke). Moving into Guy Ritchie terrain with none of the deftness the same writer-director had brought to debunking James Bond territory in 2006’s similarly black-comedic crime tale The Matador, Dom Hemingway might bludgeon some viewers into sharing its air of waggish, self conscious merriment. But like Law’s performance, it labors so effortfully hard after that affect that you’re just as likely to find the whole enterprise overbearing. (1:33) (Dennis Harvey)

Draft Day Kevin Costner stars in this comedy-drama set behind the scenes of the NFL. (2:00)

Finding Vivian Maier Much like In the Realms of the Unreal, the 2004 doc about Henry Darger, Finding Vivian Maier explores the lonely life of a gifted artist whose talents were discovered posthumously. In this case, however, the filmmaker — John Maloof, who co-directs with Charlie Siskel — is responsible for Maier’s rise to fame. A practiced flea-market hunter, he picked up a carton of negatives at a 2007 auction; they turned out to be striking examples of early street photography. He was so taken with the work (snapped by a woman so obscure she was un-Google-able) that he began posting images online. Unexpectedly, they became a viral sensation, and Maloof became determined to learn more about the camerawoman. Turns out Vivian Maier was a career nanny in the Chicago area, with plenty of former employers to share their memories. She was an intensely private person who some remembered as delightfully adventurous and others remembered as eccentric, mentally unstable, or even cruel; she was a hoarder who was distrustful of men, and she spoke with a maybe-fake French accent. And she was obsessed with taking photographs that she never showed to anyone; the hundreds of thousands now in Maloof’s collection (along with 8mm and 16mm films) offer the only insight into her creative mind. “She had a great eye, a sense of humor, and a sense of tragedy,” remarks acclaimed photographer Mary Ellen Mark. “But there’s a piece of the puzzle missing.” The film’s central question — why was Maier so secretive about her hobby? — may never be answered. But as the film also suggests, that mystery adds another layer of fascination to her keenly observed photos. (1:23) (Cheryl Eddy)

The Galapagos Affair: Satan Came to Eden Extensive archival footage and home movies (plus one short, narrative film) enhance this absorbing doc from San Francisco-based Dayna Goldfine and Dan Geller (2005’s Ballets Russes). It tells the tale of a double murder that occurred in the early 1930s on Floreana — the most remote of the already scarcely-populated Galapagos Islands. A top-notch cast (Cate Blanchett, Diane Kruger, Connie Nielsen, Josh Radnour) gives voice to the letters and diary entries of the players in this stranger-than-fiction story, which involved an array of Europeans who’d moved away from civilization in search of utopian simplicity — most intriguingly, a maybe-fake Baroness and her two young lovers — and realized too late that paradise isn’t all it’s cracked up to be. Goldfine and Geller add further detail to the historic drama by visiting the present-day Galapagos, speaking with residents about the lingering mystery and offering a glimpse of what life on the isolated islands is like today. (2:00) (Cheryl Eddy)

Joe “I know what keeps me alive is restraint,” says Nicolas Cage’s titular character, a hard-drinking, taciturn but honorable semi-loner who supervises a crew of laborers clearing undesirable trees in the Mississippi countryside. That aside, his business is mostly drinking, occasionally getting laid, and staying out of trouble — we glean he’s had more than enough of the latter in his past. Thus it’s against his better judgement that he helps out newly arrived transient teen Gary (the excellent Tye Sheridan, of 2012’s Mud and 2011’s The Tree of Life), who’s struggling to support his bedraggled mother and mute sister. Actually he takes a shine to the kid, and vice versa; the reason for caution is Gary’s father, whom he himself calls a “selfish old drunk.” And that’s a kind description of this vicious, violent, lazy, conscienceless boozehound, who has gotten his pitiful family thrown out of town many times before and no doubt will manage it once again in this new burg, where they’ve found an empty condemned house to squat in. David Gordon Green’s latest is based on a novel by the late Larry Brown, and like that writer’s prose, its considerable skill of execution manages to render serious and grimly palatable a steaming plateload of high white trash melodrama that might otherwise be undigestible. (Strip away the fine performances, staging and atmosphere, and there’s not much difference between Joe and the retro Southern grindhouse likes of 1969’s Shanty Tramp, 1974’s ‘Gator Bait or 1963’s Scum of the Earth.) Like Mud and 2011’s Killer Joe, this is a rural Gothic neither truly realistic or caricatured to the point of parody, but hanging between those two poles — to an effect that’s impressive and potent, though some may not enjoy wallowing in this particular depressing mire of grotesque nastiness en route to redemption. (1:57) (Dennis Harvey)

Oculus Tim (Brenton Thwaites) and Kaylie (Karen Gillan) are grown siblings with a horrible shared past: When they were children, their parents (Rory Cochrane, Katee Sankhoff) moved them all into a nice suburban house, decorating it with, among other things, a 300-year-old mirror. But that antique seemed to have an increasingly disturbing effect on dad, then mom too, to ultimately homicidal, offspring-orphaning effect. Over a decade later, Tim is released from a juvenile mental lockup, ready to live a normal life after years of therapy have cleaned him of the supernatural delusions he think landed him there in the first place. Imagine his dismay when Kaylie announces she has spent the meantime researching aforementioned “evil mirror” — which turns out to have had a very gruesome history of mysteriously connected deaths — and painstakingly re-acquiring it. She means to destroy it so it can never wreak havoc, and has set up an elaborate room of camcorders and other equipment in which to “prove” its malevolence first, with Tim her very reluctant helper. Needless to say, this experiment (which he initially goes along with only in order to debunk the whole thing for good) turns out to be a very, very bad idea. The mirror is clever — demonically clever. It can warp time and perspective so our protagonists don’t know whether what they’re experiencing is real or not. Expanding on his 2006 short film (which was made before his excellent, little-seen 2011 horror feature Absentia), Mike Flanagan’s tense, atmospheric movie isn’t quite as scary as you might wish, partly because the villain (the spirit behind the mirror) isn’t particularly well-imagined in generic look or murky motivation. But it is the rare new horror flick that is genuinely intricate and surprising plot-wise — no small thing in the current landscape of endless remakes and rehashes. (1:44) (Dennis Harvey)