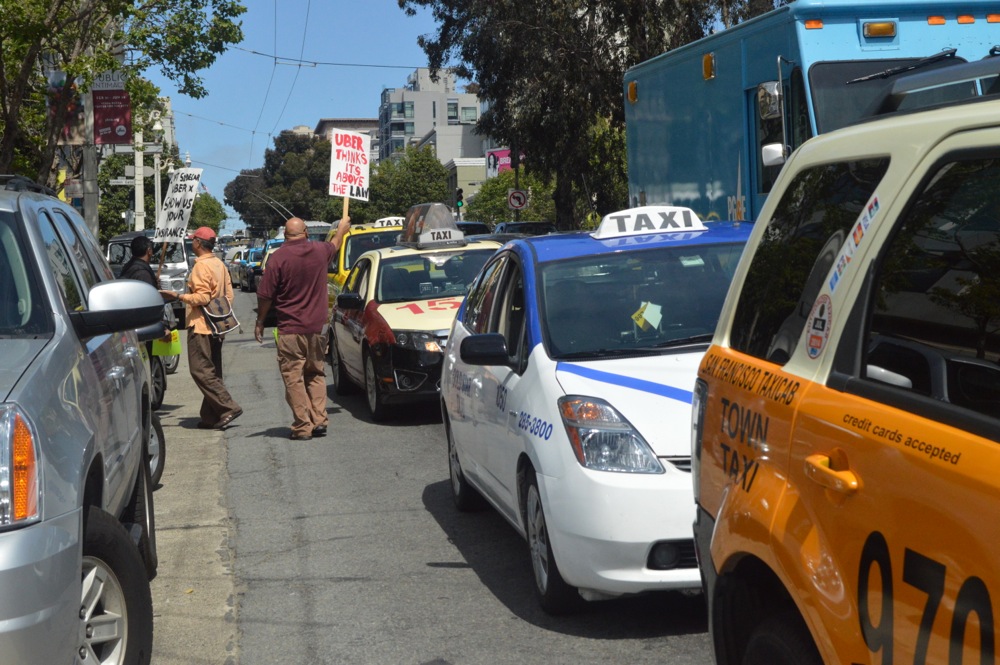 Car horns honked and tempers flared as around 30 taxi cabs circled around the California Public Utilities Commission yesterday [Wed/9], protesting what the cabbies call lax regulations of rideshare companies such as Uber, Lyft, and Sidecar.

“They’re totally unfair competition,” said cab driver Jonathan Khin, a 20-year cabbie who came to San Francisco decades ago from Burma. “They don’t have to pay regulations and fees that we do.”

The drivers complaints over the rideshares, known legally as Transportation Network Companies, were many: the TNCs don’t provide adequate insurance for drivers, don’t have the number of cars regulated (like cabs are), and don’t have to pay regulatory fees that cabs currently pay. This all leads to an uneven playing field, and the taxi cab industry is getting creamed.

“I have 50 percent less daily riders,” than he used to, said Myo Winn, a 10-year driver for companies like Yellow Cab and DeSoto.

Cabbie Jonathan Khin holds up his SFMTA issued taxi ID, one of the many regulatory elements of the taxi industry that rideshares, or TNCs, do not provide.

But the taxi industry has its own cross to bear. It’s no secret that finding a taxi in San Francisco can be nigh-impossible at some hours, and even in some neighborhoods. Carl Macmurdo, the president of the Medallion Holders Association, didn’t mince words about it: “There’s been bad, poor service over the years from our industry.”

That bad service left the taxi companies wide open for “disruption,” as the tech companies call it. But that disruption came at a cost — the still-young TNC industry has struggled to provide adequate insurance to its drivers, even suggesting that drivers personal insurance policies would protect them while ferrying customers. As we’ve written about before, this has left passengers, drivers, and even pedestrians left with huge bills for collisions that taxi companies have a history of paying out with less hand-wringing.

If the TNCs provided insurance like taxis did, would the taxi industry still have a problem with them?

“Yes,” Macmurdo told the Guardian, as the horns from nearby cabs continued to honk. “Seattle deregulated taxis and let medallions be open, and it was chaos. Government [regulations] balance the need between available cab service and the ability of drivers to make a decent living. There are thousands of the TNCs on the road and it’s destroyed the industry. There are too many vehicles on the road competing.”

But Marzia Zafar, director of the Policy and Planning Division at the CPUC, said that constraining competition is not the CPUC’s role.

“Our role is not to play favorites,” she told the Guardian, standing in the courtyard of the CPUC building just after the protest ended. “We made the [TNC industry] safe, and let the free market do its job.”

Other regulatory bodies have gone the opposite way. Seattle City Council last month voted to limit TNC vehicles to 150 in the city at any one time, and the protest came on the heels of the California Insurance Commissioner Dave Jones issuing a public letter to the CPUC calling for TNCs to carry the burden of insurance.

Uber and Lyft have made progress in expanding their insurance coverage, he said, but the gap still exists, putting drivers, passengers, and pedestrians at risk.

“Our investigative hearing revealed serious insurance gaps in the current business model of Transportation Network Companies such as Uber, Lyft and Sidecar,” Jones wrote in a statement to the press. “As long as TNCs are encouraging non-professional drivers to use their personal vehicles to drive passengers for a profit, a risk which personal automobile insurance simply does not cover, TNCs should bear the burden of making sure that insurance is provided. Our recommendations will ensure there is insurance protection for passengers, drivers and pedestrians.”

The report from the insurance commissioner asserted a long standing complaint of taxi drivers. Personal auto insurers, the report wrote, are not planning to offer coverage of TNC drivers “in the near future, if ever.”

Now it’s up to the CPUC to create new, stricter regulations to protect the public. Those regulations may come as soon as September, Zafar said.