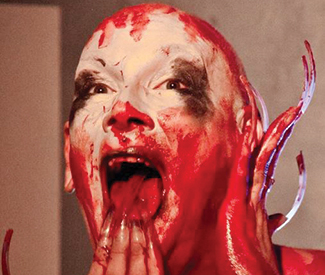 SUPER EGO Who celebrates her 50th birthday by wallowing in a 40-gallon kiddie pool of chocolate pudding at the city’s oldest gay bar? Who grew so enthusiastic during a drag number at Trannyshack in 2003 that she bent all the way backward and broke her spine? Who flits so deliciously through the spectrum of sexuality and gender that I last heard her identify herself as an MTFTM Nearsighted Bi-Polar Bear With Vampiric Tendencies?

Who is one of our last remaining links to SF’s gloriously weird club past? Phatima Rude, that’s who. The perennial ghoulish go-go and beautiful creature is living history. After moving here in the late ’80s and flirting with the Imperial Court drag dynasty, she dived into the underground — looking, at 300-plus pounds in a blond wig, “like Divine by way of Barbra Streisand” — starting at the legendary Club Uranus among such luminaries as Jerome Caja, Michael Blue, DJ Lewis, and Michael Angelo.

“I walked into that place and knew I had found my family, I had finally found my freaks,” she told me about Uranus. “The wonderful thing about drag is you can be someone else. I never was in the closet — I never knew what that was. But in drag, I no longer had to be Kevin from Minnesota.” Her first drag number, at one of the first Trannyshacks, involved dressing in clothing from dead or dying friends, and stripping each piece off one by one.

Phatima’s also a prime example of what it takes to hold on as an artist in this town. Ladies and Gentlemen: Phatima Rude, a short film by ethnographer Paul King premiering at Peaches Christ’s essential Underground Film Festival, documents the months last year that she spent living in a van on disability insurance, after she had to leave her shared artists’ co-op.

“It was actually a good experience,” Phatima, who’s now happy to have a place in a downtown SRO, said. “It humbled and stabilized me. You become very aware of where you are in the universe when you live on the street. When my mother and I first moved here and were staying in a shelter, I remember the pastor in charge saying, ‘The hardest step is from the gutter to the curb.’ And I never forgot that.”

Now Phatima has hit another creative peak, appearing in challenging Leigh-Bowery-in-a-blender outfits at parties like future-gothy monthly Dark Room at the Stud, and making music with her band The Unicorns R Dying, or T.U.R.D. What has she learned from her journey so far? “Life is tenuous, we’re all so blessed to be here, and drag is the gateway to the world!”

Sometimes you just want some engaging, melodic nu-disco house that will make you sweat without tearing out your brain. Like fellow earworm heartthrob the Magician, Italian-Belgian cutie Vito de Luca delivers in spades.

Smart, fantastical bass-laden soundscapes from this French producer with an excellent ear. (Check new EP Apache and his ace Electronic Beats on Air mix.) With Branchez.

When this Chicago afro-centric house master was booted off the decks by idiots in Miami a couple years ago, it pointed up the strange polarity of dance music today. Luckily Ferrer’s deep beat goes on.

Last weekend was alive with music, celebrating the life of Frankie Knuckles. Beloved Chicago boogie-house wiz Derrick, one of Frankie’s direct heirs, will bring even more of Frankie’s spirit down. With UK ’90s fetishist duo Bicep.