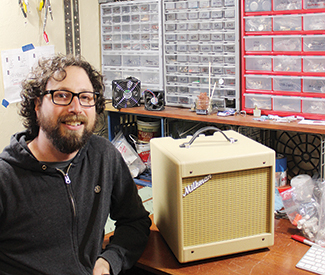 LEFT OF THE DIAL It’s a question most musicians are all too familiar with. If you tell someone at a party that you’re a working musician, that person is inevitably going to ask — after a few polite questions about your hardcore band/classical jazz quartet/street-corner performance art where you alternate reading Blake passages with playing the accordion — “So, you have a day job?”

In a city like San Francisco, especially, the answer is almost always “yes.” And there’s no shame in that! Bartender, barista, Whole Foods cashier, teacher, graphic designer, marijuana dispensary employee — I’ve heard all of these in just the last month or so of musician interviews. A person’s gotta eat.

And then there’s Tim Marcus. On a recent, rainy Tuesday afternoon, the guitarist was hunkered down in a small bedroom-turned-electrical engineering workshop in the Lower Haight apartment he shares with his girlfriend. Marcus, 35, is one of the most sought after steel guitar players in the Bay Area. He spent the latter half of the aughts with the now-defunct (but much loved) San Francisco Americana band Or, the Whale. A few hours after this interview, he’ll be playing Amnesia with alt-country rocker Tom Rhodes; two days later he’s heading out on the road for a three-week East Coast tour with San Francisco folk songstress Kelly McFarling. But right now he’s at his day job: Flanked by stacks of glass tubes, fuses, and various tiny metal parts whose purpose we can only guess at, he’s building an amplifier. And not just any amplifier. An amplifier of pedal steel dreams.

As the founder, owner, and sole employee of Milkman Sound, Marcus has created a living from building toys — and he’s the first to call them that — for musicians who are just as choosy as he is.

“I started playing guitar when I was 10, and played in bands all through middle school, high school, college,” says Marcus. “I started doing it professionally in the early 2000s. And there just wasn’t what I’d consider to be a boutique option [for amplifiers] for pedal steel guitars. If you drive a car, most people buy a Ford or a Subaru, but you have the option to buy a Ferrari. As a pedal steel player, in particular, you really wound up shoehorned into buying Fords and Chevrolets, things that are made for [regular] guitar players.”

He gained the technical know-how required to build amplifiers from a couple places. Back East, he worked for a company that did repairs on audio-visual equipment, where he’d hand off old or unused parts to a friend who built amps in exchange for his tutelage. After moving out to San Francisco, Marcus went to work for BBI Engineering, an SF company that installs AV and theatrical systems for museums “and other places that use automated amps, where you walk in, push a button and everything happens,” he says. “I learned a lot about making things that work well, that aren’t going to break if they’re subjected to kids poking at them day, in day out.”

Frustrated at being unable to get the clarity and quality of sound he wanted out of his guitar, Marcus started small, ordering the best parts he could find — some vintage, some new, with a priority on materials made in America — to build one amplifier for himself. He still has it (it’s sitting in a custom Milkman slipcover in the corner of the workshop, which, Marcus notes, is more easily navigated than usual — he just shipped out a bunch of amps) but he’s revamped that first one more times than he can count.

He’s an admitted perfectionist as well as a workaholic, he says, but it runs in the family: the name “Milkman” is a nod to his longstanding family business in Connecticut, starting with a small dairy farm his great-grandfather bought and built out. “The spirit of my great-grandfather was like ‘I’m going to sell something that I make,’ and my family’s always continued that,” says Marcus. “That definitely plays a role in my work ethic.”

Since he built that first amp four years ago, he’s been crafting custom amps for guitar and steel players all over the country. He does every part of production himself — friends have asked to help so they can learn, but he’s “crazy OCD about doing everything” with his own hands — and he builds each amp to a customer’s specifications, one at a time. He’s branched out into amplifiers for regular guitarists, and for bass players. Each amp takes him a couple of days to build, and then he tests it meticulously by (someone’s gotta do it) playing guitar through it lots of different ways.

Marcus still buys parts from small US-based companies where possible, including many in California, which he says is expensive but worth it for the quality. They don’t manufacture the glass tubes that go into amplifiers in the US at all, anymore, he explains, which is a shame, because the ones produced here in the ’50s and ’60s were great — they played an unsung role in creating what we think of as the early American rock ‘n’ roll sound. (Marcus can and will explain the history of amplifiers to you, as well as the differences between every iteration of each part that goes into them, at the drop of a hat.) The majority of his cabinets come from a revered one-man shop in Nashville, though Marcus has just begun working with a family business in Oakland to try to make the operation even more local.

The price for all this care and OCD-level handiwork? Milkman amps run from $900 for a five-watt “half pint” amp to $3000 for the more powerful models. But for the musicians Marcus is catering to, that’s well worth it — last year, he sold 40 amplifiers; this year, by the end of March, he’d already shipped 20. Milkman amps have been out on tour in Eric Clapton’s band, thanks to acclaimed steel player and producer Greg Leisz taking a liking to Marcus’ simple, vintage rock ‘n’ roll aesthetic and careful technical work; they can also be heard on the most recent Daft Punk and Norah Jones records.

Maybe most impressively: Marcus seems to have cracked a code. He’s surviving in San Francisco by doing something he loves — and something that allows him to stay here as a working musician. He stopped working for his old audio-visual company about a year ago.

“But there’s also pride in that,” he says. “That’s why it says ‘Made in San Francisco, USA’ on the front. It’s not easy to do things in San Francisco, so when you do I think it’s just that much more awesome. I kind of got into the pirate ship mentality, and working for myself is great. I get up early — but I haven’t set an alarm clock in a long time.”