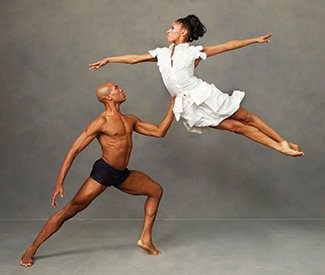 DANCE Alvin Ailey American Dance Theater is the country’s most financially successful dance enterprise. Apparently, it regularly ends with a surplus, something most everyone else can only sigh over. But the success comes with a price: it tours like no one else. That makes it hard to keep performances fresh, a repertoire fluid, and dancers focused. And yet, the dancers showed little wear and tear on this 14th stop of their current 23-city US tour.

Two reasons account for the dancers’ success. They have one of the great masterpieces of 20th century art in their repertoire, and they never hit the road without it: Alvin Ailey’s 1960 Revelations. Audiences around the world want it. Again, and again, and again. There are times when I am tempted to skip it. I never do, and I never regret it. The only piece of choreography I feel similarly about is Giselle (and that music is not half as good).

Ailey dancers are also an extraordinarily beautiful lot — fierce technicians, with immaculate ensemble work, the women as strong as the men. For speed, attack, sense of space, and range of motion, they have little competition. Most of them stay with the company until they quit dancing, so an audience feels like it gets to know them over the years.

But Ailey dancers also look like they come out of one mold — the Ailey mold. One of the issues that has plagued the company for years is the rest of the repertoire. Bringing in new choreography has been a hit-and-miss affair. Robert Battle, artistic director for the last three years, has made valiant efforts to cast his net wider. Judging from the company’s opening night at UC Berkeley’s Zellerbach Hall this year, it still is something of a hit-and-miss affair.

Aszure Barton’s LIFT and Ronald K. Brown’s Four Corners are Battle commissions from 2013. Watching these two works — the first of which clocked in at 26 minutes, the second at 24 minutes — offered radically different experiences of time passing. LIFT flattened out thin ideas long beyond their welcome, and despite Curtis Macdonald’s assertive beat, the work began to drag quickly. Four Corners spun its sturdy gossamer web to the point where you didn’t want to let it go.

Barton, whose own company performed somewhat more successfully as part of San Francisco Performances in February, appears to have looked at the Ailey dancers and decided on the kind of suit that she wanted to tailor for them. While it fit them physically, it constrained their expressivity. LIFT’s vocabulary is somewhat reminiscent of African traditions — wide stances, articulated shoulders and hips, strong flat-footed stepping, and arms that fly away when not engaged in body-clapping. But Barton didn’t succeed in pulling these elements into a coherent statement.

A prominent male trio, with powerful Jermaine Terry as its leader, appeared to search the ground for something. Often the dancers performed with their backs to us. Men and women moved in and out of the shadows, arms often flailing, feet fussily engaged when not stomping.

Two duets were oddest of all. Matthew Rushing — still dancing fabulously — and Hope Boykin engaged each other in a hysterically laughing and screaming match. Ghrai DeVore’s lips became a suction cup against Marcus Jarrell Willis’ chest, turning the two of them in a four-legged creature of uncertain origin. Is that what those male searchers were trying to escape from?

Brown’s Four Corners, apparently, is inspired by the apocalypse’s four horsemen. I didn’t see it except when some unseen forces, perhaps launched by a divine spirit, perhaps just a strong wind, appeared to animate and propel the performers on some kind of journey toward ecstasy. Brown’s vocabulary has integrated modern dance and African influences like no other choreographer whom I can think of; it has become a language that starts inside and ripples out so that every part of the body seems to sing. The dancers open their torsos in every direction, giving in to the momentum, with their flexible arms turned into wings that keep them buoyed. Yet periodically, like birds alighting, they fold them on their backs and focus on the ground ahead of them.

Rushing is the leader on the lookout for his group of congregants; eventually, he leads them in a single-file procession toward who knows where. He is joined by the regal Linda Celeste Sims and the astounding Belen Pereyra, in an earth-colored outfit that lets you see every tremor, every shift of weight, and every searching glance.

Revelations is what it is, or perhaps not. This was the first time that I remember seeing a white dancer in this quintessential tribute to African American culture. The finale of the piece once again turned into a competition between the audience and the dancers. The audience won. “Rocka My Soul” got a repeat. *