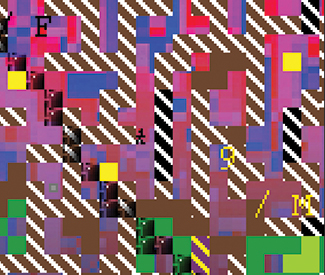 CAREERS AND ED Matt Burdette is a video game environment artist, crafting expansive alien vistas by tapping out ones and zeroes the way a painter flourishes a brush. But unlike paint on canvas, Burdette’s vistas are meant to be explored by video game avatars hunting computerized enemies.

He’s crafted trees and bushes, and paid loving attention to every stem and every leaf, but his proudest project was not nearly so serene. While employed at LucasArts he worked on a later-cancelled project: Star Wars 1313.

Burdette was tasked with blowing up a spaceship.

“They said to me, ‘This needs to look photoreal,'” he told me. “I was all, ‘Hell yeah, let’s do that.'” The video game trailer that played at the 2013 Electronic Entertainment Expo featured a laser toting hero jumping through a burning spaceship. It was hailed by the national press as the most impressive looking new video games on the horizon.

But Burdette was not always a digital craftsman. At one point, he was a pencil and paper artist.

For artists facing hard times in a dwindling San Francisco art scene, the Bay Area’s burgeoning video game industry is rife with possibility. About 100 video game studios call the Bay Area home, according to Game Job Hunter, from Electronic Arts to Zynga. And many of these studios need artists and composers. Burdette made the digital leap from traditional art by studying film visual effects at Savannah College, in Georgia.

“To bring a more artistic sensibility to what is maybe a technical, rigid kind of space is valuable and a lot of fun,” Burdette, 28, said.

Disney later bought LucasArts and laid off many of its staff, and Burdette found a new job at Visceral games crafting environments for Battlefield 4. But despite the video game industry reputation for grueling work hours, he still manages to find time for personal art.

Lately he’s slowly built a virtual island, like a hobbyist building a model ship during off hours.

“It was nice to come home and think, ‘I’ll make a tuft of grass today,'” he said. He then plugged his island into a new virtual reality device known as Oculus Rift, VR goggles that show the player a 3D world that looks eerily real, sensing the player’s head movements and portraying a sense of depth.

“I put on the Oculus and thought I was going to cry. You are there,” he said. “I walked up to a bush and felt physically uncomfortable, like this is impugning on my personal space.”

Burdette may get to play inside virtual worlds some artists haven’t dreamed of, but his reality is the same: Business can be tough.

He noted that many video game designers and artists are laid off after projects are complete, a standard industry practice. Most industry workers, he said, “are very much more mercenaries now.”

Some opt out of the boom and bust system altogether. Liz Ryerson, 26, is an independent game designer, visual artist, and music composer. She’s had hard times, crashing on couches and bordering on homelessness, but found a new way to raise money for her work. She now solicits support on Patreon, a Kickstarter for artists.

Thanks to contributions from fans, she has a spiffy new place by downtown Berkeley where she crafts her indie games.

“Indie game” is a nebulous phrase, of course. But if the multi-million-dollar video game Halo is comparable to the blockbuster film Avatar, Ryerson’s version of indie is closer to the DIY digital videographers of the local Artists’ Television Access. She makes video games for expression’s sake, not necessarily for profit.

Not to say Ryerson isn’t successful. She composed music for the immensely popular Dys4ia, a flash game detailing the lead designer’s gender transition. Ryerson’s own game, Problem Attic, tackles her own personal demons.

Floating crosses pursue the avatar, a stick figure, across a 2D plane. The game world resembles an 8-bit rendering of a brain merged with a nightmare, and the player must traverse frightening but intentional digital glitches. In an industry filled with shoot-’em-up games, it’s esoteric and strange, and that’s how Ryerson likes it.

“The game is definitely David Lynch-inspired, without a doubt,” she said. “Things that are more indefinable, with more of a sensibility to them. That’s what I respond to.”

She’s mostly self-taught, sometimes building games in flash, and scoring the games using computer software like Reason. Though her design ethos couldn’t be further from Burdette’s blockbuster Star Wars games, they share a common bond: They were artists before they were game makers.

“I used to record songs and play guitar,” Ryerson said. “That was one of the biggest things I wanted to do, was be a pop musician.”

Eventually she started remixing video game compositions and posting them to the web via video game music website OCRemix. She studied film in school and made a documentary. The music from a Gus Van Sant film, the visual presentation of comic books, and the movement inherent in a game controller — all of these concepts inspire her work.

Consumers spent over $20 billion on video games in 2012, according to the Entertainment Software Association. But for artists looking for an easy transition to an industry flush with cash, Ryerson and Burdette made one thing abundantly clear: The video game industry is extremely competitive.