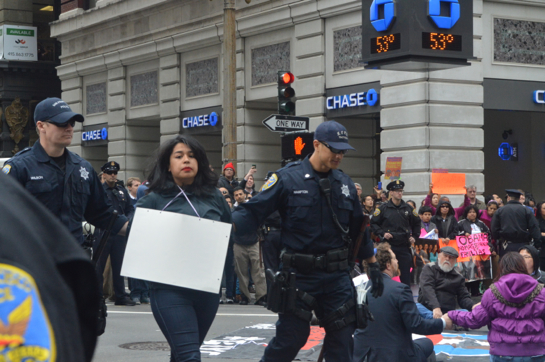 Today [Fri/4] at 11am, the SF Bay Coalition for Immigrant Justice held a protest and rally to urge President Obama to halt all deportations and keep his promise of comprehensive immigration reform.The protest included a group of 23 people, some of which are undocumented immigrants, which took part in a peaceful act of civil disobedience.

All 23 protesters — 15 women and eight men — were arrested; cited for failure to diperse, failure to obey a traffic officer, and blocking an intersection; and booked at the police substation in the Tenderloin before being release, according to the San Francisco Police Department.

More than 30 SFPD officers flanked the march after activists, clergy, and community organizers gathered at One Post St. and made the short but spirited walk to 120 Montgomery St., a building that houses the San Francisco Immigration Court.

Video of two of the arrests.

Rev. Debra Lee, a United Church of Christ pastor working with Interfaith Coalition for Immigrant Rights, said, “We are here… because everyday we see people in our congregations who come to us because their family has been thrown into crisis by the federal government.”

Other clergy members who were arrested include Rev. Richard Smith of St. John Evangelist Episcopal Church, and Rabbi Mike Rothbaum, of Bend the Arc: A Jewish Partnership for Justice. “We work with with people of other faiths because part of the power of the coalition [is that] although we have different faiths, we come together around a common belief  that the migrant should be treated with dignity.” Lee told the Guardian.

Rothbaum delivered a powerful address standing atop a parked pickup truck. Rothbaum held up a black-and-white photo of members of his family being sworn in as US citizens. In the image was his aunt, a Polish Jew.  “I would like to remind President Obama that his father was a wandering man from Kenya,” he said. “That my aunt and his father are no different from the people being held in this building.”

All three clergy members were arrested for taking part in the act of civil disobedience. Others arrested include Akiko Aspillaga, a native born Filipina who came to the US at the age of 10 with a visa. But because of a mix of complications with the employment of her mother and misinformation, Aspillaga and her parents lost their visas. Nevertheless, Aspillaga is now a graduate student at San Francisco State University’s school of nursing. However, because she is undocumented, she cannot receive federal grants or loans and depends on scholarships, and her mother to pay for tuition.

Another was Reyna Maldonado, a City College of San Francisco student born in Mexico. “We are here to demand President Obama to stop deportations. There has already been 2 million deportations.” Maldonado had a picture of Alex Aldana, who is currently being held in a San Diego ICE detention center: “He is one of the people we are fighting for [in addition] to stopping separations of families.”

Even if both women are undocumented, face arrest, and a risk of being turned over to US immigration authorities, they felt the risks were worth it. “I feel like the moral imperative right now, with families being torn apart and all the pain our community… Everything is worth it,” Akiko told the Guardian, “There is a possibility of me being deported but we’re standing up for something we believe in.”

After all the speakers addressed the crowd of about 300 people, the group of 23 sat in a tight circle on a banner that read, “Deporter in Chief.” And parodied President Obama’s “Hope” campaign poster with a pair of handcuffed hands replacing the president’s picture.

Once the group of 23 blocked traffic on the intersection of Sutter and Montgomery, SFPD officers began moving people off the street and onto the sidewalks. Then, one by one, each member of the group had their hands zip-tied behind their back and loaded into one of three SFPD vans.

This protest was part of a national day of action in favor of immigration, and it precedes an even bigger mobilization tomorrow in San Jose.