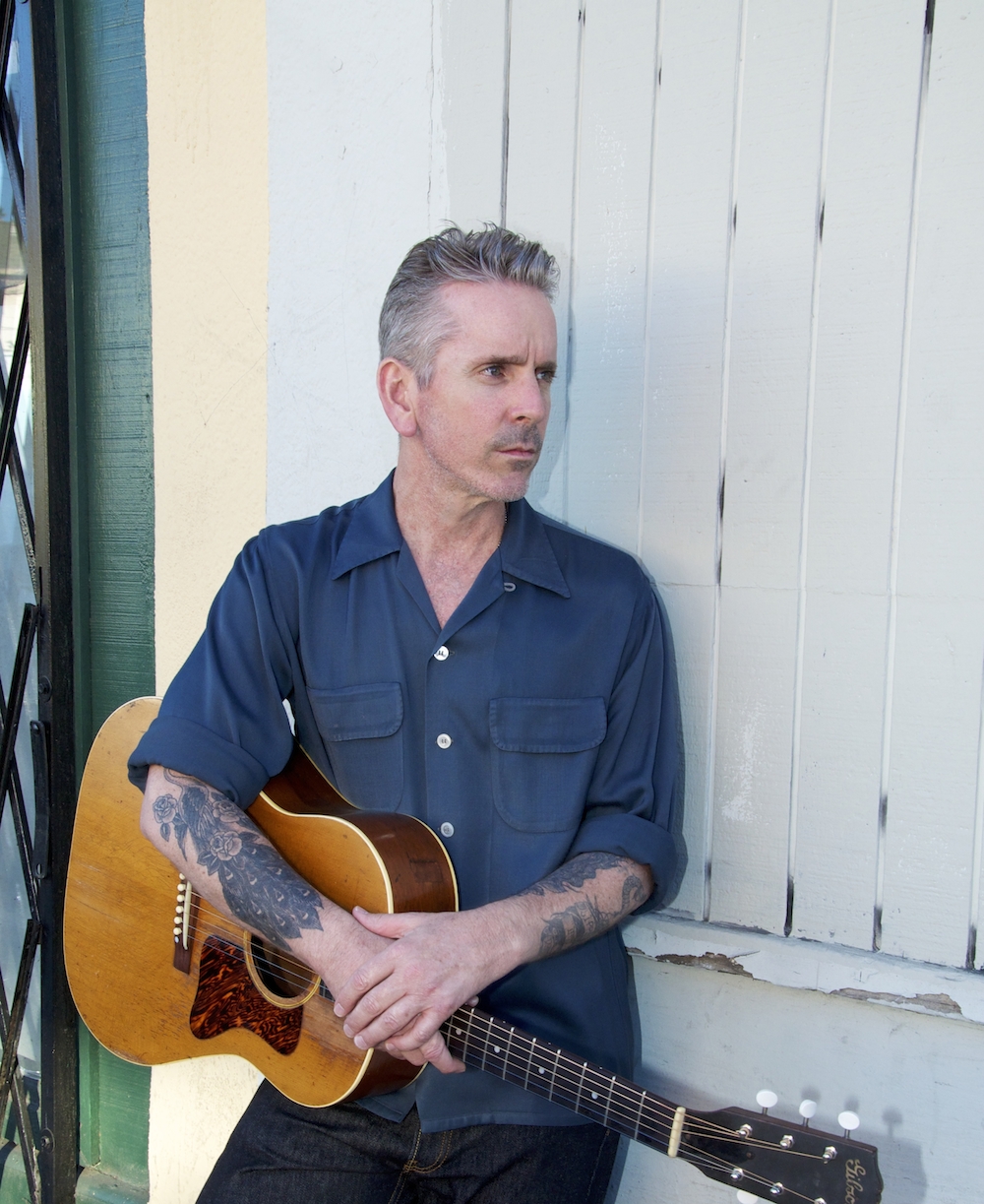 After more than 20 years of playing an important role in the formation and evolution of a variety of bands including the Cadillac Tramps, Youth Brigade, U.S. Bombs and Social Distortion, Jonny “Two Bags” Wickersham is finally stepping into the spotlight on his own with his first solo record, the excellent Salvation Town, (Isotone Records/Thirty Tigers) which hit stores earlier this week.

Steeped in a tasty mix of roots rock and Americana, the collection of 10 original songs has been a long time coming, due to a variety of reasons, according to Wickersham, who plays San Francisco tonight and tomorrow [Thu/3 and Fri/4], opening for Chuck Ragan at Slim’s and the Great American Music Hall.

“I worked on it really sporadically over the past couple of years — Social D was very busy after we put out Hard Times and Nursery Rhymes, and we were constantly on the road for two and a half years. On breaks in between tour runs I’d go in the studio and work on it a little bit. It’s actually been finished for over a year, aside from the artwork, and this is a pretty good time to put it out because Social D has been on a break for while,” says Wickersham over the phone from his home in Los Angeles.

Although he grew up in the outhern California punk scene, and has played with some of the luminaries of the genre, Wickersham says there has always been a thread of other, older influences running through his music.

“As far as the influences I had growing up over the years, most of it comes from two places, the first being the music I heard growing up at home; my father was a musician, and he basically raised me by playing in bar bands, so the music that I heard spanned rock n’ roll, funk and country.”

“When I got into punk rock, which was around 1980, at the same time I was discovering Stiff Little Fingers, The Clash, and then California bands like Black Flag and The Adolescents, I was discovering The Blasters and X — that part of the L.A. punk scene was sort of rockabilly, and the Americana part of that scene. To me, that was part of punk rock, it wasn’t separate,” says Wickersham.

“I’m not a purist — there are a lot of people who are rockabilly purists or they’re country music purists, I’ve never been a purist about any type of music that I like, I stumble across what I stumble across, and I have sounds I like.”

Much of the record is built around Wickersham’s acoustic guitar, with a wide variety of friends and guests adding their talents to different songs, including Jackson Browne, Pete Thomas (longtime drummer for Elvis Costello), singer Gaby Moreno, and his Social Distortion band mates Brent Harding, Danny McGough and David Hidalgo, Jr.

“I didn’t initially want to go ‘solo,’ and be the ‘solo artist’ guy, coming from my background, for some reason that was so uncomfortable. The intention was to start a band that I can be the songwriter of as a vehicle to do my stuff, the way I want,” says Wickersham.

“There were just so many players that ended being involved, though, so I thought, well this isn’t a band, this really is a solo record, with a bunch of guest artists.”

The extra touches brought by his friends, such as shared vocals, accordion, and guitar solos all add to the great overall sound of the album, but the real strength of the record is the solid foundation of the songs themselves, all written solely by Wickersham with the exception of just a couple.

With catchy hooks and strongly emotive melodies paired with frank lyrics about his hard-lived past such as “I’ve got one foot in the gutter, and one foot kickin’ in the door to heaven,” the collection of songs was written over the course of many years.

Wickersham says getting to this point as a songsmith has taken a lot of hard work — but he’s had a lot of inspiration along the way as well.

“I was just learning how to write songs in the early days of the Cadillac Tramps, and Brian Coakely, who played guitar along with me in that band, is a great songwriter, he’s always been really prolific, and he works really hard at it. He really was the first person that I had ever met in my life that took the craft of songwriting as seriously as he did. When you’re coming up in punk bands—everybody wrote their own songs and stuff—but it wasn’t viewed as ‘I’m a songwriter,’ you know what I mean?” Wickersham laughs.

“Then I played with Youth Brigade, and did a record with them, one that I’m very proud to be part of, but again, Shawn [Stern] wrote the bulk of that stuff, as he should, it’s Youth Brigade—it’s Shawn, Mark and Adam’s band.”

Wickersham also played with Duane Peters and U.S. Bombs for a while before joining Social Distortion in 2000 after the death of his friend Dennis Danell, and has since co-written several songs with front man Mike Ness.

“When I started playing with Social D, and for Mike [Ness] to ask me to be part of the songwriting was just an amazing honor; he hadn’t written with anybody in the band aside from some stuff he did with John Mauer in the early 90s and the very, very early stuff that he and Dennis wrote together,” says Wickersham.

“With each one of those I learned a little bit more about songwriting and what it was I wanted to do as a songwriter. So it’s been a long time coming — I guess I’m just kind of a slow learner!”

Although he took everything that he learned from writing in all the bands he’s played with over the years, Wickersham wanted to make sure that he set himself apart from them at the same time.

“I didn’t want it to sound like any other band I have been in, but with me singing, that was a really intentional thing. One of the things about this record that was kind of freaking me out a little bit while we were making it was that it just didn’t seem natural to make it have a lot of big guitar on it, it just wasn’t working. I kept trying to get that guitar foundation, that bedrock that I’m so used to doing. So most of the songs ended up having an acoustic rhythm, and a different style of electric rhythm.”

Wickersham says that when he was still planning on having the project turn into an actual band, he spent a lot of time trying to come up with a name for the group—a task that he says was much more daunting that he thought it would be.

“Everything cool that I could come up with had been taken. No one will ever get to find a cool band name like The Pretenders or The Jam again, some simple, one-word bitchin’ thing. Now I understand why so many of these young kids are forming bands with names that are like a paragraph long,” Wickersham laughs.

Eventually the name that came to him was Salvation Town, which was the name of a song by his friend’s band Joyride, a title that Wickersham says spoke to him about growing up in Southern California, the punk scene, skateboarding and more.

The “Two Bags” moniker has stuck with him for many years, and Wickersham says there were several reasons that the nickname was given to him back in the old days.

“I was very young when they gave me that nickname, it’s almost like a lifetime ago. It’s kind of a threefold thing; it’s a take on the old Slickers tune ‘Johnny Too Bad,’ and then had to do with drugs, and back then, so many of us kids in that world ended up living out on the street.”

Wickersham has come a long way since his turbulent youth, and Salvation Town appears to be the start of a fruitful path for the 45 year-old guitar slinger, who is most pleased with the results.

“I’m super proud, I couldn’t be happier with the way it turned out.”