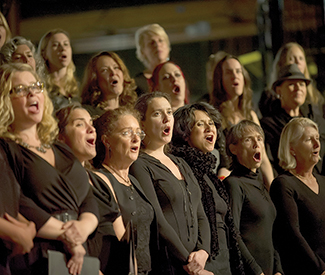 Mark Growden had a passion for jazz and classical music from a young age, growing up in the small northeast California mountain town of Westwood. So he set out to be a composer. He only learned to sing as an adult — out of necessity, when his instruments were stolen — and only then did his rich baritone vocals become a way to book gigs and get his music heard.

Now he’s teaching others to sing — often, amateurs who have never sung before — and writing original songs for them to perform. His Calling All Choir, now in its second season, is a 150-person choir made up of singers who, for the most part, have never taken the stage before in their lives.

Growden has always found inspiration in unexpected places. His take on American roots music blends his love of jazz with influences as varied as Appalachian folk, cabaret, and prison work songs from the old South. He started out composing for local dance companies, mainly on saxophone, before learning to play more folk-oriented instruments such as banjo and accordion. He’s spent the last 20-some years nomadically touring the country as a one-man band and in ensembles. In between shows, he’d stick around a city long enough to hold a singing workshop, which was as much about technique as it was about playful exercises that opened people up to music. Soon, Growden was known for both his songwriting and teaching abilities.

“The people in SF [in particular] kept coming back to the workshop,” said Growden, now an Oakland resident. “They asked ‘why do we have to stop for two months while you go on tour?’ I had it in my mind that I had to be on the road to make money.”

In September of last year, having just moved back to Oakland to settle down, Growden told his San Francisco workshop members, “Let’s try it.” He studied the community choir model, in which members pay dues to compensate the director, and started designing a program around his original compositions. He knew from the beginning that there would be no auditions; to reinforce its inclusive nature, he called it The Calling All Choir.

Growden spread the word online and through his previous workshop attendees, forming chapters in Sonoma and the East Bay, in addition to San Francisco. He set the dues on a sliding scale, ranging from $0 to $500 per person for the 18-week season. The inaugural season last year kicked off with about 40 members in each location. The three groups rehearsed separately — once a week for two hours a night — before coming together in January for dress rehearsals and final performances at The Sebastopol Center for the Arts and The Crucible in Oakland. The choir also performs at local hospitals and retirement homes.

First season member Gianna Smart had never heard Growden’s music before joining, but it ended up being part of the appeal.

“I imagined I’d find a Christmas choir in a church basement somewhere, and was okay with that, but when I met Mark and discovered that he wrote all of his own original compositions, I was really excited,” said Smart, who lives in Healdsburg. “The choir is a safe place to explore your own voice and be a part of a bigger sound. You don’t have to hit all the notes because you’re supported — someone always has your back.”

The second season is already five weeks under way, with 150 members. They’re set to perform four compositions by Growden in the coming weeks, plus a 1936 cantata by Ralph Vaughan Williams called “Dona nobis pacem.”

“It’s a classic round that the older generations know,” Growden said. “It’s important to keep those rounds alive in our culture.” So how do amateurs go from zero experience to singing in Latin? Growden said it usually comes down to practice: “There were people who couldn’t match pitch, but I kept having them come in early to work with them one-on-one or with a buddy,” he said. “People who I thought absolutely couldn’t sing, end up being able to sing.”

During a recent rehearsal, his patience seemed endless and his energy infectious. When the choir formed a circle grouped by vocal ranges — sopranos, altos, tenors, and basses — Growden sprinted from section to section, signaling with his arms and voice when and how to sing. He encouraged them “to lean” into their next notes, reminded them not to bury their heads in their black binders filled with sheet music, and even stopped them when they sounded flat. Sure, there were a few off-key, cringe-worthy moments.

But there was also something beautiful in those imperfections. “I don’t like to use the word spiritual – it’s way overused – but there is something sacred in people singing together. Even if they’re just drinking together,” Growden said later by phone.

Each rehearsal begins with vocal exercises, many of which Growden borrowed from theater, and usually some form of dancing to encourage people to use their entire body as an instrument. The rehearsals also end with a dance party, for which Growden lowers the lights and blasts everything from hip-hop to ABBA. For the rehearsal he let us sit in on, it happened to be James Brown.

The second season will culminate with a finale June 20, at a venue TBD, and the third season will begin in September 2014. The choir accepts members within the first three weeks of the season, though Growden said he makes exceptions for experienced singers who know how to read music.

“When you’re writing for amateurs, it’s harder. I’ve got to set them up for success,” he said. “But as a composer, I am really lucky. Vivaldi was a music teacher at an all-girls orphanage, Duke Ellington had his band…I mean, do you know how hard it is for composers to have their music made?”