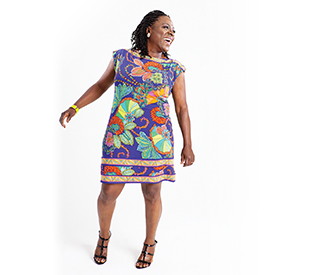 Sharon Jones lacks virtually every quality that the entertainment business seeks in a singer. But she has two that matter the most: an indomitable will and God-given talent. The former has served the 57-year-old soul singer well, and became all the more necessary when, poised to embark on the most important year of her career, she was diagnosed with stage II pancreatic cancer. The year 2013 became one of tragedy instead of triumph: Her mother, also stricken with cancer, passed away in March. Jones’s own diagnosis and treatment was wearing her down physically and emotionally. And nearly a year of work lined up for her and her band The Dap-Kings, in support of their new record Give the People What They Want, was abruptly wiped out.

Then, in 2014, she roared back. Her health has returned, an announcement he made gleefully on January 24 via Facebook: “I just got the best news in my life! I AM CANCER FREE!”

Now she and The Dap-Kings are set to perform three nights at the Fillmore, from March 27 through 29, a mini-residency that few artists outside of Willie Nelson and Railroad Earth receive at the historic venue.

Three consecutive performances might seem like a heavy load for someone who didn’t know whether or not she still had cancer when the dates were booked, but Jones was already performing in between chemotherapy treatments — like at the Macy’s Thanksgiving Day Parade last year. Nine days after her final treatment on New Year’s Eve, she was on The Tonight Show Starring Jimmy Fallon, performing with The Roots. By the time she found out she was cancer-free, she had already played on Ellen, Conan, The Tonight Show with Jay Leno, and made a handful of other TV and radio appearances.

“I’m adjusting,” Jones says of her return to music during a recent phone interview. “The day before yesterday I did some stretching, walked on the treadmill for the first time for about 40 minutes. I feel my strength. Every night it’s better — I’m a little stiffer, but I’m getting used to it. Still goin’ from party to party.”

Performing without a wig, she has not concealed the consequences of her treatment, though her hair is returning. “It’s coming in silver,” she explains. “It will go well with that silver sparkly dress,” the one she favors on stage.

For Jones, whose career never gained traction until she was in her late 40s, it is never too late. Hers is a story of a lifetime of hard work that is finally rewarded and fully earned. An undercurrent of populism exists throughout her music and it is more relevant now than ever, particularly in the city, where dialogue about the displacement of the working class or income inequality is inescapable. Sometimes it is plainly stated, as in the song “People Don’t Get What They Deserve.”

Nevertheless, the band disputes that it has a message. “We’re not a band with an agenda or a political band,” says Gabriel Roth, holder of a crowded business card: Daptone Records co-founder, Dap-Kings bandleader (stage name Bosco Mann), songwriter, and producer. “We’re trying to make shit that makes people feel good. For me, it’s rewarding to get on the road and see that that pays off, that people not only respect that, react to that, but are loyal to that. When we stay true to ourselves and our music, the fans stay true to us. So I think in that way, there’s a populist undercurrent to everything we do.”

Sometimes, politics find them. Jones had health insurance when doctors surgically removed her gall bladder, a foot and a half of her small intestine, and reconnected her bile duct to her stomach to treat her cancer. The co-pay for her subsequently prescribed medications was a modest $35, until the day her pharmacy forgot to enter her insurance information.

“They gave me a bill for over $500,” Jones recalls. “I thought, ‘Are you fuckin’ crazy? How the hell am I supposed to pay for this throughout my treatment? What am I supposed to do now? Die?’ It’s ridiculous!”

Fired up about the topic, Jones sympathizes with those in her situation without insurance “while these pharmaceutical companies are making billions. I’m thinking about how I’ve traveled, gone to Europe, Australia, and they don’t pay like that.”

As recently as 2008, Jones would return from touring abroad to a home she shared with her mother in New York City housing projects, sometimes needing assistance from church to get by. Before her career in music gained traction, she worked a variety of jobs, including as a prison guard, and occasionally carried a pistol in her fanny pack for protection in the neighborhoods she navigated.

She met Roth in 1996, while he was recording soul man Lee Fields. “I needed a background singer and the sax player that worked with us said, ‘Oh, my girlfriend can come in,'” Roth says. “When she did, I told her I needed three singers and she said, ‘I can do all three parts.’ She sounded so good we brought her in for other work.”

Jones’s story isn’t atypical at Daptone, where careers, such as Fields’, are revitalized — or given a shot they never had. Charles Bradley, who installed the plumbing at Daptone studios before recording there, is finally being recognized well into his 60s.

In addition to the aesthetic of the 1960s and ’70s soul singers, Roth uses recording equipment from that period. He’s not alone in his approach — Daft Punk and Pretty Lights made no secret of their use of tape to record their 2013 Grammy-winning or nominated albums.

“To be honest, I think a lot of it is bullshit,” Roth says. “I don’t think it matters that much, sound-wise. For me, it’s a question of process: When you go into the studio to make a record, you want the musicians, the songwriters, and the arrangers to be on their A-game.” Tape limits the number of available takes, he says, and the pressure is on to get it right. “When you record [digitally] and you have an infinite amount of isolations, tracks, takes, and that much control over each note you’re not really committing to anything. It changes the process. In that way it really changes the music.”

For now, the band can once again focus on the music. They’re eager to bring the show to the city and to stay in the same place for three nights, a luxury on the road. Drummer Homer Steinweiss will get more material for his foodie blog. And the audiences here have treated the band well in the past.

“They tend to be less impressed in LA, New York, or Chicago, because there’s so much music there,” Roth says. “But San Francisco, even with the amount of entertainment, culture, and excitement there is there, the crowd really seems to come to have a good time.”