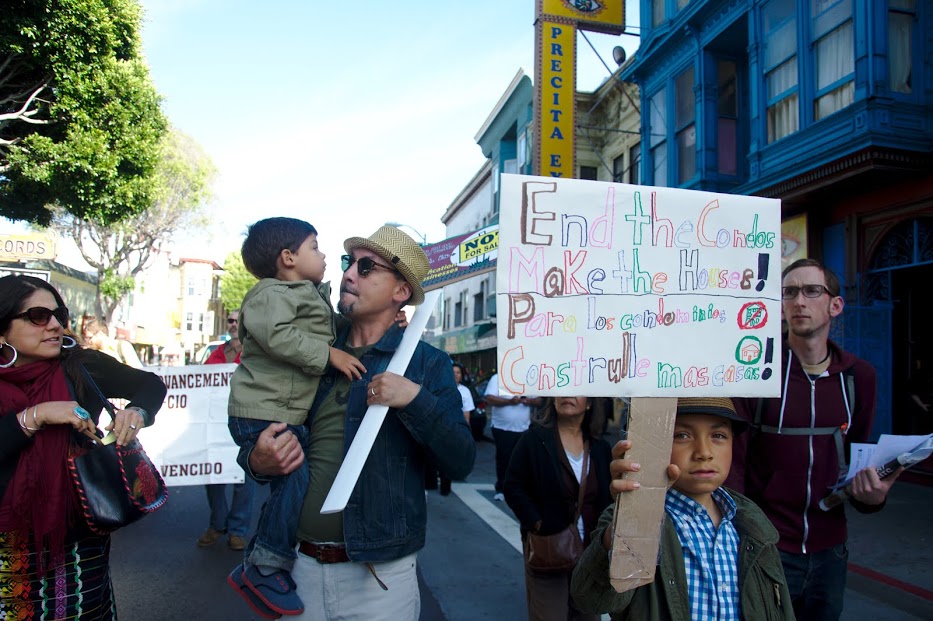 San Franciscans love tech, they’re totally cool with the Google buses, and care more about job creation than the cost of living, according to a newly released poll of San Franciscans by the Bay Area Council.

But though the poll asked respondents these questions in English and Cantonese, the pollsters left out one pretty important group of people in this debate: Spanish speakers. Yes, a poll about tech buses and the tech industry, and tangentially gentrification — which is now hitting the Mission District hard — failed to ask Spanish speaking voters any questions in their native tongue.

“Considering the tech industry’s impact on the Mission district, that’s a little suspcious,” Cynthia Crews, of the League of Pissed Off Voters told us. That’s an understatement. The “Our Mission: No Eviction” protest last October turned out hundreds of Mission residents, many Latino, against the gentrification of the neighborhood (and the lax regulations of the Google buses). The first Google bus protest took place on 24th and Valencia, in the Mission district.

Assemblyman Tom Ammiano said it was especially important to include Spanish-speaking voters. “San Francisco is a very multicultural city,” he said. “Even if the [polling] results were the same,” by polling Spanish speakers, “it would be a truer picture.”

The San Francisco Municipal Transportation Agency announced a pilot program to study the use of commuter shuttles, including tech buses (known commonly as Google buses), but also shuttles from hospitals and universities. The pilot program came to a halt when a coalition of advocates filed an appeal of the pilot program under the California Environmental Quality Act, known as CEQA. Those concerns will be heard at City Hall next Tuesday. The shuttles impacted Latino populations in the Mission particularly hard, leading advocates to say question why their voices were not heard in the poll.

Rufus Jeffris, a spokesperson for the Bay Area Council, who commissioned the poll, told us they just wanted answers on how to move the conversation around tech forward. “Clearly we’re in a time of economic growth, but we want to make sure we’re focused ont he right solutions,” he said.

And the number of Spanish-speaking likely voters was not significant enough to warrant the expense of including them in that conversation, Jeffris told us.

The poll said San Francisco voters’ opinions differed from news coverage of the shuttles: “Despite what it may look like from recent media coverage, a majority of voters have a positive opinion of the shuttle buses and support allowing buses to use Muni stops.”

Of course you’ll find a lot of voters in favor of the Google buses if you fail to interview a major voting bloc of the city that actually lives near them. Latinos make up 15 percent of the city’s population, according to 2012 US Census data. But Jeffris said that may not matter.

“The universe of likely voters does not always mirror [the population],” he said. “Not everyone in the city’s population votes.” Ruth Bernstein, a principal of EMC Research, the pollsters, said the Cantonese speakers usually comprise 9 percent of likely voters.

The poll found that “Tech workers are viewed unfavorably by only a minority.” Just 17 percent of respondents were unfavorable of the tech industry to some degree, while 70 percent were favorable in some fashion.

An excerpt from the poll saying most San Franciscans view Google buses favorably.

But the methodology of the poll may have been flawed regardless of who they talked to. Bernstein told the Guardian that the questions were crafted in sessions between the EMC Research and the Bay Area Council.

“We did a draft,” she said, “and then worked with the Bay Area Council until they were satisfied with what we did.”

The Bay Area Council is a noted pro-business organization, casting a particular narrative behind the questions it asks. Notably, it didn’t ask about the shuttles’ direct ties to displacement in neighborhoods. It did, however, ask many questions about the Google buses, or “shuttles.”

“All I can tell you is what we saw,” Berstein told us, of her company’s methodology. “There are certainly people not happy about [the shuttles]. The voters aren’t opposed to them, but they want regulations.”

SEIU Local 1021 Political Director Chris Daly was more plain spoken about the business interests behind this poll. “Well it looks like Jim Wunderman seeking a paycheck!” Daly said, referring to the Bay Area Council’s CEO and President. “Get the nice folks at EMC to do a poll for you, probably costs you close to 20 grand. They’ll get a good day of press out of it tomorrow.”

But even if the poll turned out to be the same, or similar, if it included voices of Spanish speakers, Daly said it still wouldn’t get to the heart of the issue.

“Even if the public does like tech shuttles, it has no bearing on the CEQA hearing Tuesday to determine if the City followed categorical law on this ridiculous policy,” he said. “They claim [the shuttles have] no significant environmental impact. “When it comes to displacement, when it comes to air quality and cancer rates, clearly these things are having a huge impact on San Francisco’s environment.”

The tech workers get to ditch their cars, and the low-income workers will be forced to drive. Sounds just about as equitable as this poll.

If you’d like to see the poll for yourself, we’ve embedded the slides showing the results below.