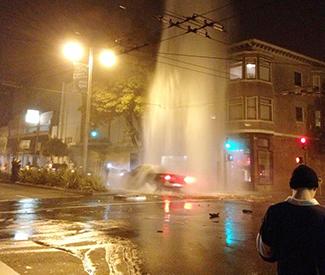 Controversial tech-ride provider Uber will now expand its insurance for drivers, it announced on its blog today.

Transportation Network Companies, more commonly known as “rideshares,” have operated in legal limbo regarding their insurance since their creation. This came to a head on New Year’s Eve with the death of six-year-old Sofia Liu, who was killed in a collision with an Uber car driven by a man named Syed Muzzafar. Uber claimed in a blog post that because Muzzafar was not ferrying a passenger at the time, and only using the app to search for fares, that he was not officially covered by their insurance.

It was an insurance gap that left the driver on the hook for the death of a little girl and the injuries of her family. San Francisco Municipal Transit Agency Taxi Director Christiane Hayashi estimated the lawsuit to be at around $20 million, based on her experience. No amount has been specified by either party as of yet, but so far Uber has not compensated the family for Liu’s death.

Now it seems there’s a glimmer of hope that future collisions may be covered.

As Uber wrote on their blog today:

“In order to fully address any ambiguity or uncertainty around insurance coverage for ridesharing services, Uber is becoming the first and only company to have a policy in place that expands the insurance of ridesharing drivers to cover any potential ‘insurance gap’ for accidents that occur while drivers are not providing transportation service for hire but are logged onto the Uber network and available to accept a ride.”

But Sofia Liu’s family is still out of luck, apparently.

The blog specifies that the money will not kick in if a driver’s personal insurance covers a collision, and that seems to be the case with the New Year’s Eve incident.

In an interview with the San Francisco Chronicle, Uber CEO and co-founder Travis Kalanick said that the Syed Muzzafar’s personal insurance policy had offered to pay the claim, but had not yet followed through.

When we contacted Uber’s spokesperson, Andrew Noyes, to offer proof of this, he declined.

Uber has also promised insurance coverage before, in the form of their $1 million policy. But still many pedestrians and passengers have filed suit with the company when Uber declined to pay for their medical coverage, like Claire Fahrbach, a woman who was walking down Divisadero when an Uber car hit a fire hydrant, sending it flying into her. Her injuries were substantial, and she quit her two jobs. She immediately left San Francisco to live with her parents for financial and medical support. Her hospital bills are steep, and she is currently tangled in a lawsuit with Uber.

When we asked Noyes if the new policy agreements would allow Uber to pay out insurance to the many injured passengers and pedestrians suing Uber for coverage, Noyes would only speak off the record. But in case you’re wondering, it all basically amounted to “no comment.”

Uber’s lack of coverage extends well beyond Fahrbach and her injuries, with drivers nationally left uninsured to various degrees. Popular car insurance provider Esurance wrote about it on its blog shortly after Valentine’s day:

“Though TNCs are now required to carry $1 million in liability insurance, this coverage is designed to protect riders and pedestrians and pay for damages to other vehicles. The policy doesn’t have to cover the driver’s car or the driver’s injuries (and it doesn’t kick in at all unless the TNC driver is found at fault). And because of the livery exclusion, the driver’s standard personal insurance likely won’t cover accidents either. So, instead of adding to their income, the TNC driver could be left holding the bag.

Though we can’t speak for all insurance companies, the livery exclusion is pretty universal. According to our definitions of coverage, TNC drivers would need commercial insurance since a personal auto policy through Esurance doesn’t cover both personal and commercial use of a vehicle. In all states except California, we’re unable to offer a standard policy to TNC drivers. And in California, the driver’s standard coverage doesn’t apply during a ride-share trip.

If you’re driving for a TNC, the California Department of Insurance urges you to contact your insurance company and see if there are gaps in your coverage that are putting you at risk. You might be better off with a commercial policy. (Esurance doesn’t offer commercial auto insurance, but you can get it through our partner.) Since Lyft is already available in 20 cities (and UberX in dozens), this is good advice no matter where you live.”

So Esurance’s personal policy does not cover an Uber driver, and other insurance companies have stated on the record at KQED and other outlets that they won’t cover personal or commercial insurance for a TNC driver (like Uber).

But for now, commercial and personal insurance policies rarely, if ever, cover TNC drivers. And Uber’s new insurance? It’s great, as long as Uber follows through.