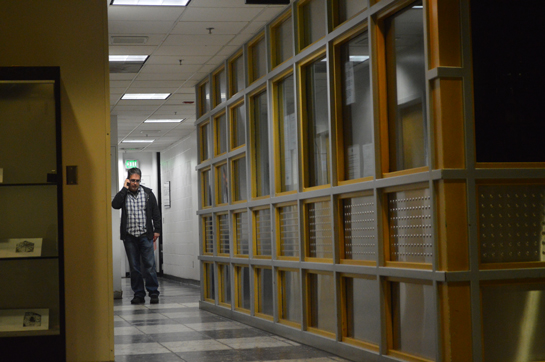 Two City College student protesters, Otto Pippenger, 20, and Dimitrious Philliou, 21, were released from county jail this morning following a City College protest yesterday which became suddenly violent. But new details emerging from the protest raise concerns about City College administrators and their behavior towards the protesters.

The students made it out this morning (Fri/14), before sunrise. Philliou was issued a citation and released shortly after 2am, and Pippenger made bail and was released at 6am, according to the San Francisco Sheriff’s Department.

The clash came after a peaceful protest began at City College’s main campus, in an open space designated by college officials as a “free speech zone.” Nearby was an administrative office building, Conlan Hall, where students also register for classes. When the students tried to enter this public building they were met by resistance from campus police and SFPD.

Pippenger, who was at the front of the protest, was dragged to the ground by multiple officers and allegedly punched in the head by SFPD, which can be seen on multiple videos from the incident and recalled in eyewitness accounts.

Video shows police throwing a punch towards Pippenger at just past the 1 minute mark. Though the video does not show Pippenger, witnesses have confirmed the punch landed on the back of his head, knocking his forehead to the concrete.

Afterwards he was carried into Conlan Hall and up the stairs. This is where the video stops, but one eyewitness was upstairs to see what happened next, and her allegations are troubling.

“I saw the police dragging him upstairs in front of my office,” Karen Saginor, an ex-Academic Senate President and current City College librarian, told the Bay Guardian. “They asked me to close my door, and I didn’t. [Pippenger] asked me to call his mother. But [Vice Chancellor] Faye Naples said ‘don’t make that call, it’ll make things worse.’ I didn’t listen. I pulled out my cell phone and called his mother.”

The officers then took Pippenger into one of the administrator’s offices at Naples’ request.

“His glasses were damaged and he was missing a shoe. It was all surreal,” Saginor said.

The Guardian left a message with Naples’ office, but had not heard back before press time.

In the end, Philliou was charged with misdemeanor ‘returning to school,’ which was described as trespassing by the Sheriff’s Department. Pippenger was charged with two misdemeanors: resisting arrest and battery on emergency personnel, with bail set at $23,000.

Pippenger will face arraignment Wednesday, he told the Guardian.

The college’s faculty union, AFT 2121, raised an unspecified amount of money towards bail on his behalf. AFT 2121 President Alisa Messer said it was the “right thing to do.” But even with his bail posted by 10:30pm, Pippenger had a long time to wait.

“Every half hour they slammed the night stick on the wall, and they moved me until the sun came up,” he said.

David Pippenger and Heidi Alletzhauser, his parents, tried to retrieve him from county jail shortly after his bail was posted. Alletzhauser sat against the wall in the lobby, stoic, as David Pippenger asked the Sheriff’s Department again and again why his son was being held despite posting bail.

At one point he was able to reach his son on the phone. “Stay calm, keep cool,” he told him, as his son chafed against his jailors.

Sheriff’s Department spokesperson Kathy Gorwood told the Guardian he was held because his background check hadn’t cleared until 5:30am. He was released shortly after.

The elder Pippenger expressed frustration the peaceful protest was met with such forceful resistance. “It’s disappointing,” he said. “It didn’t have to escalate into that.”

Otto’s mother recalled seeing the video of her son held by police and punched in the back of the head, which protesters at City College showed her shortly after her son was taken into custody. “There seemed to be no procedure,” she said. “I was so upset.”

Shortly after the protest, City College Chancellor Arthur Q. Tyler spoke to a crowd of faculty and students at the school’s Chinatown campus. The meeting was about the educational master plan for the school, but talk quickly turned to the protest.

“I know the police chief had to respond for safety and security reasons,” he said. When questioned on the existence of “free speech zones,” he said “we will have a discussion in the future about expanding the area for civil discourse.”

“People have free speech rights, and I support that, but I’m not the reason he is in jail,”  he told the Guardian.

Saginor, who was nearby, said to Tyler “I hope you’ll not go home and get a good night sleep while a student is in jail?” When we asked if he would visit Pippenger as a gesture of goodwill while in custody Tyler simply replied “No, I’m not.”

Pippenger attended the rally for extra credit points in his Labor Studies class, he said. He’s taking four classes at City College right now, and is an intern at the AFT 2121, the school’s faculty union.

The protest was a call for the resignation of the school’s state-appointed special trustee, Dr. Robert Agrella. The changes Agrella is making at City College in the name of saving it are controversial at the school, which many view as narrowing its mission to focus younger students seeking to transfer to four year schools.

Left out are those seeking vocations, those seeking short term skills like learning a language or a piece of computer software, and older students who struggle to complete college on time. Their class choices are narrowing and statewide their opportunities for education are dwindling.

About ten protesters spent the night in Conlan Hall, the site of the protest, and peacefully departed in the morning. Their protest will continue today at City Hall. Supervisor David Campos is holding a hearing afterwards on the restoration of the elected City College board of trustees. He also was at the protest.

#CCSF students supporting those inside the admin building. pic.twitter.com/49kj2v6HYa

“What I understood was that students outside simply wanted to go in there and peacefully demonstrate,” he said. “How this was handled show there is a real disconnect between the administration and student body.”

As for Pippenger, he’ll be at the demonstration at City Hall as well. He said he’s proud to defend City College’s mission to serve not just transfer students, but all students.

That’s why he fights. “You see a lot of people turn their lives around.”

A rally to remove Special Trustee Dr. Robert Agrella and reinstate the elected board of trustees was slated to begin today at City Hall at 12:30pm. A special hearing on the matter called for by Supervisor David Campos is scheduled shortly after.