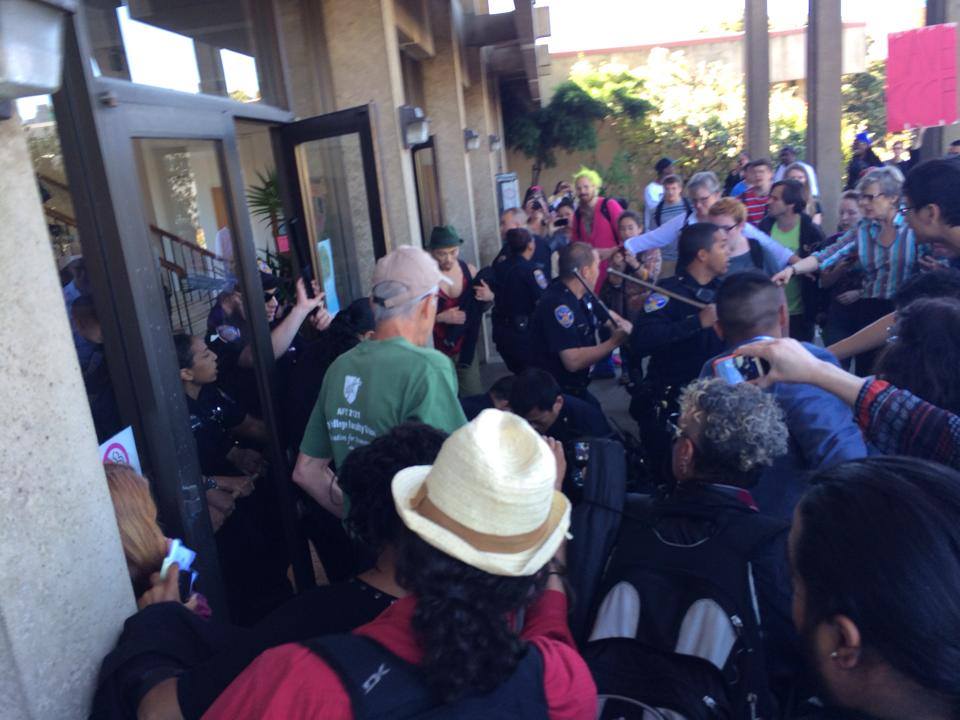 [Update Friday, 1:32pm: The Guardian published an updated post on the status of the two detained student protesters, who were later released, here: http://www.sfbg.com/politics/2014/03/14/two-detained-city-college-student-protesters-released-amidst-troubling-allegatio]

One student protester was pepper sprayed, and others hit with batons, tackled, and arrested today at the City College of San Francisco’s main campus. Over 200 students were demanding the resignation of Special Trustee Robert Agrella, tasked by the state authorities with saving the college, usurping the authority of its locally elected Board of Trustees.

[Update 8:20pm: The Sheriff’s Department confirmed two students are in custody, but could not confirm if SFPD or City College police made the arrest. Witnesses confirmed that the first student, Otto Pippenger, was pulled down to the pavement by multiple officers. While he was on his stomach an officer punched him in the back of head, slamming his forehead into the concrete, according to the account of Alex Emslie, a reporter on the scene. The second student, Dimitrios Philliou, was driven away in an ambulance.]

“Some students were pepper sprayed, some were clubbed,” City College Student Trustee Shanell Williams told the Guardian. “This is unacceptable, and really fucked up.”

City College faculty and union president Alisa Messer told us there are now over a dozen students in Conlan Hall, the administrative building in City College’s main campus, which also houses Argella’s office. The students intend on camping all night if they have to, they said.

There are also students outside the public building who are giving support, Messer told us, adding that the situation got out of hand quickly.

“It got pretty rough, pretty quick. Students pushed their way into Conlan Hall and police were quick to get their sticks out. I was pushed around,” she said. “I think this is clearly one of those situations where police presence escalated, rather than de-escalated the situation”

The SFPD declined to comment on the incident, saying the matter was in the jurisdiction of the CCSF Police Department, who are sworn officers. The City College police haven’t yet returned our calls, but we’ll update this post if and when they do. It is also unclear which police pepper sprayed students: the City College police, or SFPD cops providing mutual aid.

The Sheriff’s Department said it did not have the students in custody, yet. “We don’t have these gentlemen in our custody,” said SFSD spokesperson Kathy Gorwood. [UPDATE 5:45pm: Gorwood confirmed that one student, Otto Pippenger, was booked shortly after 4:30pm on two misdemeanor charges: resisting arrest and battery on emergency personnel, with bail set at $23,000, after he was examined by a nurse and found to not need medical treatment. Gorwood said Philliou had not been booked.]

A student shortly after the incident recalls what happened.

In the midst of the conflict stands Agrella, a controversial figure in the City College community. Some students and faculty from the Save CCSF Coalition and American Federation of Teachers Local 2121 say that the special trustee is heeding the whims of the accreditors and ceding the fight for local control. The accreditors’ decision was wrong about City College, they say, and based on fiscal matters over educational ones.

He does, however, hold “meetings” in the form of email. He solicits emails from the community, which he deems “public comment.” This is farcical to some, leading Sup. David Campos to call for a hearing tomorrow at City Hall to look into restoring the Board of Trustees.

[UPDATE 5:20pm: Save CCSF Coalition has issued the following statement:

Thirty City College of San Francisco students have entered the administration building at the Ocean Campus and are holding a sit-in to protest the lack of democracy at the college and the new student payment policy.

The students are demanding that the Special Trustee With Extraordinary Powers (STWEP), Robert Agrella, step down. Ever since the democratically elected Board of Trustees were stripped of their powers students, faculty and staff have endured a series of destructive decisions and policies. One such policy the students are demanding be reversed is the aggressive payment policy that has forced many students out of school.

Itzel Calvo, an documented student, said, “I was not able to enroll in classes this semester unless I paid thousands of dollars in tuition up front, even before the classes started. I can’t afford that.”

Lalo Gonzalez, a student senator, said, “The reign of this STWEP has been disastrous. Classes were cut that students needed and the diversity departments are in danger.”

Police denied students entry to the building and after a skirmish at the doors of Conlan Administration Building, 30 students entered. One student was pepper sprayed and taken by ambulance to the hospital.

They intend to continue their sit-in until the STWEP leaves and the payment policy is reversed.]

[UPDATE 6:17pm: After City College student Otto Pippenger was arrested and booked following a protest at the college’s main campus, the faculty union and Pippenger’s mother scrambled to help.

His mother, Heidi Alletzhauser, told the Guardian “Otto’s is in jail, so of course I am upset. I do not know the full extent of what transpired but it appeared the situation escalated very quickly, and perhaps those involved were operating at a fight-or-flight level. I am worried about my son and the other boy who was arrested, and what this means for their futures.”

She said she was not able to get Pippenger out of detention tonight, but was told if she brought him to a judge tomorrow he may possibly be released on his own recognizance.

In the meantime, City College’s faculty union, the AFT 2121, was busy making phone calls to see if they could raise money for Pippenger’s release, if needed.

“Two were arrested,” CCSF Chief of Police Andre Barnes told us. He could not confirm if the second student, Dimitrious Philliou, was in General Hospital.

Reporter Joe Fitzgerald Rodriguez is currently at a City College planning meeting waiting to speak to Chancellor Arthur Q. Tyler. We will update this post as more information is obtained.]

The police are here in force for the CCSF planning meeting. pic.twitter.com/MOGnuT2heg