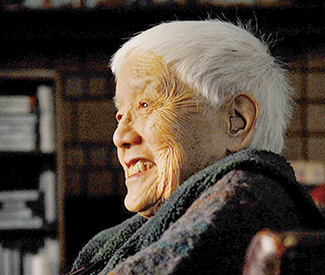 CAAMFEST A beautiful butch moviemaker with a penchant for Peking opera divas. A dogged indie documentarian willing to stalk her prey, be it politically radical or the hard-partying dead. These are but a few of the unusual suspects caught in the viewfinders of CAAMFest 2014‘s Asian and Asian American female directors.

Is there a way to knit together their concerns, essentialize their imagery, and boil down their movies to something beyond stereotype and cliché? It would take a revolution in imagination, underlined by a political charge and peopled by well-defined personalities pushed to the margins. Their few numbers on a larger directorial stage dominated by white men throws their strong subject matter into sharp relief.

You can feel it in even the shortest of documentaries, like the 26-minute festival-closing documentary Delano Manongs, by Emmy-winning Berkeley moviemaker Marissa Aroy, who gives Filipino bachelor farmworkers and organizer Larry Itliong their due in the formation of the United Farm Workers union. Or in films that span more than a half a decade of interviews, such as American Revolutionary: The Evolution of Grace Lee Boggs, even when LA director Grace Lee quips in a voice-over aside that while interviewing Detroit activist and citizen intellectual Boggs, she’s not immune from “going back and forth with her on Skype trying to understand what she’s talking about.” (More on that film below.) What gets lost in translation? These directors, more often than not, foreground their attempts to read between the lines and penetrate a fog of forgetfulness and counter-histories in order to get to a few truths, subjective and otherwise.

Such is the case of Hong Kong documentarian S. Louisa Wei, who unearths the once-dumpster-relegated tale of SF Chinatown-born-and-bred Esther Eng, the first Chinese American woman director, in Golden Gate Girls — with rich, mixed results. Now little-known due to the loss of many of the 10 Cantonese-language features she made in the US with producer Joseph Sunn Jue (whose Grandview Film Company gets its own CAAMFest tribute), among others, and Hong Kong during its first “golden age” of moviemaking, the inspiring, enterprising Eng appeared to take difference in stride. First, she was a producer of likely the first Cantonese-language film made in Hollywood (the 1936 nationalist melodrama Heartaches), and then the versatile director and writer of women-centered features starring her favored Peking opera performers. All the while, she lived as an out lesbian who liked to be called “Brother Ha,” wore suits and her hair styled in a boyish crop, and cohabitated with one of her leading ladies and “bosom friends” in 1930s Hong Kong on the brink of Japanese invasion.

Candid about her struggles and sidetracks in uncovering the facts of the director’s life, Wei interviews intimates, like Eng’s youngest sister Sally, cohorts who knew her as a trans-Pacific moviemaker and film distributor who hobnobbed with legendary figures like James Wong Howe, and finally as a popular NYC restaurateur. The documentary maker fills out the cultural context of Eng’s life, with lengthy, at times highly editable, comparisons to Hollywood counterpart Dorothy Arzner and Anna May Wong; riddles the movie with fascinating if weird factoids (the infant Bruce Lee, for example, made his first film appearance in Golden Gate Girls as a baby girl); and regretfully loads on some rather cheesy, cheap-looking digital animation. Still, the sheer interest of Eng’s lost history makes up for any shortcomings.

Wei and Brooklyn Filipina American director Esy Casey know the road to piecing together a documentary is rarely a direct one. Casey’s affectionate Jeepney takes its time over the course of 61 minutes to enjoy the vibrant colors and refracted lights in its ride into the world of the wildly imaginative, color-splashed, mural-and-tagline-spangled jeeps, once in service to World War II US armed forces, now souped-up cheap-fare city buses. The chaos of Manila street traffic, as well as Casey’s interviews with jeepney auto painters, craftspeople, drivers, policy makers, and passengers, as taxes rise and threaten to put customizers and drivers out of business, spur the question “where next?” and add up to a freewheeling and pungently poetic slice of urban Filipino life.

With American Revolutionary, Grace Lee goes deeper with one of the subjects of 2005’s The Grace Lee Project — her study of women who share her surprisingly common name — and plunges into an inspiring life. To say Boggs’ story could only happen in America is a grotesque understatement: Hers is an exceptional tale of American individualism working on behalf of those left behind by American exceptionalism.

Lee details her beginnings as that rare Asian American woman to earn her Ivy League doctorate in the ’30s, only to discover that she was barely employable due to her race and gender; the film then moves to Boggs’ organizing efforts in the African American community before and after the civil rights movement, her role as a grande dame in Black Power circles, and more recently as a community activist instrumental in founding the leadership-nurturing gardening and artmaking projects of Detroit Summer. Less grand but nonetheless revealing are the question ducks, the intellectual battle royales, and the moments when, say, Lee cuts Boggs’ hair in her kitchen. These instances — along with Lee’s highly entertaining 2007 mockumentary, American Zombie, also playing CAAMFest — reveal that Lee is also uniquely and, despite her protests to the contrary, compassionately, one of a kind. *