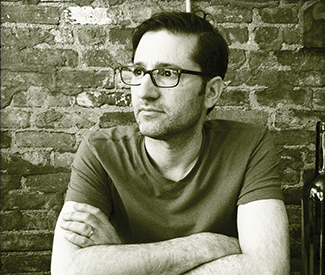 So begins the latest entry in the great, ongoing 33 1/3 book series from Bloomsbury Press, which unleashes one notable writer on one seminal album and prints the often-poetic results. In this case, the “extravagantly opaque, willfully vaporous” chillout room masterpieces of electronic composer Richard D. James, aka Aphex Twin — basically what everyone in the 1990s listened to as they swept up/came down after the rave — get the business from incisive SF writer and archivist Marc Weidenbaum. And really, the pairing couldn’t be any more delicious.

Since 1996, Weidenbaum’s been quietly documenting from the Richmond District all manner of experimental and electronic sounds on his incredible Disquiet.com site. (Some have referenced the site as one of the earliest blogs.) It’s one of our great sonic secrets: Pretty much once a day for the past 18 years he’s been opening ears to everything from random satellite-based sound sculptures and square wave coding antics to looped Sumerian myths and compressed Fugazi-discography experiments.

Named after mysterious early 20th century Portuguese poet Fernando Pessoa’s “factless autobiography” The Book of Disquiet, Disquiet.com itself had a disquieting beginning. “When I founded Disquiet, I had quit a job I’d had for seven years,” Weidenbaum told me by email. He’d started at Tower Record’s Pulse! Magazine as an editor, then went on to launch its classical magazine and found its first digital publication. “I’d joined Tower because I wanted to work for a magazine that covered all music, which back then was quite an unusual thing. But in time I realized that my seemingly disparate listening had a core thread: that which I first thought of as electronically mediated sound, but eventually I recognized as ‘technologically’ mediated sound.

And now he’s written a book channeling his feelings for the technological mediation that Aphex Twin brought to the fore. The tricky thing, of course, is that Aphex Twin — who’s recently reemerged to perform with and produce insane South African zef-rave act Die Antwoord — is known not just for ethereal, era-framing atmospheric ambience, but satanic electronic audiovisual combustions like “Windowlicker” and “Come to Daddy” as well.

“It’s difficult to name direct descendents of Aphex Twins’ work, because his is a difficult template to fill: that mix of conflicting sounds, both unnerving and soothing; a steady retreat from the public eye, despite obvious extrovert tendencies; moving from a hidden subculture to broad awareness. It’s hard to figure out what past figure he was himself a contemporary version of. But so many musicians bridge the worlds of club and art music these days” — Weidenbaum mentions SF-founded duo Matmos and local composer Mason Bates — “and part of the reason is because of the ground that Aphex Twin broke.”

Fitting therefore, that the release party at City Lights bookstore on March 20 will also be a showcase of contemporary electronic music. “I’ve run an online music-making group since the start of 2012, called the Disquiet Junto, and that’s put me in touch with a lot of musicians,” Weidenbaum said. “So I’ve been inviting musicians, many though not all from that association, to perform new, original works informed by the Aphex Twin record, and by my book’s take on the record. Specifically, they’ll be doing electronic work derived from the wind chime, which I single out as an early ‘generative’ instrument. I’ll read from my book, and they’ll play live. At City Lights it will be the incredibly talented Marielle Jakobsons, Jared Smith, and subnaught, all of whom live in the Bay Area.”

EXPLORING THEMES FROM APHEX TWIN WITH MARC WEIDENBAUM AND FRIENDS

Some smooth house from this UK rising star — his cute remix of AlunaGeorge’s “Best Be Believing” got him places — and a nice Thursday knees up with the Lights Down Low crew.

Revered Sao Paulo techno playboy is back to support protégé act Wish, shooting some sunny vibes all over our last winter weekend.

Ethereal UK bass master Martyn joins house hottie Midland and an insane home team lineup including Ghosts on Tape, Bells & Whistles, Kenneth Scott, and the whole As You Like It crew for a top-notch overload.

The first gay-themed movie I saw was 1976’s infamous The Ritz starring the unconquerable Rita Moreno as “Googie” — I grew up thinking all gay men hung out in kooky bathhouses making hilarious jokes and having hilarious sex. Thank goddess! Moreno’s in town for a special Castro showing of the camp milestone with towel-clad go-go dancers and a tap-dance tribute.