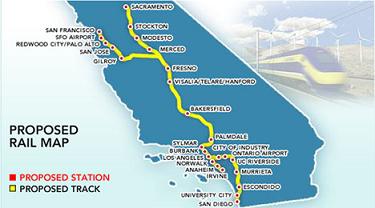 The California High Speed rail project has been facing resistance that threatens to derail the project. Not only has public support for the $68 billion project wavered in recent years, now the project faces a legal battle that could delay the project before the first rail is laid.

This week [Tues/4], Sacramento County Superior Court Judge Michael Kenny ruled that a lawsuit brought on by King County can go to trial. The lawsuit raises questions about the legality of using 2008’s voter-approved Prop 1A funding, $9.95 billion worth of bonds, to upgrade and electrify Caltrain’s tracks and incorporate them into the high speed system.

Another concern was that the proposed high-speed system would not be able to pull through with its promise of a 2 hour 40 minute nonstop ride from downtown San Francisco to Los Angeles’ Union Station if the high speed system had to share tracks with Caltrain.

The lawsuit also threatens to leave San Francisco’s new $4.5 billion Transbay Terminal without its planned underground high speed rail station, which could be disastrous for that project as well.

None of this seems to faze Rod Diridon, executive director of the Mineta Transportation Institute based out of  San Jose State University and former founding board member of the California High-Speed Rail Authority Board. He told the Guardian: “I think that [the project] will happen now. I think that our wonderful governor and our legislative leaders are going  make it happen now…. If it was delayed it would only be a matter of time before it came back.”

Another obstacle the high-speed rail system faces is a July 1 deadline for the state to find $3 billion to match federal grant money.

“Yes, it’s long-term,” Brown said in a Jan. 13 press conference in Fresno. “But we aren’t all, you know, Twitter-holics that have to have instant gratification after 140 characters. We can take a few years and build for the future, and that’s my sense here…It’s been on my list for a long time, and I think we’ve got to get it done.”

Brown’s plan to fund the rail project using cap-and-trade also sits well with Diridon. “[You can find] the money in the state of California.” Diridon told the Guardian enthusiastically. “Cap-and-Trade is generating over $800 million a year from selling carbon offsets. That’s not committed money. You can commit half that to build the high speed rail system over 30 years and you’ve got the money.”

Diridon went on to call funding concerns a “red herring” that is being used by opponents of the project. He expects private money, some even from China, France, and other countries with successful high-speed rail systems to come into the state to fund the project once investors see that California is willing to commit to such a project.

It is poised to bring to thousands of construction jobs to the Central Valley, where the first phase is scheduled to be built and where the unemployment rate among construction workers is 30 percent.

Environmentalists champion the project as a weapon to combat climate change by providing an alternative to putting more cars on the roads and planes in the sky, thus bringing the US closer to being under compliance of the Kyoto Accords, much like Japan and most of Europe.

Diridon said that a high speed rail system can alleviate traffic on California’s roadways, which has become a major concern in California, a state that is projected to double in population between now and 2065.

“Automobiles and roads are about to come to a screeching halt because of terminal gridlock. We can’t build more roads. There’s [not enough] dirt to pave to build significant additional roadway capacity coming into and out of our major metropolitan areas ” Diridon said. “We’ve got to create sustainable forms of transportation.”

“High speed rail is currently being built and in operation in 30 countries around the world. [In] every industrialized country and many developing countries.” Diridon says, “in many emerging countries and in some countries that we would consider backward have high speed rail.”

The US is also being outpaced by China, which has almost 5,000 miles of high speed rail, while Japan has 1,500 miles of rail.

Despite the wavering public support, a lawsuit, and funding concerns, advocates for the project remain optimistic and believe that the benefits of the project will outweigh the $68 billion dollar price tag.

“How can we imagine that California could not do it?” Diridon asked. With high speed rail projects maturing in Florida, Texas, the Northeast corridor, and the Midwest, California is in danger of being left behind by not only the rest of the country, but the rest of the world as well.