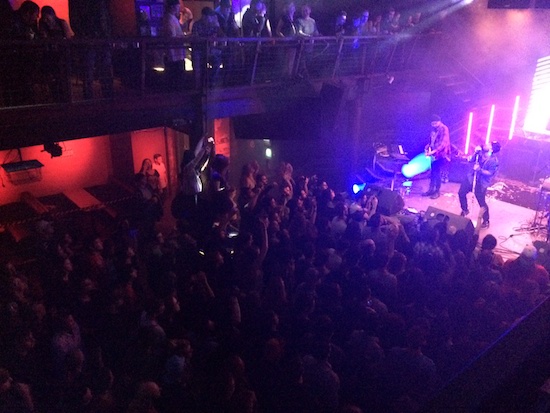 It was more than three years ago when I first saw the Limousines on stage. I hadn’t heard a song of theirs and the half-filled Nob Hill Masonic Center was waiting for Weezer to step on stage and take them back in time on their “Memories” tour time machine. In the meantime, we were stuck in the present, listening to an unknown indie electronic duo that danced their asses off as they performed. As lead singer Eric Victorino sang about crusty socks and stacks of pizza boxes, I realized the Limousines had a knack for entertaining a crowd.

Flash forward to Thursday night [Feb. 27] at the DNA Lounge at this year’s Noise Pop festival. Two full-length albums later, including last year’s Hush, and the Limousines’ talent for energizing an audience had only gotten better.

Fronted by the aforementioned singer-songwriter Victorino and jack-of-all-trades instrumentalist and producer Giovanni Giusti, the band successfully weaved together a setlist featuring songs from their entire catalog, including their 2009 EP, Scrapbook.

The band kicked off the show with their 2010 viral hit “Internet Killed the Video Star,” as Victorino tossed a red beach ball into the crowd to keep everyone’s hands in the air. As the song ended and the ball made its way back to the stage, Victorino popped it with childlike amusement before rolling through more songs from their debut album, Get Sharp.

The Bay Area-based pair didn’t take much time to talk to the crowd, but the nearly nonstop-dancing audience didn’t seem to mind a bit. They just wanted more music. The Limousines delivered with the energetic Hush opening track “Love is A Dog From Hell.”

When Victorino did decide to banter with the crowd, he was humble, if not particularly articulate. “This band means an awful fucking lot to us,” he said. And it showed. The Limousines played their smooth blend of electro-pop and synth-rock for nearly 80 minutes, giving the crowd their money’s worth.  The mostly twenty-somethings on the ground floor danced and clapped and made out with one another for nearly as long. The balcony was filled with a slightly older and less energetic crowd, but they looked like they were enjoying themselves as well.

As the show went on I realized something:  the Limousines are far from unique musicians. Their lyrics pine over heartbreak and wild nights. But it they set themselves apart from other performers with their attitude. Victorino and Giusti (and a third touring member from Texas) clearly wanted to be there. Their energy didn’t let up as they neared the end of their set with a number of tracks from Hush, including “The Last Dance,” and “Bedbugs,” the latter of which dealt with the fallout of sleeping with a friend. “I could lie and tell you we could still be friends,” Victorino shouted, “but you know it ain’t true.”