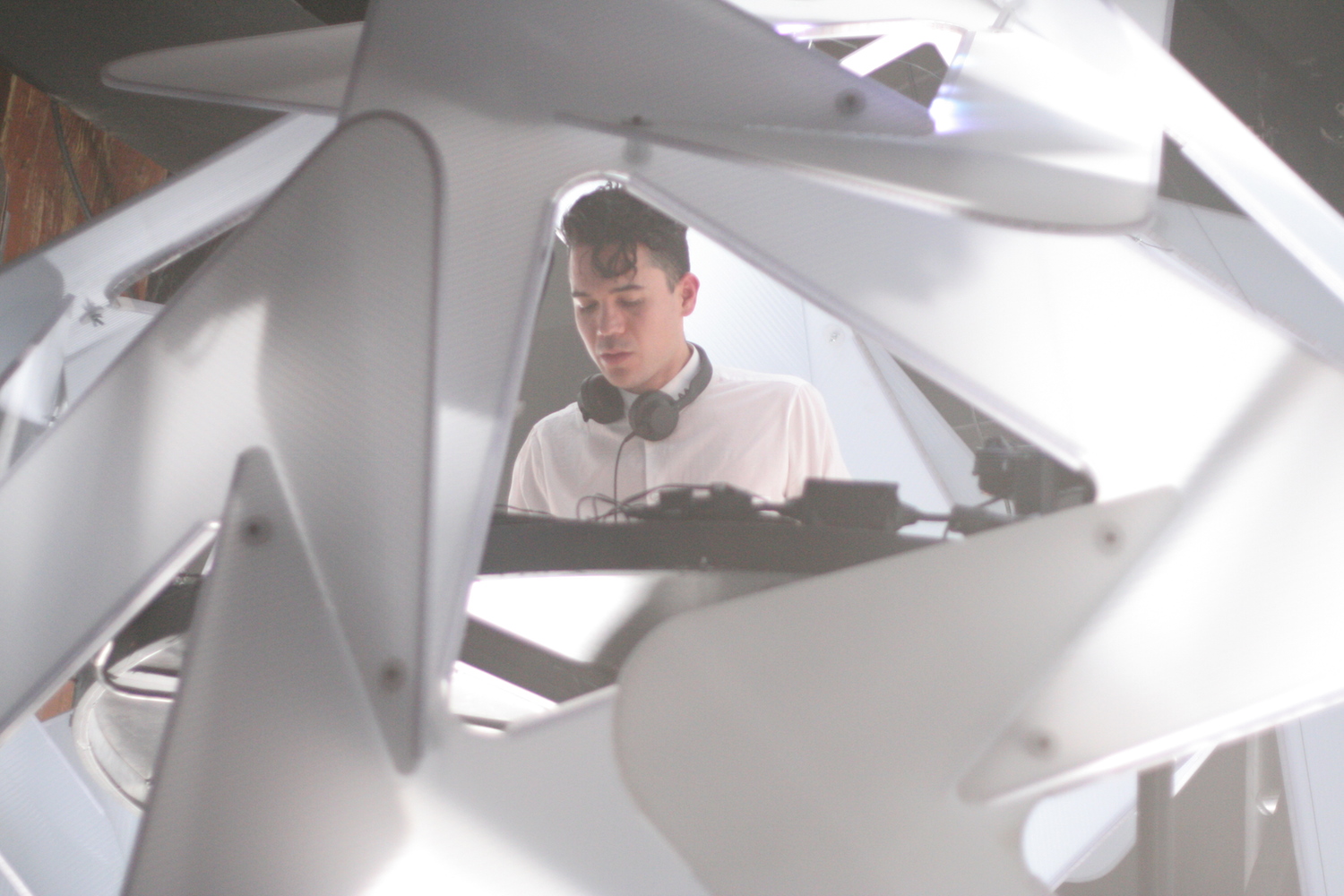 At this point I have no idea when this show is going to start, but it’s 9:22 and there’s another loner type rubbing the wood grain pillar in the middle of Mighty. He’s got his hood up as if keeping a low-profile, but
blowing it otherwise. It looks like he took the wrong drugs, slowing down when he might want to speed up. Because at this point in the evening, with some crew members apparently still wiring up the massive amount of lights on stage, he might be in for a wait.

Matthew Dear, the headliner for the night under his Audion moniker, is wandering around the club. Seems typically calm and collected, but I wonder if there’s panic behind the scenes. The show — complete with a custom visual installation — was originally scheduled to be at the Regency Ballroom but was moved to this much smaller venue due to poor ticket sales. (You could see the marketing urgency increasing with each email, first listing the show discreetly as “Audion,” and then “Audion Live: Subvertical,” before finally throwing all the names out in a final push with “Matthew Dear Presents Audion Live: Subvertical.”) After changing venues and dropping the ticket price, Noise Pop also announced all previously issued tickets would now come with a +1. Maybe it’s the rainy weather, but there’s hardly anyone on the dancefloor yet.

Except for squeaky-shoes, which is a good sign. A ubiquitous figure around SF clubs, in my experience if squeaky-shoes is at a show, you’ve made a good decision about your evening entertainment. (We call him squeaky-shoes because his shoes are really squeaky, especially when he’s dancing, in an individual style that involves leaping sideways/backwards a solid five feet at a time, pausing just before colliding with someone, and then walking away as if nothing happened.) He also always wears a comparatively silent ballcap. Look for him. He may be your spirit guide.

As far as I’m concerned, Matrixxman can not go on soon enough, as the same track has been playing over the P.A. for nearly 45 minutes. Aside from the dull bass, the music is drowned out, as if coming from the Chinese restaurant next door. Enduring this together, the woman besides me strikes up a conversation. She doesn’t know Matrixxman, Audion, or even Matthew Dear: she’s here for the lights, knowing that the visual setup was designed by the same team who did the mind-bending work on Amon Tobin’s ISAM.

WhenI last saw Matrixxman, it was at the same venue, and he was doing a closing set for Le1f. One track he played — “C.U.N.T.” by Tronco Traxx — is permanently lodged in my brain. Google it. Your expectations will be met. Tonight he’s keeping things a bit more in pocket, setting up the headliner with a less potentially alienating mix dominated by jacked up house, chopped diva vocals, and something that sounded like Prince (and may well have been Prince).

When the main event starts, all I can think of is packaging. Maybe it’s the corrugated plastic material that Matthew Dear is encased in, a neat sphere made up of interlocking LED-lit triangles; if Amon Tobin had a spaceship, Dear has a shipping container. It’s even branded in a way: the press release pointed out the resemblance between the triangles and the A in Audion. To me they look like a swirl of tracking buttons, with larger “reverse” and “play” arrows on each side of the stage. Like the comprehensive 10-year-spanning collection Audion X, this production seems designed to deliver Dear/Audion in an iconic form.

Tobin once impressed on me that not all electronic music is meant for dancing, so having a visual production like ISAM made sense. But while Tobin via ISAM warped around to places feet can’t easily follow, this isn’t really the case with Audion. Dear, particularly in this format, is clearly making dance music, heavily indebted to Detroit. (Not just the techno, but the car industry: his set drives along with little pause, frequently punctuated by a slow pulsing swell, revving and switching gears. See: “Mouth to Mouth” or “Motormouth.”)

A lot of the crowd dancing up front seems capable of following along unfazed, as if it’s just another night at Mighty. I’m more conflicted and end up with the ones in the back, stunned in place, not sure which
way to go. From back there, it could be a jaded rock show.

I look for the support beam molester from earlier, but don’t see him at all under the lights.