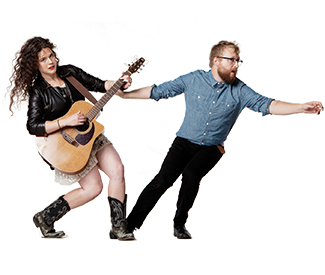 There are two sides to every road. But ask a long-haul trucker, a traveling salesman, or a pair of wandering minstrels like the Bengsons, and they’ll remind you that those sides converge at the horizon line.

The Bengsons — married musician-songwriters Abigail and Shaun — met randomly through a gig in New York City back in the late aughts. A mutual attraction, immediate and fierce, led them to become engaged within weeks of their first conversation. Both then in their early 20s, with serious and eclectic musical backgrounds, they recall the courtship as a whirlwind of powerful new emotions, bright and dark. Fast on the heels of marriage came five years of traveling across the country as their own band — a sure blend of musical influences that slips across various genres, in a sort of indie folk, neo-vaudevillian, truck stop cabaret, and drive-by rock opera that more or less dovetails with their daily selves. Among much else, living and learning as peripatetic artists and lovers has given them the opportunity to explore the meaning of all those feelings that led to their highly creative, itinerant relationship.

The fruit of that exploration is in the world premiere this week of Hundred Days, a major musical-theatrical venture carefully nurtured by Z Space and three years in the making. Directed by Anne Kauffman and with a book by Bay Area–based playwright Kate E. Ryan — both fully collaborative partners in the project, the Bengsons readily acknowledge — Hundred Days is something like a real-life Once: a true love affair cast through a darkly playful fictional story about Sarah (Abigail Bengson) and Will (Shaun Bengson), two 20somethings who find their powerful new love comes with a serious expiration date.

But at its heart are a body of songs of surprising force and subtlety, in dynamic arrangements that showcase both the Bengsons’ hard-won skills as musicians and composers, as well as their exhilarating ability to convey a rare sense of emotional honesty, of uncensored feeling, in their work. Before a recent rehearsal ahead of the show’s first previews, the couple sat down and shared musings on the journey that brought them here.

SF Bay Guardian You’ve described your courtship as being a kind of existential crisis, in that it suddenly put life in an unsettling new perspective.

Shaun Bengson It did start to feel incredibly short.

Abigail Bengson It’s life’s irony that in rushing to live life fully you do collide more quickly with the end of it. Rushing towards life is inevitably rushing towards death. That’s true of everybody. In the play, we put a timer on it, to help us talk about it in a more concrete way. But that’s just how we feel every day anyway [laughs] It’s just sort of the situation.

SB They’re such big feelings, it’s taken a really long time to sort them out and figure out what’s going on there — a lot of the wonder, and also the neurosis and the fear — all of that is where the show came from.

AB The more we’ve unpacked what was initially just an enormous feeling of life and dread in one package, the more we’ve discovered how ordinary that is. I’d say that’s been my primary comfort. In that moment I felt like, “I am struck by lighting. I am going to die.” My experience of life is no longer separate from my experience of death. I’m finding that that is true for so many people.

Any big love, not necessarily for a spouse, but for a child or for a parent, can have that same effect of making life an emergency and making death feel near. But also, in living with that breath in my throat for long enough, I’ve started to be able to soften into that and say, “OK, so now we make a sandwich.” I mean, how do we live in an ordinary way in the face of this thing that feels so enormous? Why is it all we’re thinking about all the time? I don’t know. I guess that’s why we ended up writing all those songs about it.

SFBG And that led you out on the road. How did five years of traveling, your day-to-day life on the road, actually come about?

SB We were living in an apartment in Brooklyn, and I had one year left on my teaching contract. We were playing in our band and working on the show. At the end of my school year, I still had the whole summer [paid]. At the same time, our very dear friend David was going back to South Africa, so he said, “You can stay in my house for the summer.” So we had these two months when we’d still have money from my teaching gig and we’d have a place to live. So we went and lived in the Berkshires for a couple of months, finished a show and set up tour dates, and left from there. We thought maybe we’d go back—maybe I could go back to teaching, if things didn’t work.

SFBG It felt right to leave?

SB It felt really good. It felt like such a relief.

AB It felt honest. It felt right. True to the way I think and what I am. It meant our life became, you know, gas money and Taco Bell, but it also became playing a lot of shows, doing a lot of service work in different places and learning a lot through that. We got to be students again in that sense, by putting ourselves in situations that were intensely uncomfortable over and over again, and writing music about them. It was a little songwriting boot camp of our own design. And we were getting to know each other’s styles and how we would write. I also feel, like, thank god we were married. I don’t know how you could be a musician and not marry a musician.

SFBG You hit the road five years ago and haven’t turned back. Was there a point early on where you hesitated? Were there any gigs that made you think again?

AB The first crappy gig I remember being really educational — and making me want to do it more even, though it was painful — was when we were at this biker bar…

SB Oh, yeah, this was in the Valley outside of Los Angeles. What was it called? Something like—it’s not Topanga. Tujunga? Is that place?

AB Fact-check all of this, we’re totally full of crap. [Fact check: Sunland-Tujunga sits in northeastern Los Angeles.] But we were playing this bar. Everybody was angry looking, a lot of shaved heads. I was [looking around the room, thinking], “What is going on with you?” Scared. So we got up and we played all the songs that we had written to date that were the most ferocious and aggressive and loud — and then we were kind of running out of those. So at the very end of the night we played this one song. It’s actually about a woman we knew well, whose daughter had passed away, and her struggling with that. And we sang for her and about that, in the moment sort of ready to get booed.

Then, when the set ended, this pack of — now, I know, lovely gentlemen, but at the time, terrifying — figures came towards me, and were weeping. They just said, “That one. Wish you had played more like that.” And I was like, “Fuck, me too.” I mean, I love those aggressive songs, too, they’re a big part of what we do, but it was such a lesson in prejudice for me — that I had judged what they would like, and assumed that it wouldn’t be anything honest for me.

SB It’s the lesson I’m still constantly learning. It takes so much more courage to be actually genuine in a moment. If I’m not careful, my tendency can be to play towards what I perceive people’s expectations are for the event, versus when we try to play the songs we most want to play and are most “us.”

AB But I also think it’s incredible training to play in rooms that are not receptive at first. Because part of the task then is to create the space where people can lean forward. I feel it was one of the best trainings for me. Play somewhere where they wish you were just playing Lynyrd Skynyrd. Where they wish you were a DJ. That’s the best place to go.

SFBG Have you two every attempted anything on the scale of Hundred Days before?

AB That was part of why we called it an opera at first. Because opera, they say, is the most collaborative art form — that you need every possible kind of artist to come in and make it happen. And that’s what Z Space has done, is allow for that.