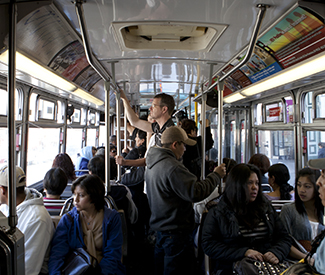 Update: Just a day after the release of this article, advocacy group POWER announced that Google pledged to pay for Free Muni For Youth for two years. “This validates both the success and necessity of the Free Muni for Youth program,”said Bob Allen, leader in the FreeMuni for Youth coalition, in a press release. “We need tech companies in San Francisco and throughout the region to work with the community to support more community-driven solutions to the displacement crisis.”

The funding though is promised only for two years, and when that timeframe is up the question will still remain — will Muni’s operating budget pay for something Mayor Ed Lee could find funding for elsewhere? Additionally, Google hasn’t announced funding for free Muni for seniors or the disabled, another program up for consideration in the San Francisco Municipal Transportation Agency’s new budget. That may change if and when it is approved by the SFMTA for the next budget year.

“I think it’s a positive step in the right direction,” Superivsor David Campos, the sponsor of Free Muni For Youth, told us. “But there are still questions about what it means in terms of the long term future of the program. It’s only a two year gift.”

“We have asked for a meeting with Google and the mayor’s office and the coalition to talk about long term plans, to find out more information about what this means.”

There’s a tie that binds all Muni riders. From the well-heeled Marina dwellers who ride the 45 Union to Bayview denizens who board the T-Third Sunnydale line, we’ve all heard the same words broadcast during sleepy morning commutes.

The play on words (also seen on Muni enforcement signage) would be cute if it didn’t perfectly represent how Muni riders may now be stiffed. A slew of new budget ideas hit the San Francisco Municipal Transportation Agency Board of Directors last week (Feb. 18), and who will pay for it all is an open question.

The first blow to riders is a proposed single-ride fare hike from the current $2 to $2.25.

Other proposals include expanding the Free Muni for Youth program, rolling out a new program offering free Muni for seniors and the disabled, and a fare hike to $6 for the historic F streetcar.

The odorous price jumps (and costly but promising giveaways) are moving forward against a backdrop of a Muni surplus of $22 million, which the board has until April to decide how to use, and a controversial decision by Mayor Ed Lee to make a U-turn on charging for parking on Sundays.

The meter decision would deprive Muni of millions of dollars.

“We’re not proposing anything here, just presenting what we can do,” SFMTA Director Ed Reiskin told the SFMTA board at City Hall last week.

There’s still time to change the SFMTA board’s mind on the proposals between now and final approval of the budget in April. But who will end up paying for a better Muni?

In 2010, the SFMTA instituted a policy to raise Muni fares along with inflation and a number of other economic factors, essentially putting them on autopilot. The SFMTA board still has to approve the fee hikes, which may rise across the board.

One-time fares may jump to $2.25. Muni’s monthly passes would see an increase by $2 next year and more the following year. The “M” monthly pass will be $70 and the “A” pass (which allows Muni riders to ride BART inside San Francisco) will be $81.

“To not have (fares) escalate as fuel and health care costs increase, you can’t just leave one chunk of your revenues flat,” he told the Guardian. Muni’s operating budget will expand from $864 million this year to $958 million in 2016. “Salary and benefit growth is the biggest driver of that,” Reiskin said.

“We’re not necessarily against the inflation increase,” he said. “But though the parking fines SFMTA levies are inflation adjusted, other rates (against drivers) are not. There are many things in our society that disincentivize transit and incentivize driving.”

Drivers enjoy heavy subsidies to their lifestyle on the federal, state, and local levels, from parking lot construction, the cost of gasoline, and now it seems, renewed free Sunday parking meters. The new fare increases are hitting transit riders just as the mayor is poised to yank funding from Muni to put in the pockets of drivers.

When the paid Sunday meter pilot began in early 2013, it was a rare flip in a city that often treats Muni like a piggy bank: money was floated from drivers and dropped onto the laps of transit.

A report from SFMTA issued December 2013 hailed it as a success for drivers as well: Finding parking spaces in commercial areas on Sundays became 15 percent easier, the study found, and the time an average driver spent circling for a space decreased by minutes.

Even some in the business community call it a success, since a higher parking turnover translates to more customers shopping.

Jim Lazarus, senior vice president of public policy at the Chamber of Commerce, is a supporter of the paid Sunday meters. “You can drive into merchant areas now where you couldn’t before,” he told us.

The timing couldn’t be worse. On the flip side the Free Muni for Youth program, which targets low-income youth in San Francisco, may expand next year at an estimated cost of about $3.6 million, and a program to offer free Muni for the elderly and disabled would cost between $4 and $6 million — close to the same the same amount that would be lost by the meter giveback.

“As an 18-year-old in high school it was a struggle to get to school, it was a struggle to find 75 cents or two dollars to get home,” Tina Sataraka, 19, told the SFMTA board last week. As a Balboa High School student, Sataraka had a 30-minute commute from the Bayview. She’s not alone.

A study by the San Francisco Budget & Legislative Analyst’s office found that 31,000 youth who faced similar financial hurdles had signed up for the Free Muni for Youth pilot program, a resounding success in a city where the youth population is dwindling. Authored by Sup. David Campos, the program may redefine “youth” to include 18-year-olds, who are often still in high school.

But initial grant funding for the program has dried up, so now Muni will foot the bill.

Not one to say “I told you so,” Sup. Scott Wiener said there were reasons for objecting to the program a year ago.

“My biggest, fundamental objection to the program was less that they were giving free fares to kids, and more that they were taking it out of Muni’s operating budget,” Wiener told us. “They need to find a way to pay for it, perhaps from the General Fund, and not just taking the easy and lazy way out.”

“There haven’t been discussions of having the Board of Supervisors fund free Muni for youth,” Reiskin told us. The same goes for the mayor. And though Reiskin was cautious and political about the possibility of Sunday meters becoming free again, he didn’t sound happy about it.

“As for what’s behind [the mayor’s] call for free Sunday parking, that didn’t come from us,” Reiskin told us. “That came from him.”

Mayor Lee’s office didn’t answer our emails, but politicos, including Wiener and Chronicle bromance Matier and Ross, indicated the mayor may be reversing on Sunday parking meters to appease the driving voter electorate.

There are two measures up on the November ballot, and one is aimed right at drivers’ wallets.

The two measures, a $1 billion vehicle license fee hike, and a $500 million transportation bond, are both aimed at shoring up the SFMTA’s capital budget. An October poll paid for by the mayor showed 44 percent of San Franciscans in favor of a vehicle fee hike, and 50 percent against, according to the San Francisco Chronicle.

Reiskin said the loss of those two ballot measures would be crippling to Muni’s future.

“The improvements we’re trying to make to make Muni more reliable, more attractive, those won’t happen. This is our funding source for that,” he said.

The mayor is busy smoothing the potholes towards the bonds’ success in the November election, but it seems he’s willing to pile costs onto Muni and its riders to do it.