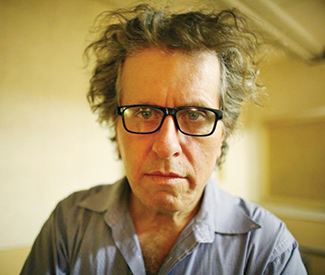 LEFT OF THE DIAL To an ’80s baby, at this point, calling Nickelodeon’s The Adventures of Pete & Pete a cult favorite is a little like thinking your childhood love of The Labyrinth or The Neverending Story is somehow quirky or unique — it goes without saying that they’re excellent, but we’re gonna need a lot of Kool-Aid: These are some pretty big cults we’re dealing with.

Which doesn’t mean, of course, that there wasn’t an air of “giant secret club meeting” at the Sketchfest Pete & Pete reunion that took place at the packed Marines Memorial Theater in 2013. That live show marked, I will admit, the first time I realized how crucial a role music had played in constructing the show’s singularly surreal, hilarious, kid-centered universe. I’d had the show’s jangly, irreverent theme song, “Hey Sandy,” on my iPod for years, and had read about how Polaris — the show’s own house band — was a sort of one-off project for members of the early-R.E.M.-era college-rock band Miracle Legion, which dissolved under a heated label dispute; the show’s creators were simply fans of that band and asked lead singer Mark Mulcahy to chime in. I knew both acts were driven by bright, breezy guitar riffs and Mulcahy’s distinctive, sometimes erratic, Lou Reed-esque vocals.

But it wasn’t until hearing Mulcahy sing a few songs from Polaris’ oeuvre live that — enamored, nostalgic, weirdly emotional — I went home and promptly dove headfirst into his solo work, of which there are four complete albums. If you want to work backward, Dear Mark J. Mulcahy, I Love You, released in July of last year after a nearly eight-year hiatus, is a beautiful starting point. It’s a moody, introspective, but clear-thinking and meticulously arranged record, stamped all over with the Mulcahy trademark: Lyrics that veer toward magical realism, the intonation of a less-goofy Jonathan Richman, gently dark witticisms that don’t quite make sense but you understand their feeling in your bones, bleak stories that don’t really seem autobiographical, but then — who can be sure?

Mulcahy can, but he doesn’t owe us an explanation. The gentlest, happiest track on the record, “The Rabbit,” — on which the songwriter sweetly confesses “I’m a sucker for magic/where’s the rabbit?” — is punctuated with sleigh bells; it’s the sound of an artist almost surprising himself with how much hope and curiosity he still has for the world. That’s followed by “Where’s the Indifference Now?,” a bitingly cynical guitar opus about the media’s vulture-like coverage of Heath Ledger’s death. (“You could apply it to Philip Seymour Hoffman now, I guess,” says Mulcahy.) If he often deals in surrealism, his gift is in the  human honesty of that contrast, the recognizable sense of home base in the space between those moods.

“I was home most of the day, it’s a snow day,” is the first thing he says, however, when, after a bit of phone tag, I finally reach him at the Massachusetts home he shares with his two young twin daughters. “I’m looking out the window right now at snow, just as far as you can see…so it’s a bit strange to be thinking about playing in San Francisco [for Noise Pop].”

One reason for the extended hiatus: In 2008, Mulcahy’s wife passed away quite suddenly, and he’s been raising the kids on his own ever since. A tribute album to help raise money for the family, Ciao My Shining Star (named for a line in the obituary Mulcahy wrote her), was arranged almost entirely without his knowledge and released in 2009, with artists who happen to be Mulcahy fans — folks like Thom Yorke, Michael Stipe, Dinosaur Jr., Frank Black, The National, Elvis Perkins, and Juliana Hatfield — performing Mulcahy’s songs.

It didn’t make sense to be away from home for long, explains Mulcahy of the break; since the most recent record (which draws its title from a note someone gave him) came out last summer, he’s been navigating the balance between touring and his home life with kids who, he says, are still too young to really understand much about what he does.

“I hadn’t played in such a long time, when I first started again I almost couldn’t believe I was doing it. But it’s felt really nice,” he says of touring so far. “I don’t know how I would do with a month-long thing, but so far it’s just great and really surprising that [the record] has done as well as it has. When I was in Miracle Legion, we always did pretty well, and I kind of assumed I would do that well on my own…I didn’t really put it together until later that it wasn’t a built-in success story. This album, I’m playing shows that are crowded, and it’s just a pleasant surprise to be feeling like I’m back to a point where I was before.” He’s done short stints in Ireland and England, and opened for fellow Bay Staters the Pixies on their tour warm-up in Northampton, MA.

As for the record, which Pitchfork (among others) has called his best solo work yet, the distinct moods of the tracks are at least in part the result of Mulcahy’s studio process: He recorded each song in entirety on its own day, then thought carefully about order and narrative. “I definitely don’t think of anything I write as one song, and I’m not really a big fan of ‘shuffle,'” he says. “I guess I come from the old school of sequencing.” He’s old-school in other ways, he will admit; he doesn’t pay too much attention to what’s currently on the radio. Lou Reed and the ’90s Connecticut indie band Butterflies of Love are first on his tongue when asked what he’s been listening to as of late. He’s no snob, though: “I go easy on guys like him,” is his comment on Bruno Mars. “Pop music…I mean, you take Miley Cyrus. I really thought she was terrible for a long time, I just didn’t get it. And then I really listened to ‘Wrecking Ball,’ and that’s a great song! I’m not gonna hate her just because I’m supposed to.”

And if people still wind up knee-deep in his catalogue because of his most mainstream, cable-televised work, as I did — well, that’s OK too.

“Polaris was a really unexpected twist in my musical career, but it was just a band that existed in your TV,” he says. “We never really played any gigs, which was probably a mistake. To the point where, when we did the Pete & Pete reunion in LA and played with a full band, it was surprising to realize, ‘Wow, we could play shows!’ And it’s funny, I haven’t really found anywhere that wants to book us since then, but we definitely want to do it. I absolutely still enjoy playing those songs.”

Hear that, Bay Area bookers? You could make a lot of ’80s babies very, very happy.