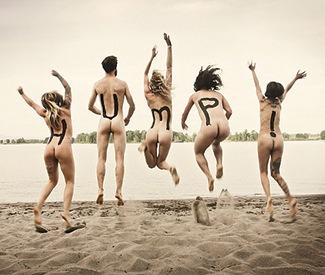 That’s Dan Savage — spunky sex columnist, “It Gets Better” maestro, and editor of Seattle’s the Stranger — calling me on the way to the airport. He’s flying the friendly skies for the nationwide Hump Tour (coming Fri/28 and Sat/1 to the Roxie Theater in SF, humptour.strangertickets.com), which is giving the Stranger’s notorious — and notoriously successful — annual homemade skin flick competition more, er, exposure.

In fact, the Hump Tour reminds me a little of the hilarious Sodomy Bus from Michael Moore’s 1990s TV show, filling the hills and crevices of America with resounding squeals and joyful bangs. Of course, the Sodomy Bus deliberately targeted anti-gay areas to make a political point — back when sodomy was still illegal, remember then? Whereas the Hump Tour projects handcrafted erotica with titles like Rumpy Pumpy (“an animated starter with funny, floppy dicks”), D&D Orgy (“roll for experience as the dungeon master’s fantasy game gets extremely real”) and Go Fuck Yourself (“one man time travels to save the world and fuck himself. Then things get complicated”) onto big screens in major cities with a side of popcorn. You can’t get more cuddly-quaint than that, no?

“I’m actually kind of worried about coming to San Francisco, though,” Savage said with an emphatic laugh. “Here I am, with my monogamish husband, editing this severely liberal paper and writing a sex column, my schedule full of porn, and I always feel like I’m going to be attacked for not being radical enough for SF, because I spoke out for same-sex marriage and other things.” I didn’t have the heart to tell him how much things have changed here — our overheated scandal du jour is over a queer club in Oakland politely asking straight people not to come because it’s too crowded, sigh.

Meanwhile, his stacked hubby has become a fixture on Seattle’s underground queer dance scene — does Dan ever hit the dance floor with him? “I usually hide in my room and write. It would never work if we were into the same things. You need some difference for that spark that makes you want to screw each other rather than just be each other.”

Techno heartthrob Matthew Dear’s dirtier, funkier alter ego Audion steps back into the limelight with what’s said to be an insane visual experience for this tour. (The team behind Amon Tobin’s mindblowing ISAM tour designed it.)

Danny’s been spinning for 30 years and has become the elder statesperson when it comes to dance music in America. But the mixes! Oh, the mixes. He’s a master of creating a roiling, huge-room groove, bending the sound of each track toward a glimmering whole. Most DJs give you crap about how they “take you on a journey” — Danny actually delivers. A four-hour set with Nikita and John Kaberna supporting.

This is a monthly Riot Grrrl tribute night at the bear bar. So perfect. February’s installment celebrates Carrie Brownstein, right after the new “Portlandia” season debuts, and we think how happy we are for her success, but please get on that Sleater-Kinney reunion already. With DJs Crowderism and Jimmy Swear.

The magic techno man from LA is a smooth, smart beast on decks, laying on the pulsing rhythms and subterranean energy. He’s at the Night Moves party with Shiny Objects and Brother in Arms, the nifty new “slo-mo deep house” collab from hometown heroes Deejay Theory and J-Boogie.

Killer broken bass sounds at this regular party, bringing Low End Theory’s DJ Nobody and IZWID Records’ Esgar to the tables, along with the heady Slayers Club crew supporting. It’s a release party for one of my favorite local basshead Joe Mousepad’s new EP, too.

You could do way worse than to jam out to “World Destruction,” this hip-hop god’s legendary 1984 collaboration with the Sex Pistols’ John Lydon, while you’re applying your mascara in the evening. Or do the dip to “Planet Rock” when you take it off the next morning. Zulu Nation has you covered round the clock.