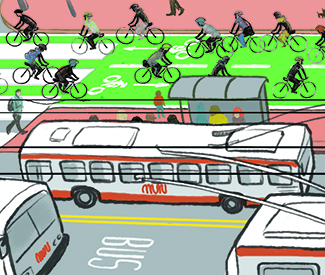 Prolonged warm-weather droughts seem a normal part of California life, but the intensity of drought impacts — shrinking snowpack, intense wildfires, crop failures, and the devastation of wildlife habitat and fisheries — is likely accentuated by global warming.

So it’s not enough to simply save water. In this drought, our sense of urgency about global warming should be ramped up. The science from the Intergovernmental Panel on Climate Change, respected scientists like James Hansen, and even the World Bank (historically no friend to radical ecologists) all stress that droughts will get worse unless greenhouse gas emissions peak in the next decade.

The science is clear. If we are to avoid a disastrous future of ecological upheaval, violence, and forced mass migrations of hundreds of millions of people (many of whom produce the least amount of carbon emissions) then we must dramatically reduce emissions now, and we must do it in a globally fair and equitable way. And to be fair and equitable, we must reduce driving. Here’s why.

Globally, transportation is the fastest growing sector of greenhouse emissions, owing in large measure to the expansion of global automobility. Presently 500 million passenger cars are in use (approximately one-third of them in the United States), but by 2030, this figure is expected to reach 1 billion worldwide.

This increase in automobility will contribute substantially to the “trillionth ton” of cumulative carbon emissions, which is an emissions threshold signaling global climate catastrophe. Today we are more than halfway there (556 billion tons). At current rates of consumption, including America’s ownership of 800 cars and trucks per 1,000 persons, we hit the trillionth ton in 28 years.

To avoid this, we must keep as much fossil fuel as possible in the ground. Because the United States is disproportionately responsible for at least 27 percent of the cumulative carbon emissions since industrialization, and has a disproportionate number of cars compared to the rest of the world, we in the United States have a particular responsibility to keep carbon in the ground.

If China, which has produced 10 percent of global emissions so far, had the same per capita car ownership rate as the United States, there would be over 500 million more cars, doubling the current worldwide rate. This would be madness. It would be worse than building the Keystone pipeline, which is what Hansen called “game over” for the global climate because it’s a spigot into the sticky, tarlike oils in Alberta which, if fully tapped, would be a carbon time bomb.

Ask yourself this: If China (and possibly India) successfully copy American-style driving, how much tar sands would that require? What kind of world would that look like? And if Americans (and especially environmentalists) expect the global middle class in China and India to stand aside while we keep on driving, that is stark, crass, and inequitable.

Many well-meaning environmentalists and progressives think that driving a Prius or buying an electric car will be adequate in mitigating this conundrum. They must reconsider. There is no “green” car when a global middle class replicates American driving patterns.

If the world’s fleet of gasoline-powered automobiles magically shifts to electric, hydrogen fuel cells, or biofuels, the change will draw resources away from industrial, residential, and food systems, or it will have to involve an entirely new layer of energy production (more tar sands). Massive quantities of coal and petroleum will be needed to scale-up to wind turbines, solar panels, nuclear, and other arrays of energy, as well as for all the new “clean cars.”

Are environmentalists still planning to drive around the Bay Area while waiting for this magic? I sure hope not.

In these global warming days, with drought on everyone’s mind, we must avoid wasting precious water washing cars, and we must reallocate street space with fewer cars in mind. A critical piece of the puzzle is to prioritize public transit and bicycles over automobiles by building exclusive transit and bicycle lanes, remove the lanes and curbside parking available to cars, install signal prioritization for transit and bicycles at intersections, queue-jumping so that transit can bypasses traffic stalled at intersections, restrictions on turns for automobiles, and transit stop improvements including bus stop bulb-outs and amenities.

Reconfigured streets must furthermore exclude car-oriented land uses like more off-street parking in the 92,000 new housing units projected for San Francisco by Plan Bay Area. These units, whatever size or income, should be completely car-free. And this must include removal of existing parking beneath homes, replacing garages with housing and returning the privatized curb cut to the public.

In many respects, the Haight Street corridor is a model for the kind of global warming mitigation strategy the rest of America should follow. The corridor has high density, transit dependent, and car-free households (over 30 percent in the Upper Haight and almost 50 percent in the Lower Haight/Hayes Valley) It has several walkable neighborhood commercial districts, as well as several hundred units of new housing (some of which are below market rate) under construction in Hayes Valley. Almost 25,000 passengers take the Haight buses (6-Parnassus and 71-Haight Noriega) daily, making it one of the busiest combined transit corridors in the city.

But the buses are crowded and often stuck in traffic, so the SFMTA has plans to improve service by increasing frequency, converting more of the existing route into faster “limited” service whereby some buses stop only at key points and removing the “jog” at Laguna and Page which adds delay to the inbound buses.

As I’ve written before, the Muni staff has a good plan known as the Transit Effectiveness Project, with a modest reallocation of street space for higher transit reliability, attracting more ridership, and potentially enabling San Franciscans to conveniently reduce driving to half of all trips by 2018 (it was at 62 percent in 2012). But on both ends of Haight Street, the city has fumbled. While not a disaster, hopefully Muni can learn some lessons and tweak the plans.

On the eastern end, Muni will shift buses off Page Street, converting a short segment of Haight back to two-way. The new two-way Haight includes a transit-only lane between Laguna and Gough/Market streets, which will dramatically improve travel times and reliability. Part of it will enable buses to bypass queues of cars making the right turn from Haight onto Octavia.

Where this scheme falls short is in the plans to simply give former bus stops on Page to private cars for parking. A more progressive plan would instead use the space to help make room for needed bicycle improvements on Page between Laguna and Market. Nearby are multiple housing construction sites where curbside parking has been temporarily removed — such as at the 55 Laguna site. The city has a great opportunity to innovate with transit-first policies at all of these construction sites.

Instead of turning space over to private cars when construction concludes, the city could instead build more bus lanes, pedestrian space, curbside car sharing, and bicycle space. The city could also return some of the space to parking, but only in exchange for parking removal upstream, such as at Haight and Fillmore, where bus stop improvements are sorely needed.

Throughout the city, there are block-by-block opportunities like these, where the city can help the climate instead of giving away parking. As the city discontinues bus stops and sees more housing construction, the policy should be to use curbside space for bicycles, pedestrians, or curbside car share — not simply giving it away to private car parking.

Meanwhile, at the other end of Haight, the city has also fumbled in proposing to reroute the 6-Parnassus, an important electric trolley bus line, off the Frederick-Cole-Parnassus segment. Bus riders in the Upper Haight are incensed. At a recent public meeting, a crowd of 90 people balked at the cut. Muni planners defended the proposal, arguing that ridership is low in the hilly segment above, and that a less productive segment would be shifted to the more crowded Haight Street.

This might seem logical but it may also be shortsighted, especially since the existing segment has overhead trolley wires. Drought notwithstanding, the electric trolley buses are the greenest motorized mobility in San Francisco, propelled by hydroelectricity from Hetch Hetchy.

Taking a longer and more progressive view, it might be useful to think of the debate over the 6-Parnassus this way: If the city is hoping to wean motorists from their cars by achieving the laudable goal of having 30 percent of all trips in the city by transit (up from 17 percent today), cutting service, even in relatively low ridership routes, is counterproductive. It raises the question: Is the ridership level low because the service was poor to begin with, including such irritating factors as less frequency, less reliability, or fewer hours of service? What would ridership levels look like if these less-crowded routes had high frequency, all-day and late-night service with high reliability?

Moreover, what would demand for these routes look like if parking were substantially reduced throughout the city while car-travel lanes were removed, creating space for bicycle lanes and transit lanes? Or what if there were a regional gasoline tax, a congestion charge, or other measures that priced automobility closer to its real social cost, thus producing higher demand for transit?

Surely, reducing the footprint of transit service, however inefficient that service might seem now, is not creating a template necessary for carrying 1.4 million daily passengers in the future, which is what it would take to reach significant emissions reduction goals and 30 percent mode share. Removing segments like the 6-Parnassus on Frederick will only make it harder to rebuild and accomplish that goal. And for political expediency it will also make it harder for Mayor Ed Lee to sell his transportation funding ballot proposals to progressive voters in November.

Muni planners ought to ditch the proposal to reroute the 6-Parnassus, and instead focus on maximizing improved reliability and transit efficiency on the other end of Haight Street by removing parking and prioritizing transit and bicycling on Haight and Page respectively.

Street Fight is a monthly column by Jason Henderson, a professor at San Francisco State University’s Department of Geography and Environment.