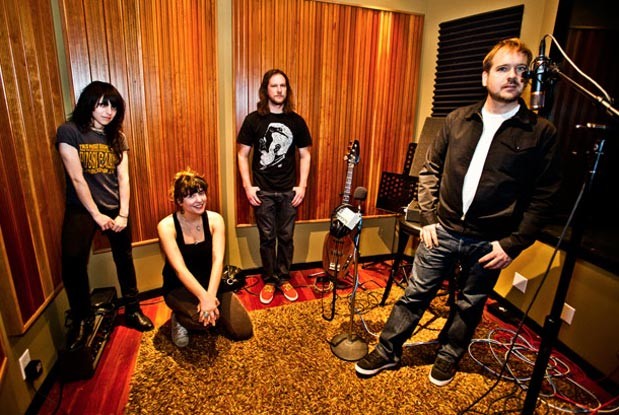 Like sands through the hourglass, so are the festivals of San Francisco. Or something like that. SF Beer Week is over, dear readers, but fret not! It’s the end of February, which is undoubtedly the cruelest month, no matter what T.S. Eliot said, when the darkest days of winter (in places that have that season) are finally over, and the first blossoms of spring are testing their sea legs like so many trepidatious Bambis. In these parts, that means one thing: Noise Pop is upon us.

This the year NP turns 22, so the festival is definitely old enough to hang with the big kids. And there are indeed some big kids in this year’s lineup — Lord Huron, Real Estate, and Dr. Dog, to name a few. But our favorite part about this festival is what it means for up-and-coming Bay Area acts, for whom playing Noise Pop is something of a rite of passage. We’ll be highlighting a few of our favorites over the course of this week, but for now, here are some suggestions for places to show some local pride. As per usual, the tightly-packed schedule presents some tough choices — so yes, we know there are more than five options here. Life’s tough. T.S. Eliot got that one right.

Papercuts and Vetiver @ The Chapel
This is a dreamy package deal if I’ve ever seen one. Papercuts‘ Jason Robert Quever’s melodic, melancholy sighs have never sounded as subtlely polished as on his upcoming album, Life Among the Savages, his first for the brand-new LA-based label Easy Sound Recording Co. Labelmates and fellow San Franciscans Vetiver‘s breezy folk-pop is music for a spur-of-the-moment afternoon drive up the coast. Throw in San Diego opener The Donkeys and you’ve got yourself the sonic landscape of a California we’re in the habit of relegating to car commercials where someone in the passenger seat is grinning and sticking their hand out the window playfully, a California where everyone’s fresh-faced and it never rains. Noise Pop-goers, you can have it all! Especially that last part.
With EDJ, and Vinyl selections by Britt Govea
8pm, $18
The Chapel
777 Valencia, SF
www.thechapelsf.com

(Plan B: Strange Vine/French Cassettes at Bottom of the Hill, or CCR Headcleaner/Skate Laws at Benders)

Jel @ Sparc
Forget the music, watching Jel repeatedly punch drum machine pads and twist sampler knobs on bulky, last-gen machinery would be worth the price of admission. The East Bay-based electronic hip-hop producer manages to keep his appendages intact while stabbing out a dizzying array of kick drums, snares, and percussion in ever-shifting breakbeat arrangements and tempos. On his latest LP, Late Pass (Anticon), Jel balances bass with shoegaze melodies, hints of psychedelia, electric guitar chords and some of his own emceeing. In line with the political undertones throughout the album (“Don’t get comfortable,” the title track advises), this show marks the two-year anniversary of the San Francisco Patient and Resource Center, a medical cannabis nonprofit. — Kevin Lee
7pm, free (RSVP req. for non badge-holders)
Sparc
1256 Mission, SF
www.sparcsf.org

(Plan B: Social Studies, Aan, Farallons, Max and the Moon at the New Parish)

Painted Palms, Dirty Ghosts, Happy Fangs @ Slims
Sure, Cold Cave is technically the headliner, but calling these three local bands supporting acts just seems wrong. SF duo Painted Palms are the darlings du jour of the psych-rock world, for good reason — Forever, released just last month, is one of the most lush, layered debut albums we’ve heard in a while. Dirty Ghosts‘ Allyson Baker is a frontwoman and a half, drawing from punk, blues, experimental rock, and electronica, and the band has promised a new record in 2014, so we wouldn’t be surprised to hear some fresh material. And Happy Fangs, featuring boundless, rough-around-the-edges, sweet n’ salty energy from former members of My First Earthquake and King Loses Crown, will be playing their first show with a live drummer (check back here for a Q&A with them later this week).
7pm, $16
Slim’s
333 11th St, SF
www.slimspresents.com

(Plan B: Soft White Sixties/The She’s at the Chapel, Bleached/Terry Malts at the Rickshaw Stop)

Black Map, Free Salamander Exhibit, Lasher Keen, Happy Diving @ Bottom of the Hill
Yes, there’s a lot going on Saturday night. No, you shouldn’t go see that band you’ve seen a million times before. If you’re in the mood to get super-heavy and excellently weird, this is a solid lineup of newish Bay Area talent running the gamut from Black Map‘s epic, guitar-driven, smart-art-rock-meets-anthemic-metal sound to upstart Happy Diving‘s soft-grunge-leaning, head-bobbing power pop. Lasher Keen’s earthly psychedelia seems to be from another century, you just can’t tell if it’s the future or the past — we’re pretty sure they’d say that’s a good thing. And Free Salamander Exhibit is, of course, the new project from former members of the elaborately theatrical, cultishly loved experimental noise-rock outfit Sleepytime Gorilla Museum. Let’s just say you’re not going to be bored.
8pm, $15
Bottom of the Hill
1233 17th St, SF
www.bottomofthehill.com

(Plan B: Mikal Cronin at the Chapel, Mark Kozelek at Great American Music Hall — look for our feature on the latter in this week’s paper.)

Oakland’s Rogue Wave set the tone for lo-fi, indie pop-rock way back in the mid-aughts, with an onset of popularity so sudden it seemed unsustainable. Not so — the lineup may change, but the band’s talent for crafting jangly earworms needs no further proving, as of last year’s Nightingale Floors. Trails and Ways, whose members met at Cal, make danceable, Bossa Nova-infused dream-pop that broadens and deepens with repeated listens, but doesn’t take itself overly seriously; oh yeah, they also sing in three languages. And Wymond Miles, still probably best known as the Fresh and Onlys’ guitarist, put out his second solo work late last year — a dense, thoughtfully arranged post-punk gem of a record. Note: This is an afternoon show and, with a bloody Mary on the side, would probably be an excellent hangover soother.
3pm, $20
The Chapel
777 Valencia, SF
www.thechapelsf.com