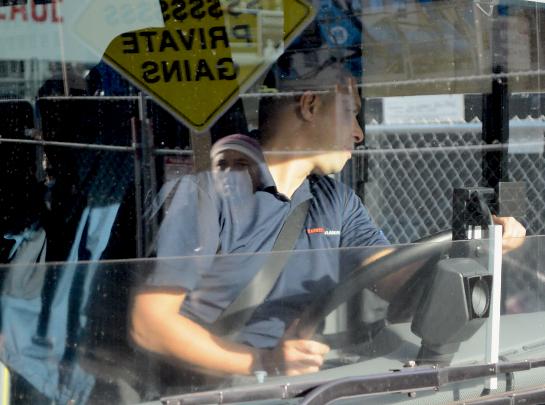 San Francisco activists and labor filed an appeal of the controversial commuter shuttle (aka, the Google buses) pilot program to the Board of Supervisors today, alleging it was pushed through without a proper environmental review.

The appeal was filed by a coalition of the Harvey Milk LGBT Democratic Club, SEIU 1021, The League of Pissed Off Voters, and Sara Shortt of the Housing Rights Committee.

The shuttles, mostly to Silicon Valley tech firms, pick up passengers in Muni bus stops. The use of public bus stops would incur a $271 fine for private autos, and often do, but the shuttles have largely received a free pass from the city. Last month, the San Francisco Municipal Transportation Agency approved of a pilot plan hatched behind closed doors that allows use of 200 bus stops by the private shuttles, charging only $1 per stop, per day.

The appeal alleges that the program needed review under the California Environmental Quality Act, which asks for projects to be analyzed for, among other things, land use, housing, and public health impacts.

“CEQA actually identifies displacement as an environmental impact,” attorney Richard Drury, who filed the appeal on behalf of the coalition, told us. “Almost no one knows that. Honestly I didn’t know that, until I started researching all of this.”

If the Board of Supervisors doesn’t back the appeal, there may be a court battle on the environmental impact of the shuttle stops, which increase rents and home prices nearby.

Paul Rose, spokeserpson for the SFMTA, responded to the complaint in an email to the Guardian.

“We developed this pilot proposal to help ensure the most efficient transportation network possible by reducing Muni delays and further reducing congestion on our roadways,” Rose wrote. “We are confident that the CEQA clearance is appropriate and will be upheld.”

In the meantime, Drury told us, the coalition is performing environmental research of its own. It has experts from the US Environmental Protection Agency and other organizations analyzing diesel outputs from the shuttles, as well as the impact of shuttles on displacement.

“CEQA review needs to have a review before they start the pilot, not after,” Drury said. “They’re basically doing it backwards: let’s have 200 stops and 35,000 people in the service, and figure out what happens.”

Some studies conducted already show that affluence rises wherever the shuttle stops are placed. One by Chris Walker, a 29 year old in Mumbai, India, shows rising property values in and around the Google bus stops from 2011 to 2013.

This heatmap shows a rise in property values appreciated near shuttle stops.

“We see the Google Bus as a part of a larger effort to privatize public spaces and services, displacing both current residents and the public transportation system we rely on,” said Alysabeth Alexander, Vice President of SEIU Local 1021, in a statement. “San Francisco has a long history and tradition as a union town. With the tech takeover, San Francisco is becoming inhospitable to working class families. Our wages are stagnant, as the cost of everything is skyrocketing. This is a shame.”