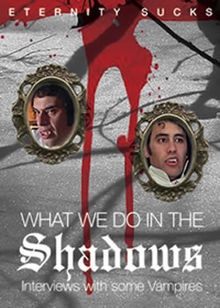 The current second-generation movement of Native/Indigenous filmmakers took the spotlight at the Sundance Film Festival’s celebration of the 20th anniversary of its annual Native Forum.

The event gathered some of the most important figures from around the world to not only screen their most recent films but to share artistic works that inspired them to become filmmakers themselves. Sundance favorite Taika Waitita — a self-proclaimed “Academy Award-losing filmmaker” for his 2005 short Two Cars, One Night, he’s best-known for his wonderfully quirky 2007 film Eagle vs. Shark — read a sequence from Andrei Tarkovsky’s Stalker (1979), while his vampire comedy What We Do in the Shadows (co-directed with Flight of the Conchords‘ Jermaine Clement) enraptured Midnight Movie audiences at the 2014 festival.

And even though Smoke Signals (1998) helmer Chris Eyre (the defining first generation filmmaker) brought the house down by reading an entire Sherman Alexie short story (Alexie also wrote Signals), filmmaker Billy Luther — who directed the documentary Miss Navajo (2007)  — further took the edge off of things by reading a memorable scene from The Golden Girls. But I found myself most drawn to Sydney Freeland and Sterlin Harjo’s readings. Both filmmakers also had features in the festival.

Freeland wrote and directed her stunning debut, Drunktown’s Finest, which showcases lively performances by Jeremiah Bitsui (Victor from Breaking Bad) and newcomer Carmen Moore. The wonderfully entangled screenplay weaves together its Navajo characters, subjects, and themes with powerful precision, announcing Freeland as a voice to be taken seriously.

In a post-fest interview I learned that ensemble films — as widely varied as Casablanca (1942) and Amores Perros (2000) — inspired her greatly, which led me and other viewers to retrace some of Drunktown‘s more compelling plot twists. The film’s complicated dealings with a MTF trans-woman are enlightened, as are the ways it explores the Navajo Nation’s beliefs about a third gender: nàdleehì, meaning “one who is transformed” or “one who changes.”

Ironically, the filmmaker explained, “I had to leave the reservation and move to San Francisco to learn about this.” Freeland’s own interests changed dramatically after finding photography and filmmaking in college. “Making movies just was not an option growing up. Other fine arts were being taught, like pottery and weaving, but not filmmaking.”

When asked about the growing number of native filmmakers, she attributes much of it to technology’s increasing accessibility, via phones and digital cameras.nd Drunktown’s Finest has achieved what second-generation movements have the power to do: complicate matters.

Part two coming tomorrow, with Sundance vet Sterlin Harjo (who screened his first documentary, This May Be the Last Time, at Sundance 2014) and Smoke Signals’ Chris Eyre.