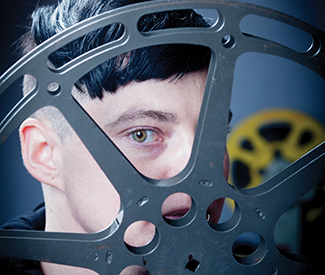 GOLDIES If you want to see a filmmaker light up brighter than a brand-new projector bulb, ask him about his camera.

“For my 30th birthday, my cousin, Peter Miller, who’s also a filmmaker, sent me this big box,” Malic Amalya says of his Krasnogorsk-3, or K-3, camera. “As soon as I saw it, I was like, ‘The best present that could be in there is a 16mm camera.’ And it was! And it’s wonderful. It has different lenses, it can go at different speeds. I’ve been working with 16mm since 2006, and the process is so different than video. You have to set the focus, set the aperture. And it’s so heavy, and so expensive. Every shot that you take matters. That slowing-down really changed my practice, in making every shot intentional.”

That love of 16mm entered Amalya’s life while he was earning a filmmaking MFA from the University of Illinois at Chicago. After graduating in 2009, he spent a few years in Seattle (he’s been the Experimental Film Curator for the city’s Lesbian and Gay Film Festival since 2010) before the San Francisco Art Institute’s MA program lured him south. “I wanted to be re-engaged in the theory process,” he says.

At SFAI, he fell under the spell of legendary underground filmmaking brothers Mike and the late George Kuchar. “When I started there, I had known their work, but not super in-depth,” Amalya says. “Claire Daigle, the director of the MA program, was like, ‘You have to take a Kuchar class!’ So I took a class with Mike, and that informed my thesis in a lot of ways.”

He graduated in 2013, and his graduate thesis, “Divine Abjection,” explores the idea that artists like George Kuchar and John Waters “deploy the grotesque and the titillating to confront the violence targeted at queer bodies,” Amalya explains. “Building on psychoanalytic feminist theorist Julia Kristeva’s work on the subject, I assert that these filmmakers command their audience to either find elation within queer ‘perversion’ or eject themselves from the narrative via nausea.”

Given his enthusiastic pursuit of education, Amalya’s career goal is no surprise. “I would love to teach experimental filmmaking or queer filmmaking. I’d like to bring in a lot of theory and academic texts into my production classes.” And he’s on his way; this summer, he’ll be teaching Kuchar films, among others, in “Transgressive Transmissions: The Art of Lo-Fi and High-Horror,” offered as part of SFAI’s public education program.

But don’t get Amalya the film scholar (interested in “messy-grotesque” work) confused with Amalya the artist (who makes what he describes as “quiet-formal” films). “The films I write about are quite different from the work I’m making,” he says. “While my interest in film theory inspires my films, and my knowledge of filmmaking informs my analysis, the distinction in genre helps separate my working styles. My writing process is analytical, while my filmmaking process is very intuitive.”

“A lot of times, my process is filming things that I’m visually interested in. A gesture that I’m interested in capturing, or colors and movement. I’m always filming different things and then sitting with them. I still have rolls of film from years ago, where I’m like, ‘Someday this is going to come together.’ And then, in the editing process, it does.”

Local filmgoers have had a chance to see Amalya’s work at venues like Periwinkle Cinema at Artists’ Television Access and San Francisco Cinematheque’s Crossroads Festival. The latter’s 2013 incarnation is where I caught Amalya’s Gold Moon, Sharp Arrow, a 12-minute exploration of social psychologist Stanley Milgram’s 1963 obedience experiment; it interweaves a re-creation of the experiment (in which participants, asked to administer electric shocks to subjects who faltered in a word game, followed instructions all too well) with shots of nature and decay — a bee’s nest, a chicken coop, smashed windows, an abandoned house. The film was created with Max Garnet, a performance artist and makeup artist Amalya shared a house with in Seattle.

“Max had the idea of working with the Milgram experiment. So I started reading up on it. On YouTube, you can watch the original footage,” he says. “We were interested in the power relationships that were played out in this experiment, and we were talking a lot about the different power engagements in our queer community in Seattle, and in the greater culture. What really captivated me was the word pairings they used in the original experiment and how seemingly arbitrary they were, but how loaded they were as far as gender norms and cultural expectations.”

Though Amalya enjoys working with others, “A lot of my filmmaking practice is me with a camera exploring different places,” he says. “My process of writing scripts, setting up shots, and editing feels very internal, and at times almost private.”

The theories of another experimental artist — musician Michel Chion — have provided further inspiration. “In his book, Audio Vision, Chion argues that sound never replicates an image, but rather adds a another dimension to the picture. [His notion of] ‘added value’ has become a mantra of sorts while I’m working. In my films, I work against illustration, as well as music videos and didactic polemics. Rather, I strive for movement, light, dialogue, and text to ricochet off each other, forging new and unforeseen connections.” *