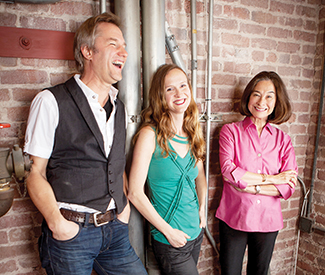 GOLDIES Greta Schoenberg founded the San Francisco Dance Film Festival in 2008, but she didn’t realize it at the time. It began as “Motion Pictures,” a gallery show combining dance photography with screenings of Schoenberg’s “screen dance” films — short works she’d made specifically for the camera.

It was a success, so the next year, she asked other artists who were making dance films to contribute. (The dance-film genre also includes staged performances filmed for archival purposes and dance-themed documentaries, in addition to more experimental works.) The 2009 event was also a hit; it attracted the interest of the Ninth Street Independent Film Center, which was searching for a way to celebrate Bay Area National Dance Week. Schoenberg’s shorts program was a perfect fit.

“Skye Christensen — who was the director [at Ninth Street], and is now on our board — suggested that we make it into a real festival,” remembers Schoenberg. “It was her idea to call it the San Francisco Dance Film Festival, which was a little daunting. But I’m so glad I did, because I think that leap forward was just the risk somebody needed to take, and it happened to be me.”

With help from Christensen and other community arts organizations, Schoenberg assembled a volunteer staff and launched the first official San Francisco Dance Film Festival in 2010. The DIY effort worked. “We had people sitting on the floor in the lobby in our rush ticket line. We had already outgrown the [Ninth Street] space.”

An evolution into something even bigger seemed inevitable. Enter Judy Flannery, who was looking for a way to bring Dance Screen — the prestigious dance film and video competition presented by the Vienna-based International Music + Media Centre, or IMZ — to San Francisco.

“When I was first asked by this European organization if I could help them collaborate with a US dance film festival, I said the only two I knew of were in LA and New York,” recalls Flannery — until she learned about Schoenberg’s fledgling enterprise.

“I made this proposition to Greta that it would be great to get the San Francisco festival better-known. I felt she’d done this amazing thing, which was to identify a need. There wasn’t anything in Northern California that allowed filmmakers to show dance films,” Flannery says. “Plus, this is one of the most vibrant dance communities in the country, and we’re also renowned for having a super independent film community. So why hadn’t they gotten together to make dance films? This was a golden opportunity to make this a more established festival.”

She adds with a laugh, “I basically said I’d like to put it on steroids.”

Initially, Schoenberg hesitated — but Flannery won her over.

“I made this Faustian deal with Greta that I would do a big chunk of the work, alongside Greta and a lot of volunteers, to help establish the fourth festival, in 2013, as a collaboration between the San Francisco Dance Film Festival and the European Dance Screen,” she says. “I was also able to get some other artistic organizations involved, like the San Francisco Ballet and the San Francisco Film Society.”

The SFDFF’s newly heightened profile allowed for an expanded program beyond screenings, with panel presentations (on topics like digital distribution and music-rights issues) and the “Co-Laboratory” program, which paired local choreographers with local filmmakers and gave them a compressed window of time (one week!) to create a short dance film together.

“We wanted to encourage local dancers and filmmakers — who are very busy doing their own things — to go, ‘Look what happens if we work together!’,” Flannery says. “It was a wonderful way to engage the very communities we want to celebrate. This year, we want to build on what we were able to pull off last year.”

And the SFDFF’s upward trajectory shows no sign of leveling off. Plans for the future include, of course, the 2014 festival (calling all filmmakers: submissions are open through May 1), which takes place in November and will include a tribute to veteran documentarian Frederick Wiseman. Eventually, the SFDFF hopes to become a year-round organization. Expanding its audience is a key goal.

“This genre is not new — it’s been around since the early days of cinema,” Schoenberg says, citing the works of Muybridge and Maya Deren as examples. “What is new is the technology that’s available for the average dancer. Now, you can make a film on your iPhone. That’s exciting! And through these works, you can expose somebody to dance in a way that they’re comfortable with. They might not inclined to go to a live performance of an unknown contemporary dance company, but if they’ve seen a shorts program of contemporary dance works, maybe they would. As a dancer, I don’t feel like dance films can ever replace live performance. That would never be the goal. But using these films as ambassadors, and getting people to understand dance a little bit more — I think they’re an amazing tool for outreach.”