Home Live Shots: Augustines get anthemic at The Independent
SectionNoise 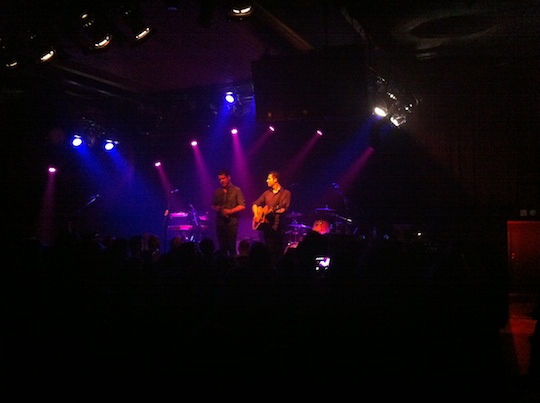 When my girlfriend and I got into the cab for the ride to The Independent on Monday night, the Slavic driver was rocking out to “The Summer of ’69.”

It felt like a fitting prelude to seeing Augustines, a band too sincere to be cool, too earnest to give a damn about being praised by, say, Pitchfork. There’s something refreshing about a band who pin their hearts to their sleeves, who perform every song as if it were their swan song, and who seem genuinely enthusiastic about performing music.

Augustines are a trio of singer/guitarist Billy McCarthy, multi-instrumentalist Eric Sanderson, and drummer Rob Allen. Sanderson and Allen are solid musicians who seem to have fun performing, but it’s McCarthy, who was born in Santa Cruz and grew up in Placer County, who stole the show. He’s a theatrical performer who was really stoked to be playing in “fucking San Francisco,” a place that he said “handed me my ass so many times.” Now, living in New York, his affection for California was obvious: “Fucking California! Our coastlines are long,” he began in a sort of call-and-response with the audience, “Cigarettes are $5. Burritos are $7. We hug people when we see them even if we don’t know them very well.” His banter during the show was pitch perfect; it was obvious he was enjoying himself. He even seemed excited to do the obligatory crowd-pleasing clap-your-hands-for-living-in-San-Francisco thing.

I get the sense that McCarthy’s this pumped to play anywhere — “Houston, you have such great museums!” “Phoenix, this dry is heat amazing!” — so this tempered my disappointment in the crowd’s initial lukewarm reception to Augustines’ fantastic new songs off their self-titled album. (“Cruel City,” a fuck-you to New York City, is like the bastard son of “Graceland” and “Born to Run”). But then again, I doubt anyone could match McCarthy’s enthusiasm, and soon the crowd warmed up. I don’t think it would’ve mattered much to the band if we didn’t. They were in fucking San Francisco and were going to give their best effort, dammit.

The best moment in a show full of great ones came during the encore, when McCarthy and Sanderson performed an unplugged version of “East Los Angeles,” a bittersweet love song for the ghosts of LA, off 2011’s Rise Ye Sunken Ships. McCarthy, bottle of whiskey in hand, moved away from the microphone to the right of the stage, asked for our cooperation, and performed for the hushed audience an amazing rendition. For a singer who relies on a lot of bombast, McCarthy is capable of making a room full of 300 people feel intimate. Especially when, at the end of the show, he thanked us for coming, implored us (this guy doesn’t ask, he implores) to get home safe, and then hugged his fellow band members.

We didn’t take a cab home, we walked. And, because we were so high on the experience of seeing someone do something they love, with passion and energy and conviction, we got home in record time. I can’t think of any better way to praise a show than to say that its energy carried us a mile and a half.