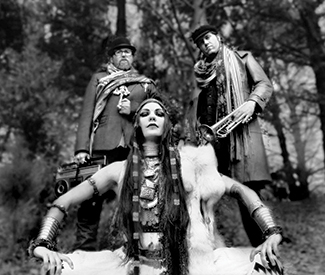 LEFT OF THE DIAL If there’s one thing Allen Scott remembers from opening the Independent 10 years ago, it’s the rush. Not the emotional high (though surely that was a factor too), but the literal rushing around that was necessary to open a state-of-the-art live concert space with a capacity of 500 “on a shoestring budget.”

“We barely got open on time,” recalls Scott, the managing owner of the venue at 628 Divisadero — the latest in a long line of storied San Francisco clubs that have shared that address. “We had friends painting it right up until about the day before we opened. We’d moved the sound system in but didn’t have alarms set up, so we were taking turns sleeping on the stage overnight. People would come by and say ‘When are you opening?’ and we’d say ‘In a couple days,’ and they’d laugh, like ‘Good luck with that.’ The night we opened, the fire department signing everything off while the band was sound-checking.”

That band was I Am Spoonbender, and that show was the first of more than 2,500 that have taken place within the Independent’s walls since February 2004. If the space feels like it has a deeper history than that, it’s for good reason: In the late 1960s, it was home to the Half Note, a popular jazz club that saw the likes of Miles Davis and Thelonius Monk; the house band featured George Duke and a young Al Jarreau. In the early ’80s it became the VIS Club, and served as a hub for local punk, new wave, and experimental bands; by the late ’80s it was the Kennel Club, and hosted up-and-comers like Nirvana and Janes Addiction. In the mid-’90s, it was reborn as the Justice League, nurturing burgeoning electronic and hip-hop acts — Fat Boy Slim, Jurassic 5, the Roots, and plenty others all found enthusiastic crowds. To put it mildly, if those walls could talk, they’d tell a lot of good party stories. Next week’s lineup of shows will only add to the vault: From Feb. 19 through Feb. 26, the Independent will host Allen Stone, John Butler Trio, Beats Antique, DJ Shadow, Two Gallants (below), Rebelution, and Girl Talk in a series of special performances to celebrate the club’s 10th anniversary.

As the club has changed, San Francisco — as it is wont to do — changed around it. The formerly gritty Western Addition is now shiny NoPa (at least according to real estate agents); what was once a bustling center for the city’s African-American population and jazz scene is now more of a bustling dining destination for the upper-middle-class. Regardless, says Scott, there’s no question that the Independent is “in the heart of the city…being part of this neighborhood, this community, is so important to us.”

Scott was just a young San Francisco promoter with an impressive track record when he was approached in 2003 by Gregg Perloff and Sherry Wasserman — proteges of Bill Graham and owners of the scrappy, barely-year-old concert promotion/marketing team Another Planet Entertainment — to run booking and promotions at the unopened venue.

“The name ‘The Independent’ came up through some discussions with music industry friends,” Scott told SF Weekly at the time of the club’s opening. “The whole idea of the Wal-Marting of America applies to the music industry as well. We wanted to stand alone: independent thinking, independent music. We’re an independent company. Of course, it was also an elbow in the side of the corporate giant out there.” (Perloff had just parted ways with Clear Channel under less-than-friendly circumstances.)

A decade later, of course, APE runs a couple of the biggest festivals in Northern California, and functions as the exclusive promoter for Berkeley’s Greek Theatre, Oakland’s Fox Theater, and the Bill Graham Civic Auditorium in San Francisco, among others. And Scott’s now the vice president of APE. But The Independent, now the smallest APE operation, is still his baby.

“We wanted a utilitarian room that had great sound, great lights, and perfect sight lines,” he says. “And because it’s a box, the sight lines there really are perfect — no matter where you’re standing in the room, you can make eye contact with the performers and vice-versa. I think it’s the best-sounding room in the city. And I’d say it has the best lights of any venue underneath the size of the Fillmore.”

Nicki Bluhm is among the local artists who now regularly pack larger venues (see: her sold-out Fillmore show Jan. 25) but maintain a soft spot for the Independent. “[The club] treats their artists with so much respect,” she says, adding that the atmosphere there has led to some of her band’s most memorable shows. Also memorable, says Scott: Obama’s first presidential win, when the club held a free results-viewing party with live music. “When he won, the place erupted, and everyone spilled out into the streets…so there was a band playing inside and people just raging outside,” he recalls. “Very San Francisco.”

What does a quintessentially Brooklyn-loft-party-post-punk band sound like when two of its principal members relocate to LA? Judging by VoyAager, the lush, layered, immersively and epically spacey new album from experimental stalwarts Aa (“big A, little a”), it sounds like someone sent an assortment of synthesizers, samplers, and drum sets into the future, and the future is an industrial cityscape full of curiously advanced life forms who don’t communicate in a narrative sense, but they sure have lots of energy, and they like writing melodies (though not the kind you’ll likely hear on the radio anytime soon). Life sounds rough around the edges on this planet, but you kinda don’t ever want to leave. (Give the first track a listen at the end of this story.)

John Atkinson, the drummer-heavy band’s main vocalist and one of said members who relocated to the West Coast about three years ago, said the album — the band’s first in seven years — is actually the culmination of nearly seven years of recording. “We all work on songs together even when we’re not in the same place,” explains Atkinson, who lived (and recorded some of his parts) in France in the mid-aughts. Though Aa’s lineup and instrumentation seem to be constantly in flux (at this point, says Atkinson, there’s something of an East Coast lineup and a West Coast one), the band’s sound is distinctly more cohesive and melodic than on its 2007 debut, gAame.

“We don’t want to be making straight-ahead pop songs, but at the same time, I’d say the sounds of pop music have broadened our palette, while sticking to the way we like to put songs together,” says Atkinson. The changing lineup has helped the band’s sound evolve, as well: “Everyone listens to different music…dark industrial heavy stuff, electronic stuff, metal, punk, another drummer is into Samba, world music and jazz…everyone brings something different, so it’s great to watch that kind of stew congeal into something that still sounds like us.”

Playing the Hemlock on Feb. 15 will be the second stop on a weeklong West Coast tour that will take the guys up to Seattle, after which Atkinson will be making a point to stop at every basketball stadium he can on the way back down — the Jersey native is a fairly new appreciator (not a bandwagon fan, he wants to be clear) of California basketball.

As for the NYC/LA transition in general: “New York’s always gonna be home to me, but every time I go back, so much has changed about Brooklyn — all these condos, cookie-cutter new restaurants, and the vibe of the city is just not what it used to be,” he says, “LA is a really hard city to get to know, but that also means there’s a ton of interesting new stuff to discover all the time. It’s starting to feel like home.”

Last but definitely not least: Don’t forget to check out the first Bay Area Record Label Fair, (or B.A.R.F., which is funny whether or not you are 12, admit it), at Thee Parkside on Feb. 15, the brainchild of SF promoters Professional Fans and the city’s own Father/Daughter Records. Some 18 different labels will be represented at the daylong affair, plus live performances from Cocktails, Dog Party, and others TBD. Oh yeah, and it’s free — so bite your tongue the next time you find yourself saying that everything in this city has gotten too expensive.