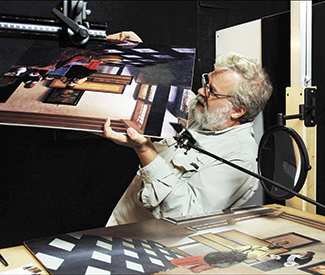 FILM “I’m not a painter,” admits Tim Jenison at the start of Tim’s Vermeer. He is, however, an inventor, a technology whiz specializing in video engineering, a self-made multimillionaire, and possessed of astonishing amounts of determination and focus. Add a bone-dry sense of humor and he’s the perfect documentary subject for magicians and noted skeptics Penn & Teller (longtime Jenison pal Penn “hosts,” while Teller directs), who capture his multi-year quest to “paint a Vermeer.”

What now? Yep, you read that right: Inspired by artist David Hockney’s book Secret Knowledge: Rediscovering the Lost Techniques of the Old Masters, Jenison became interested in the theory that 17th century painters used lenses and mirrors, or a camera obscura (a device familiar to anyone who’s ever been to San Francisco’s Cliff House), to help create their remarkably realistic works. He was especially taken with Vermeer, famous for works like Girl with a Pearl Earring (1665), feeling a “geek kinship” with someone who was able to apply paint to canvas and make it look like a video image. It took some trial-and-error (and one great bathtub “Eureka!” moment), but Jenison soon figured out a way that would allow him — someone who barely knew how to hold a brush — to transform an old photograph into a strikingly Vermeer-like oil painting.

From the film’s early moments, it’s apparent that Jenison, who can fix anything and is obsessed with knowing how things work, is of the “go big or go home” school of thought. Witness his comically giant pipe organ — constructed of organs scavenged from multiple churches — which he plays using self-taught skills gleaned from careful study of a player piano he restored during his Iowa childhood. So when he decides to paint a Vermeer, specifically The Music Lesson (1662-65), he refuses to half step in any way, declaring that he’ll only use materials Vermeer would have had access to. He’ll grind his own pigments and glass lenses, and construct an exact replica of the room in Vermeer’s house where the painting was made.

A trip to Delft, Netherlands, is arranged, with time spent studying the light, architecture, layout of Vermeer’s studio, period-appropriate furniture and pottery, and Dutch (he eventually learns to read Dutch). He also jaunts to London to discuss the project with Hockney (“It’s very clever!” the esteemed painter chuckles over Jenison’s technique), and catch a glimpse of the original painting, concealed from public eyes deep within Buckingham Palace.

Back in the San Antonio warehouse he plans to transform into Vermeer 2.0, he chats with Philip Steadman, like-minded author of Vermeer’s Camera: Uncovering the Truth Behind the Masterpieces, a book Steadman says caused “great anguish” among historians. It was controversial, he notes, to suggest that Vermeer didn’t just grab a brush and paint what he saw; this “alternate history” challenges the common perception of how an Old Master worked. But technology creeps into every aspect of Jenison’s project, with both uber-modern sophistication (3D computer modeling to make sure the proportions of his “music room” exactly match the original painting) and 1600s flair, as Jenison stares into the humble mirror that allows him to replicate his subject on canvas.

Jenison’s attention to detail is staggering; a montage compresses the 200-plus days spent assembling each piece of the room by hand. When the actual painting finally begins, the movie is two-thirds over — a smart filmmaking choice, since as Jenison, ever the jokester, admits, “This project is a lot like watching paint dry.” In many of these scenes, Jenison films himself laboring over the work’s many tiny, precise details, including individual stitches on a rug.

Slow moments aside, Tim’s Vermeer is otherwise briskly propelled by the insatiable curiosity of the man at its center. Jenison’s finished work offers more proof than any theory ever could about how 17th century artists were able to “paint with light” so realistically, but it avoids concluding that Vermeer was more machine than artist. Instead, it offers a clear challenge to anyone who subscribes to the modern notion that “art and technology should never meet.” Why shouldn’t they, when the end results are so sublime? *