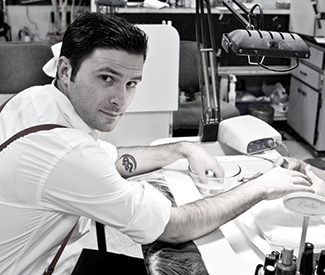 Next week is the Guardian’s fab annual Goldies issue, a wall-to-wall celebration of up-and-coming artists. And there’s no room in it for your beloved Super Ego (old). So here’s looking ahead to the next hot fortnight’s-worth of shindigs. Of course, the biggest hoot of all will be the Guardian 25th Annual Goldies party (Fri/21, 8-11pm, $10. Folsom Street Foundry, 1425 Folsom, SF.) DJs Primo and Wam Bam Ashleyanne will do a special soul-groove “golden oldies” set — and it’s $10 for all the beer you can drink. Plus, duh, the coolest people. Stick it in your calendar, already.

Talk about heartthrobs, yum. This cutie brought major sexy back to dance floors when he slowed tempos down to a crawl and let everyone stretch out. Now he’s all about crooning live and steaming things up with Tom Croose as the Worst Friends duo — also appearing at this As You Like It lovefest.

That thing where a DJ is also a magician, creating a whole new psychedelic-ecstatic universe out of common sounds, rearranging how you hear music forever. He’s also Spanish and wears a lot of tinfoil over his face for photos. At the Icee Hot party.

There is a thing called Bear Weekend with a long and dramatic history (let’s not get into it) — and here’s this year’s fun-furry climax: DJ Bus Station John turns the Eagle leather biker bar into a glorious old school gay disco evening t-dance. Bring your own chic towel, but no Schick razors, please. “Endorsed by the Tamale Lady,” fyi.

“Rare groove” would be nothing without this absolutely incredible, omnivorous DJ. And neither would Diplo. Experience a Whole Earth Catalog of sounds in his mindblowing sets. I love him.

If you know anything about dance music, you have probably just wet yourself. If not, let’s be clear: One of Detroit techno’s most poetic innovators and one of the best disco, house, and dub producers of all time will be on the decks, as part of Red Bull Music Academy Bass Camp 2014.

Happy eighth birthday to the Lights Down Low party. And happier birthday to us dancers! LDL’s bringing in this true legend, basically one of three guys who invented techno — from Detroit, duh — and changed the world forever.

PUT ON THE BREAKS

I’ve been wondering when this would happen. A breakbeat revival has been hitting the underground rave and techno connoisseur scene for a couple years. Now there’s an official dedicated party. Noice. With Kapt N Kirk, Tamo, Nerd Nate, and more.