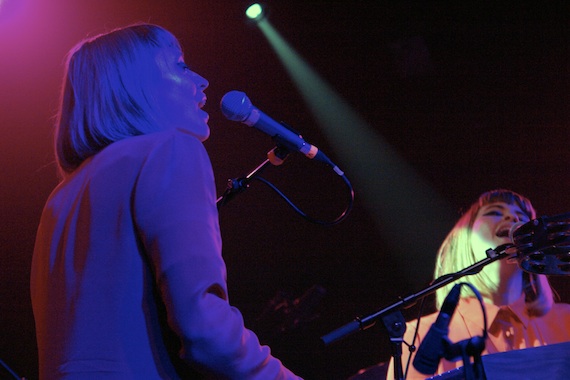 Ok so listen. Tonight I saw this band at the Independent. Two girls. Super cute. All hip in matching red dresses. They sang together like they were related. Don’t think they were though.

The shorter one was totally flirting with the drummer. Bet they’re dating. Or worse: Married.

My buddy in New York has raved about them for years. And then I saw the Shook Twins cover their song at Cafe Du Nord a few months back. “This is a Lucius song,” they said. All of that means they must be legit, I thought. Definitely were. Holy schnikes the songs. Not to mention their guitar player crowdsurfed.

Apparently the girls in the band (Jess Wolfe and Holly Laessig) met where most young confused musicians meet on the East Coast: Berklee in Boston. But then they fled the frigid northland for warm tropical Brooklyn, New York where they are now based. To give you an idea: they both stand facing each other in the middle of the stage, dwarfed and mirrored by their new but quickly iconic backdrop, playing a smattering of keyboards and tom drums. They have three dudes backing them up (Peter Lallish, Dan Molad and Andrew Burri) on two guitars and a strange but advanced kick-drumless drum set.

They encored the show by going in the middle of the crowd around one mic and singing two songs — like all singers should be able to do (but most can’t). “Two of Us on the Run” was a fantastic one. I’ll play that later tonight on the record I bought. Reminds me I need to move my record player from the living room into my bedroom. For that song.

The opening band was better than great. Seriously. They were called You Won’t. I bet they’ll headline this place in their own right in like three months. They came out in wigs dressed like Lucius. Brilliant. Who does stuff like that these days. A few songs in the singer goes, “You guys smell great…hint of lavender here, whiff of thyme there. I like a tidy cohort and San Francisco, you’ve really delivered.” Sold.

Raky Sastri and Josh Arnoudse are it. Just two guys. I could see them as supporting characters in a college movie with Tom Green. On stage, the pair aren’t beholden to specific instruments but they tend toward drums and a Telecaster respectively. But they also tickled and blew a harmonium, harmonica, and musical saw as well as other stuff I’ve never seen. They are self-described “Massholes,” which is both a testament to their sense of humor and a great way to figure out where they are from: Cambridge, Massachusetts.

They covered some familiar songs — “Two of Us” and also “Can’t Help Falling in Love” sung through some sort of car hose or pool toy. It was awesome. Their originals were the best part though. “Television” and “Who Knew” are on their record. And then they did some new stuff that I didn’t recognize from the album I legally downloaded. But I liked it all a lot.

Long story short, Lucius and You Won’t were both phenomenal, drew a sold-out crowd of outlandishly attractive girls, and are the reason I accidentally had a couple more beers than I planned to. Otherwise I’d be in bed by now, sad and songless.

I have work in the morning I think.